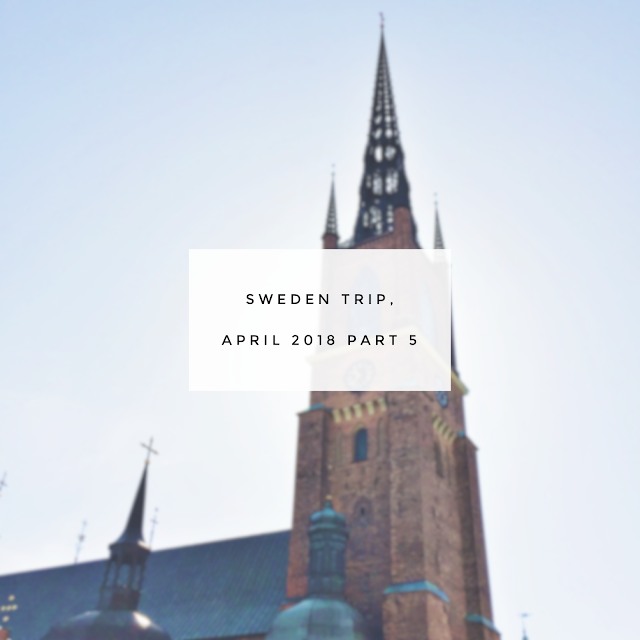 The posts for this trip are stacking up. We did spend two weeks in Sweden, so trying to compile two weeks in Sweden into one or two posts just would not give it justice. Our second full day in Sweden began at Joe and the Juice. I wanted to go to this coffee shop and juice bar back in Reykjavik, Iceland at the Keflavik airport. I was so excited to see a Joe and the Juice just down the street from our hotel. We had passed by it the day before, as it is kitty-corner from Espresso House. It was a nice treat. Coffee in Sweden is inexpensive and the Swedes consume the most coffee out of everybody in the world. It makes sense to have a coffee shop or two on every corner. They need variety!

We were on our way to yet another walking tour, meeting at the same place as the day before: Centralstation. Today, we were going around a lot of Stockholm, not just Gamla Stan. I was so excited to see more of Stockholm because it's a big city and without a guide, it can be pretty overwhelming to know where to start. We walked along the outer portion of Gamla Stan to begin with seeing the City Hall of Stockholm on the island of Riddarholmen. It is a tiny island that breaks off from Gamla Stan in Stockholm, home to the medieval abbey which is also called Riddarholm Church which was used as royal burial grounds for the Swedish royal family. Also on the isalnd of Riddholmen are other Swedish governmental buildings and the Supreme Court. It holds small palaces, the Chancellor of Justice and Parliament! The island is isolated from the main island of Stockholm (Norrmalm) by the motorway known as the Centralbron. The Riddarholm Church is one of Stockholm's oldest buildings and it is the building that I was absolutely amazed by when I first arrived in Stockholm. The spire is something to see in person! 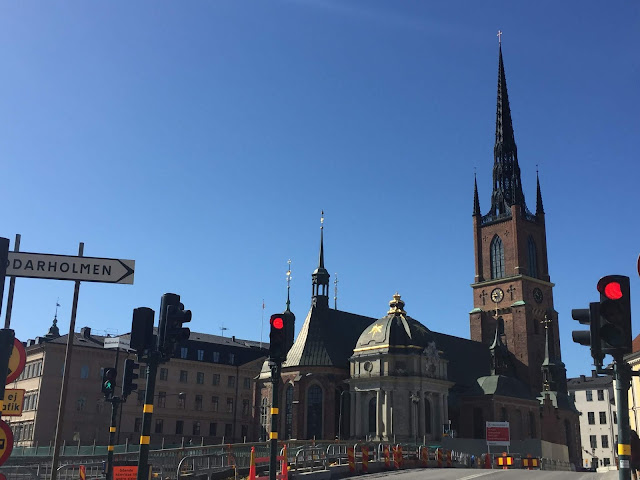 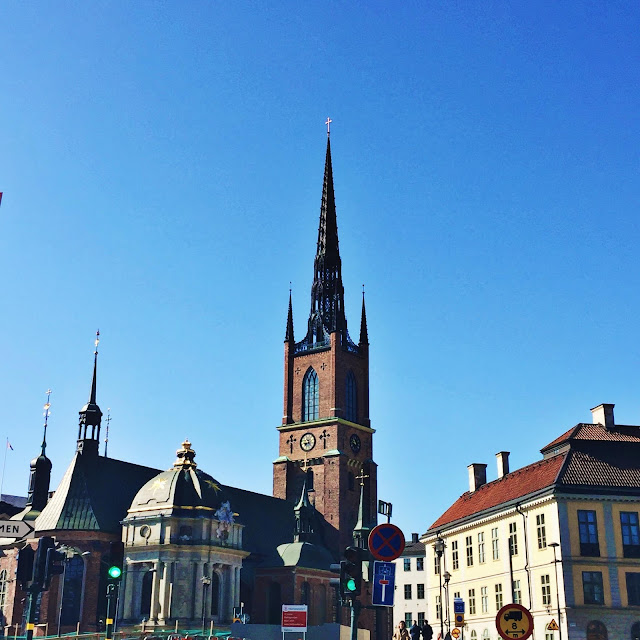 The day before, we had gone on the other side of the Royal Palace in Gamla Stan, well on this day, we went to the front of the palace where there were guards pacing back and forth. There was actually an incident where someone got too close to the line where tourists must stay behind, and the guard raised his voice at the tourist as a warning to get behind the line. We learned all about the Swedish Royal Family, and how they wanted to be just like normal people. One of the Swedish princesses married her personal trainer, so the tour guide compared Princess Victoria's story to Prince William's story on how he married a commoner. It is more accepted in today's world than it was back in King Gustav's world. 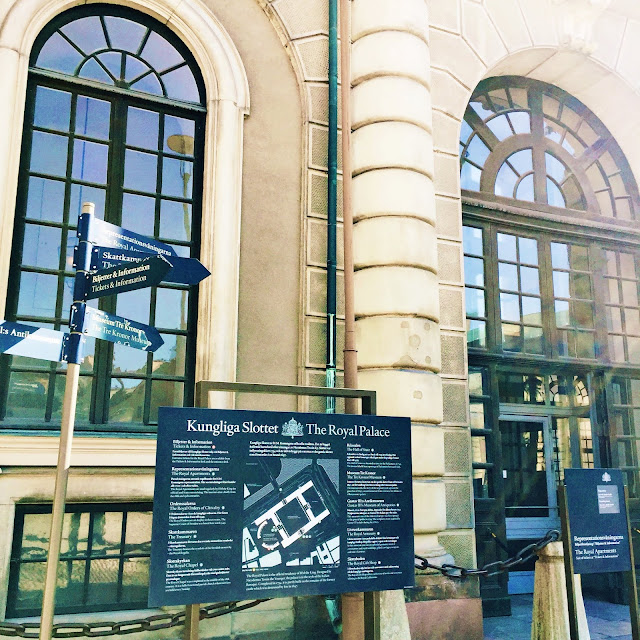 Our tour guide, Celia took us to the Prime Minister's home, the Operan (opera house), the Kungsträdgården (King's Garden) where the cherry blossoms were supposed to be in bloom, but sadly were not. The two hour walking tour ended on the island of Östermalm at the Dramaten (The Royal Dramatic Theatre). It was on those steps that the walking tour said farewells (we became a little community for those two hours). My dad started talking to one of the gentlemen in the walking tour and he ended up being from Salem, OR and my dad and him shared a mutual friend! It was so bizarre. Stockholm is such a large city with many islands, and Östermalm is such a gem in Stockholm. As we explored Östermalm, we were told to try a famous French Hot Dog by the guy from Salem, OR, so we stopped at a hot dog stand and tried one. They were actually so delicious!
We walked by the Hotel Diplomat which was behind the hot dog stand. The Hotel Diplomat is actually in an area of Östermalm called Diplomatstaden, very appropriate. The strait of water that bordered Östermalm is the Djurgårdsbrunnsviken, which when you cross that, you arrive at the Nordiska Museet! The Nordic Museum! There are so many museums in Stockholm and we didn't want to spend our time inside many museums for this trip but we thought going to the Nordic Museum would be a lot of fun and I'm glad that we went. 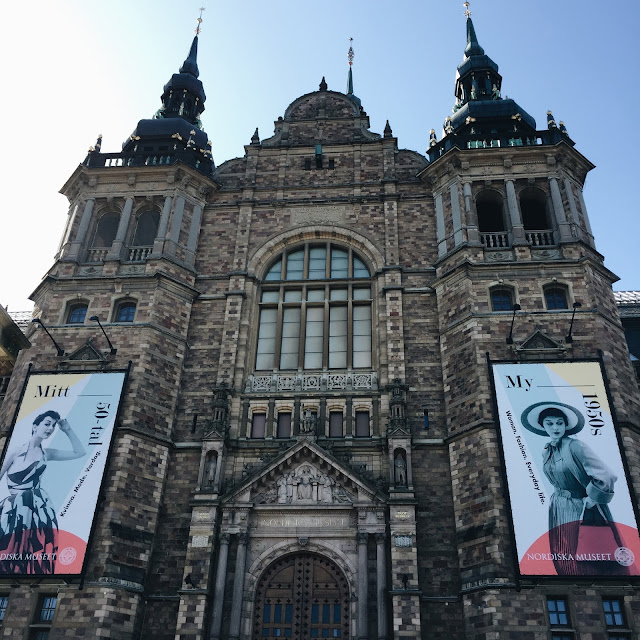 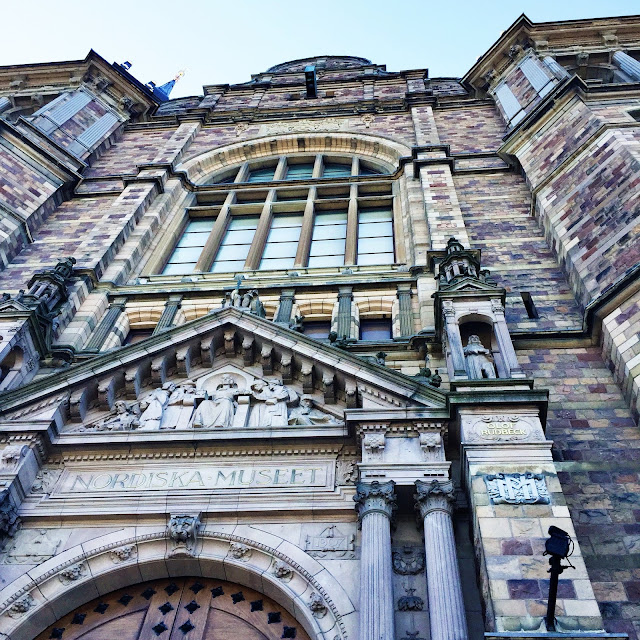 In the Nordiska Museet, there were exhibits that went through the fashion history of Stockholm and other exhibits that showed the way of life throughout the years in Stockholm and the surrounding areas in Sweden. The whole museum was filled with artifacts, art, and replicas of homes and rooms that represented the way people used to live in Sweden and Stockholm. There was a hallway of the different holidays that the Swedes celebrate and a room that showed how the indigenous Sámi people lived. It was a really fascinating museum and I'm glad we decided to go there.
We thought we knew how to get back to our hotel but we got "lost". That was perfectly fine because getting lost while you are on vacation in Stockholm is part of the adventure. We could have easily programmed our GPS to tell us how to get back but we decided to wander around instead. We ended up on the other side of the Kungsträdgården where lovely shops and vendors are situated. There was a mall, Gallerian, that we found ourselves in and they had the sweetest little bakery in there called Gâteau. I saw the punsch rolls and chokladballers and I had to indulge. 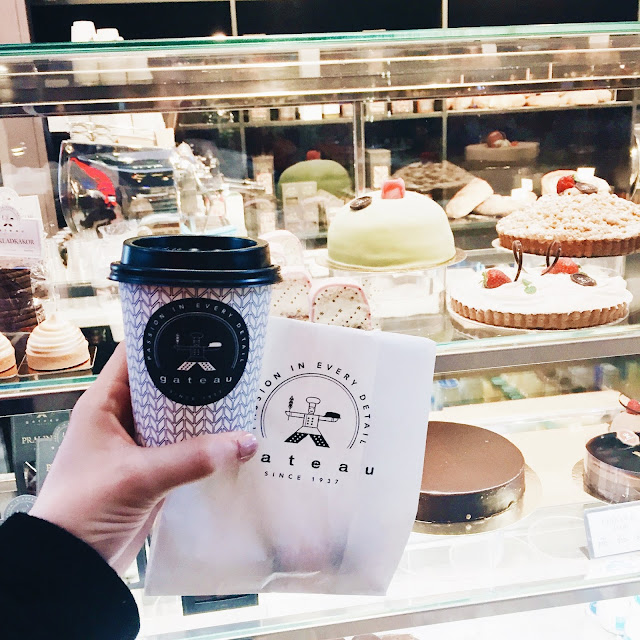 We finally found our way back to a street that was familiar and nearby our hotel. So we made our way back, got ready to go out for a nice dinner, and began walking again to the place we had originally decided to go. There was not a table available in that restaurant, they actually turned us away because they were so full (I guess we should have made a reservation). This began our long journey to find a restaurant with a table available that was also delicious. After searching for probably 45 minutes and walking another two miles, we came across an Italian restaurant along the main shopping strip of Norrmalm called Zola de Pollo. At this point, pasta and red wine sounded so perfect. It was actually quite funny because at first we ordered waters. We figured they would bring us glasses of tap water like normal restaurants do... that was not the case. They brought us bottled water which costed more than a glass of wine! So, we said no to the waters and sipped on our free water (from the tap) that came with our wine. We were going to order wine anyway but once we realized that is how we were going to get free water, it only solidified the decision to order wine as well. Interesting concept. 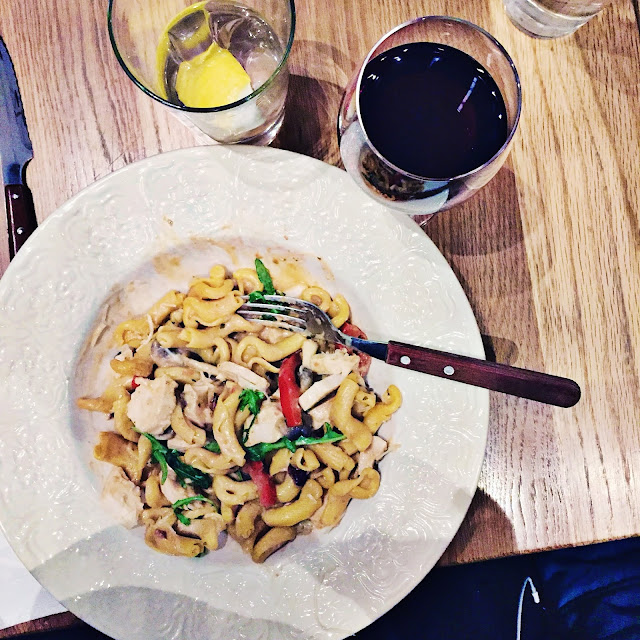 We finished up dinner and walked back to our hotel. I checked my fitbit and we had walked a total of 28,465 steps. It was quite the day!
Labels: life Travel