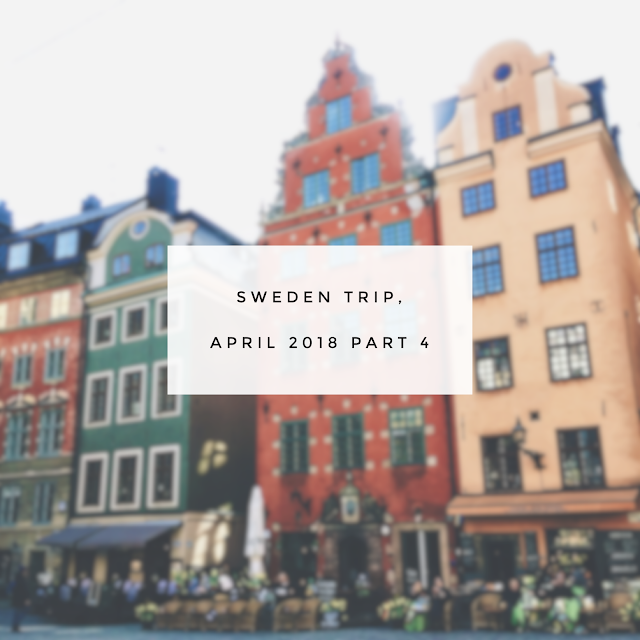 Our second day in Stockholm was a very long day. We went on a long walking tour and spent the day in Gamla Stan. I took so many pictures on this day but since it has been over a year and a half since I went, there have been some deleted photos that I wish I had kept. I kept the important ones and supplemented photos to help explain some of Stockholm's history that we learned during the walking tour. There was just so much history to be captured and so many neat photo opportunities. This day in Stockholm was probably one of my favorite days during the trip. 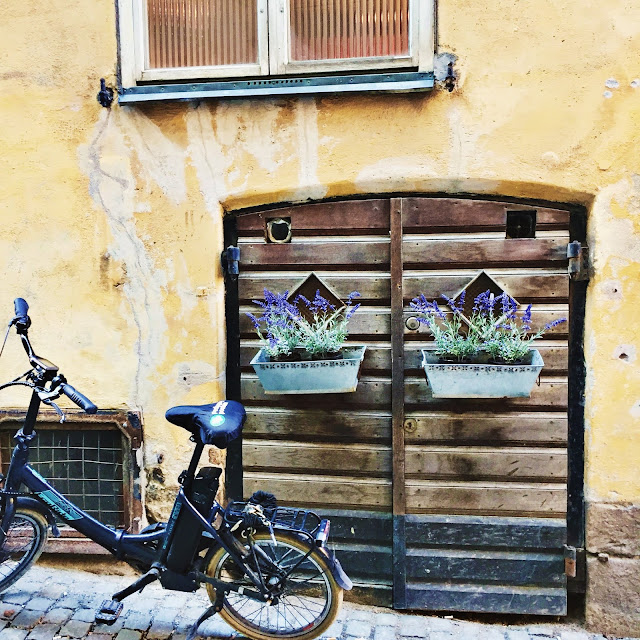 While we were in Stockholm, it would get moderately cold but it was never too cold that we were miserable. After all, it was in April and the cold weather during this time in Stockholm had was a rare happening. It was supposed to be a little warmer than it was when the cherry blossoms were supposed to be in bloom. I guess Winter wanted to last a little longer in Sweden that year.

Before we started our walking tour, we stopped at Espresso House so my dad and I could get some coffee. These Espresso Houses are like Starbucks there. They have a couple of Starbucks of course, but Espresso House is their Starbucks. There is one on every corner! It's pretty good coffee too. 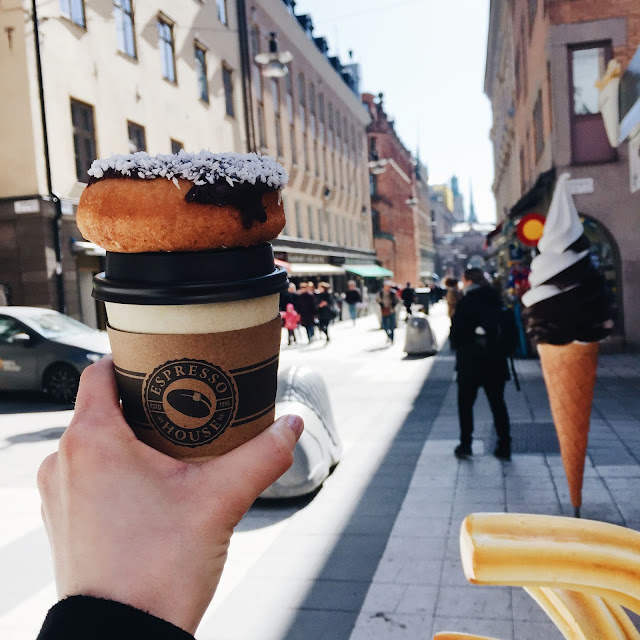 We walked through the shopping district of Norrmalm (the island we were staying on in Stockholm, as Stockholm has fourteen islands) to get to Gamla Stan. We had to be at the meeting place for the walking tour to gather, which was near the entrance of the subway, so we got there early. The rest of the tour gathered and the tour guide showed up. These are free walking tours in Sweden. They are ran by donation only and they are just college students who love history and volunteer their time to guide tours in Stockholm. It's nice that they have those tours available for tourists to utilize.

The walking tour was very informative. We walked through Gamla Stan and she explained the little details that we kept seeing on the buildings, such as decorative ankarslutar, or "anchor plates". The more decorative they are on buildings, it was a sign of financial wealth, so that person, or family had more money to make them decorative. If you didn't have a lot of money or didn't care to make them decorative, they just looked like an "X" on each floor of the building. What the anchor plate does is it holds the wooden beams in the building which then holds up the whole building. They keep the integrity of the structure together.

There was also a little iron stamp above the doors that we kept noticing. That emblem is something that people would purchase to put on their home. This was the equivalent to fire insurance when these buildings were first built. If there was a fire, the buildings or the homes with the iron stamp above the door would be the first one to be put out and the owners of the home would receive help in rescuing their belongings. I thought that was extremely interesting.

We also saw a portion of runestone, which is a stone that holds ancient viking carvings. It is believed to be from one of the Iron Age settlements and there are other clues found on Norrmalm and Sodermalm (other islands in Stockholm) that lead to the origin of this stone. As it is a fragment of a larger piece and with the stone being so heavy, it is hard to transport to get a proper translation of the stone. The stone gets touched up with red paint every so often to make the viking alphabet stand out. 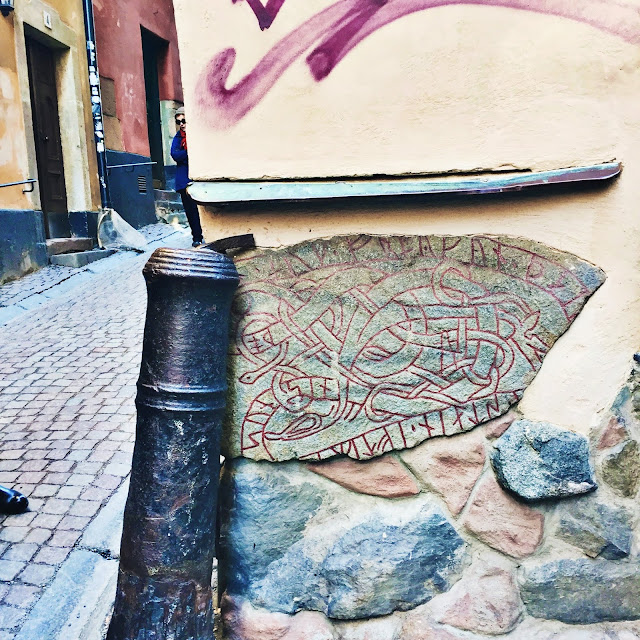 The walking tour then lead us to the German Church, or St. Gertrude's. Absolutely beautiful steeple. This church took six centuries to complete! It is definitely a steeple that one would expect from a religious building built in the middle ages. It is gorgeous. 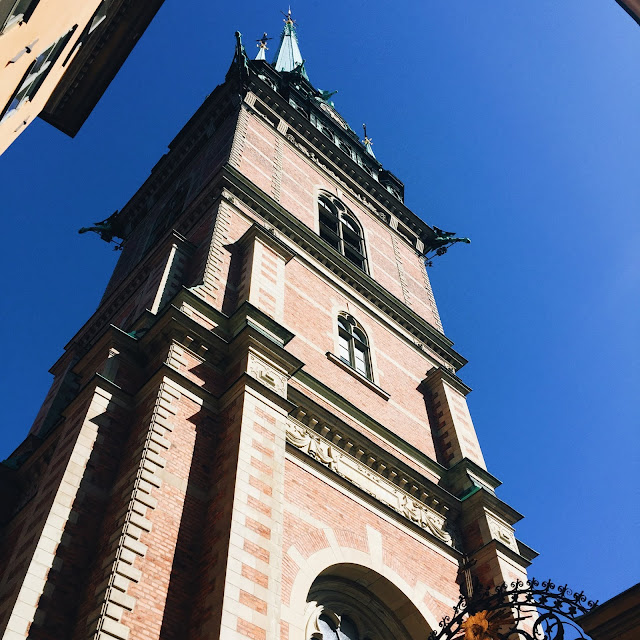 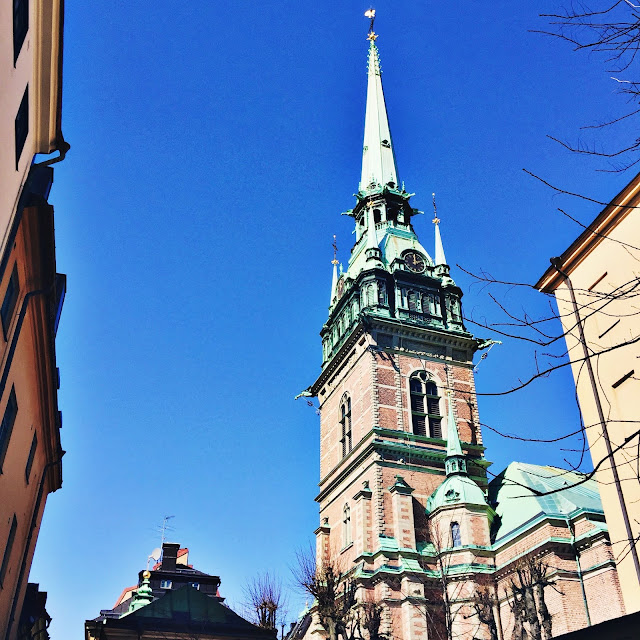 Of course we walked by the smallest street in the world, the Royal Palace, Järnpojke or Iron Boy which is the smallest public (or open-air) monument in Stockholm. People give him little gifts in order for wishes to be granted, they also say that rubbing his head is lucky, so of course I partook in the tradition. We walked by the second oldest restaurant in the world and I discovered there was another Hemköp near by. I was excited to go inside after the tour was over. Our last stop of the walking tour was Stortorget, which is the oldest square in Gamla Stan and it holds a sinister story. If you have ever seen Game of Thrones, the Red Wedding was inspired by the gruesome events that took place in Stortorget. You can read a synopsis of the story in the caption of the photo of Stortorget below.
Stortorget is where the tour ended, so we spent some time taking pictures there and then deciding on where to get something to eat. My mom and I wanted to Fika, I was needing coffee and I had been craving a punsch roll, so there a little coffee and pastry shop right off to the side of Stortorget, so we stopped there. They had a beautiful assortment of pastries and they even had the Swedish favorite - Princess Cake - the marzipan covered, green cake was delectable and I'm not normally a cake person, but Princess Cake is amazing.
After Fika, we went around to the areas from the walking tour that we wanted to spend a little more time at and grab more pictures. While we were on the walking tour, it didn't allow us to get quality pictures because the amount of people we were walking with, there were going to be people in the shot and not so much the actual subject we wanted to capture, so going back on our own allowed us to get all the photos we wanted. As we were exploring Gamla Stan on our own, we came across this delightful, little shop called Amaretti Virginia that sold various flavors of the Italian cookie: amaretti. I wanted to give it a try. 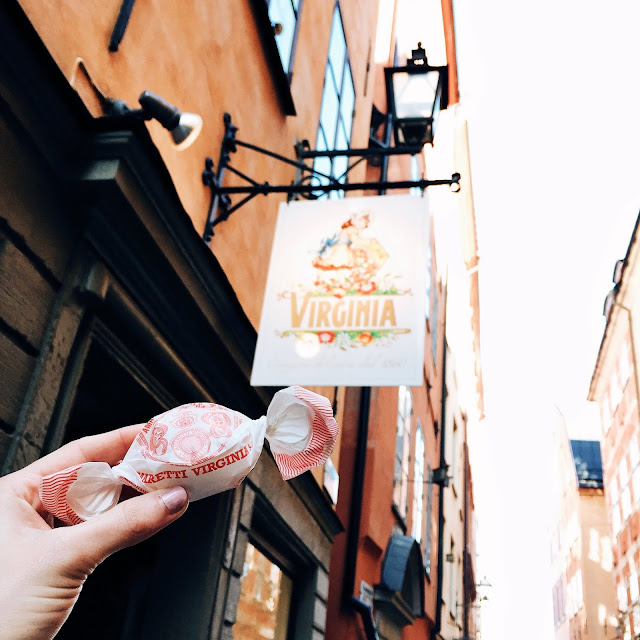 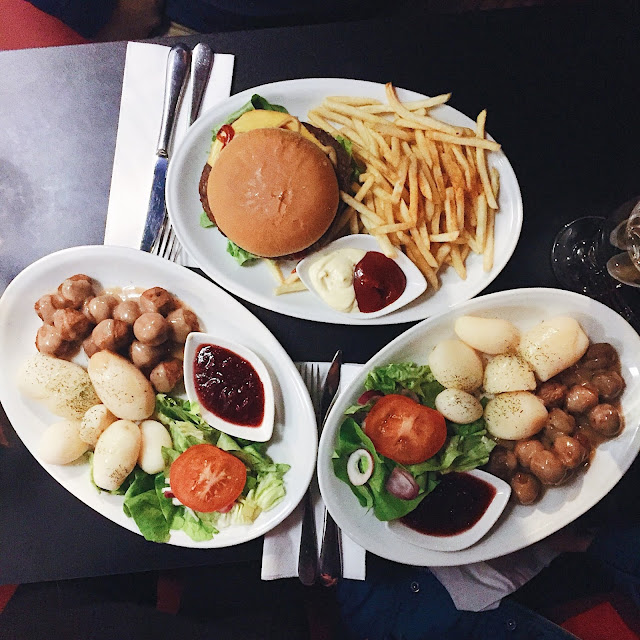 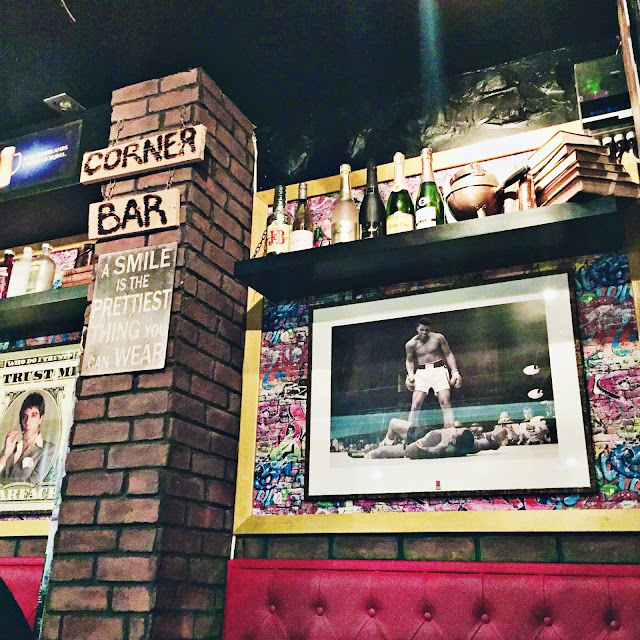 A nice family dinner over traditional Swedish meatballs was a great way to end the long day. On our way home, we stopped at Hemköp (the one under Åhléns near our hotel) and I bought some packaged punsch rolls and other delicious pastries. I could not get enough of those punsch rolls. To this day, I still love those Swedish treats.
Labels: life Travel