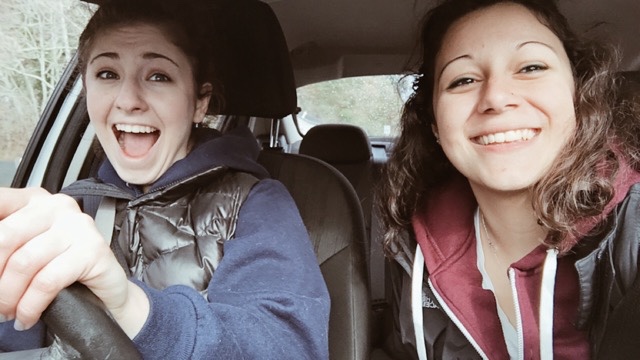 Above is the "dangerous" photo we took. Not that dangerous... Driving 25 miles an hour through Garibaldi. I looked real quick for the quick snap then back on the road my eyes went. Before heading to Pacific City, we made a quick stop at the Tillamook Fred Meyer to get my car key copied. I have been meaning to do it for the 6 months I have owned my car, and I decided to get it done in Tillamook. It is smart just in case I lock my car keys in the car, I can have a spare. Back in Rockaway, there were a couple incidents that I almost left my keys in my car. Glad I didn't! After our pit stop in Tillamook, we drove thirty minutes to Pacific City, and had loads of fun there!


When we first arrived in Pacific City, we pulled into the beach access parking lot and saw the Nestuca Fire Department, All-Hazards Rescue Team parked there too. We had a little scare, and were in wonderment of what could be happening, but then learned that they were just doing drills and training. Phew! We went about our picture-taking plans. When we first arrived in Pacific City, it was starting to rain a bit, and it was so chilly down by the water. I brought the tripod down with us, and we had fun taking photos, even though we were shaking from the cold. 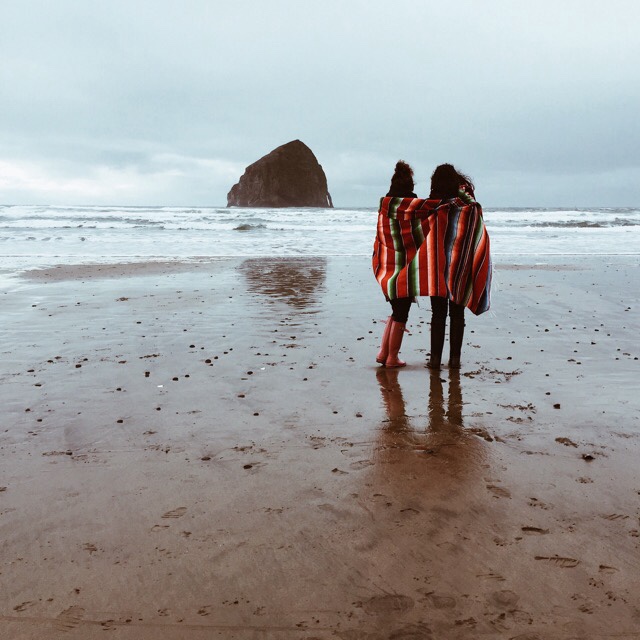 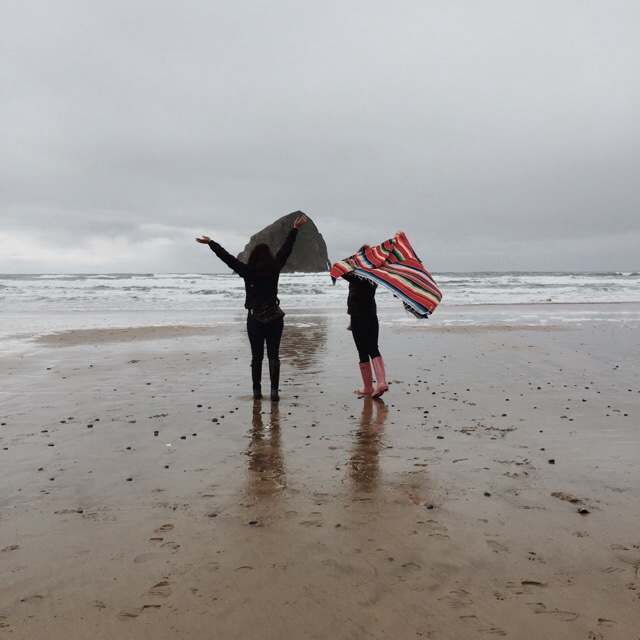 Again, we had to take this photo. 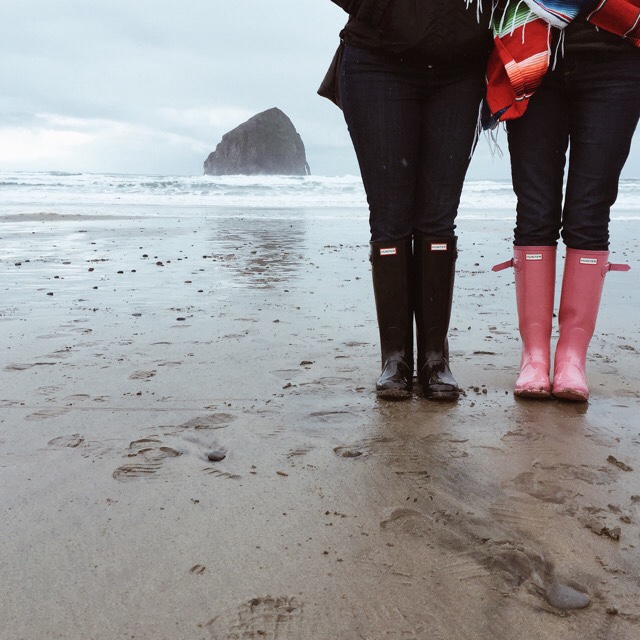 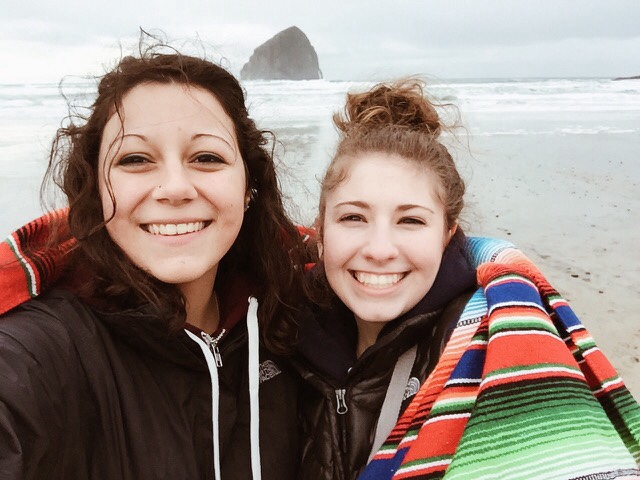 We were getting a bit hungry, and we brought our own snacks to keep costs down. We brought some 7-layer dip and chips from Saturday's festivities and decided to eat our snack beach front, but protected from the rain. So, we ate our Breakfast beach front, and our lunch beach front! We also used the lunch time to check in with family, post a photo, and for me to figure out my Norwex shopping spree. Thanks again to everyone who came and helped me to my goal! So awesome! Notice the travel cloths drying on the dash? Those cloths came in handy after using public beach bathrooms that provided NO soap. Well, the Norwex did a better job cleansing our hands than soap probably ever would. 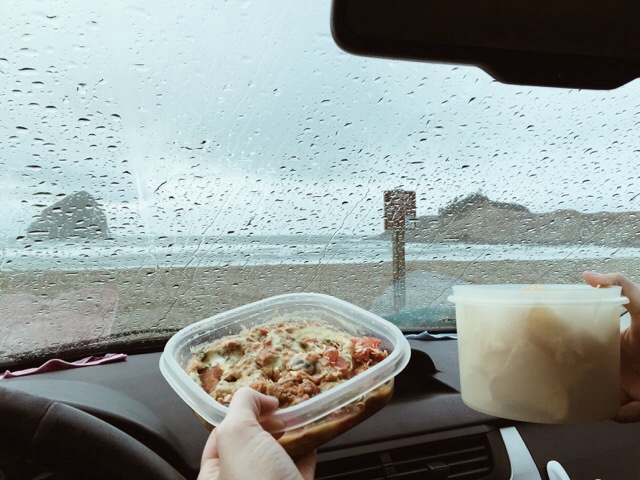 After the rain stopped, and we had eaten all the 7-layer dip and chips we cared to, we decided to drive around Pacific City. I wanted to show Brittany where my family stayed for my sister's 16th birthday. It was the trip that made me fall in love with Pacific City so much. I love the city's charm. Coming back into the main part of town, we pulled into the marketplace that has ice cream, seafood, the gift shop, and the swimming pool for the RV park. We both got a waffle cone of Espresso Mocha Tillamook ice cream. You can't visit a coast town that neighbors Tillamook without getting some of their ice cream. You just can't. I think it is an unspoken tourist law. 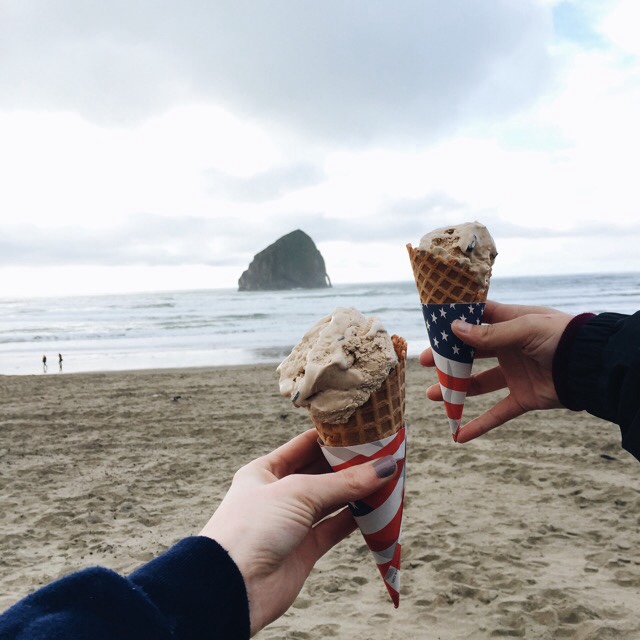 It warmed up around 2:30 pm, and we jumped around, splish-splashed in the waves with our boots, and had fun without chilling to the bone. 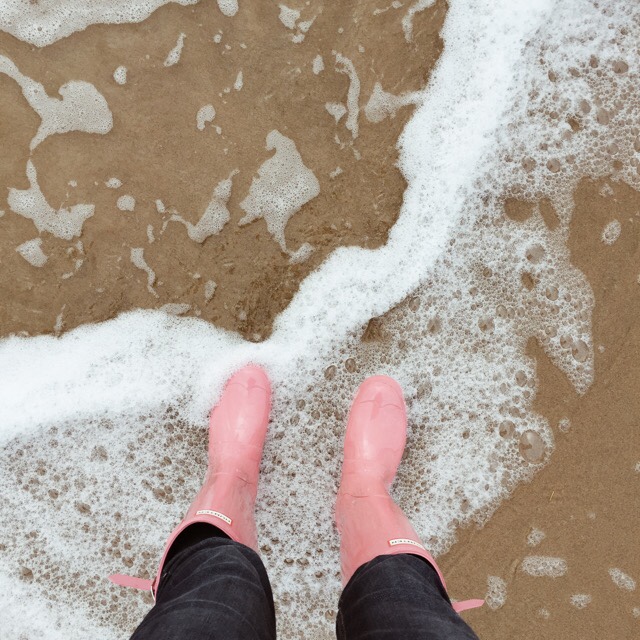 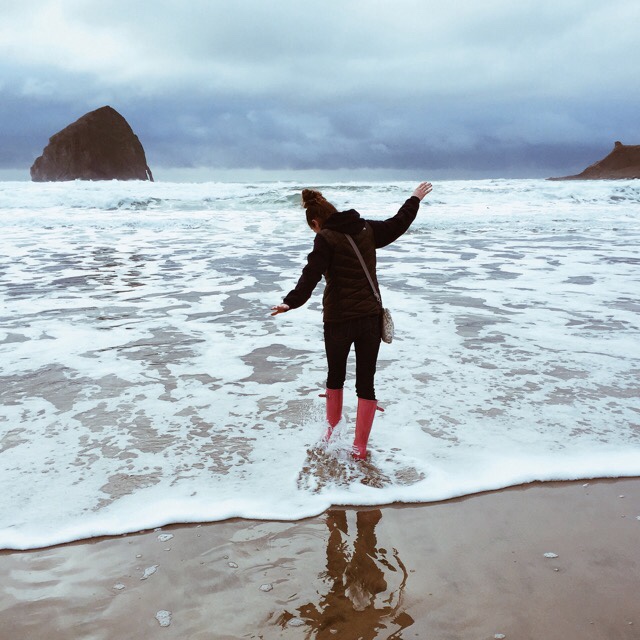 The Nestuca Fire Department and Rescue squad on the sand dune, there is their truck below with the red light. Another cool thing about Pacific City beach is that you can drive right onto the beach! We didn't drive on the beach with my little Ford Focus, for fear of not being able to get out. Best to just park and walk down. We had been driving all day anyway. It was nice to get out and kick around. 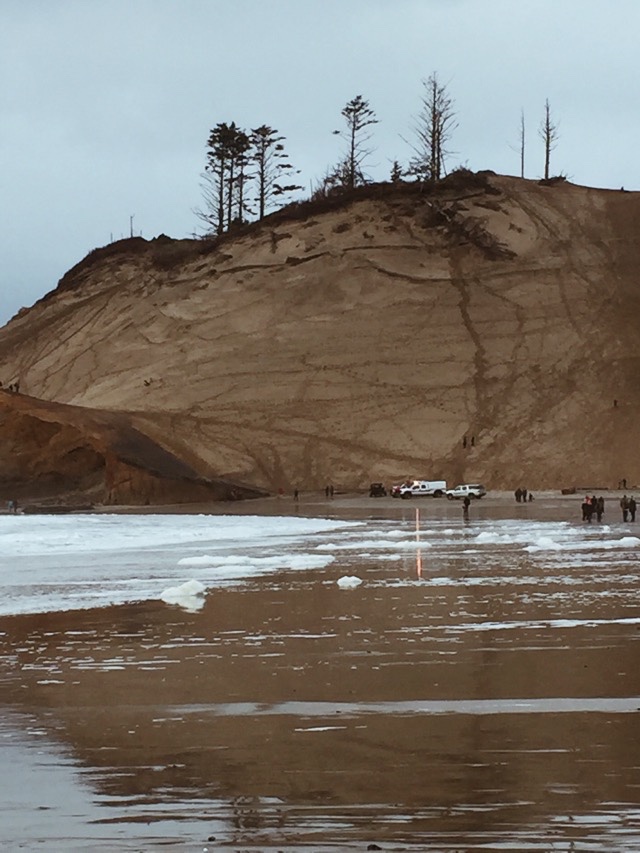 There were these giant piles of sea foam that looked like snow. It was fun to kick them, but they like to cling to rubber for sure, it was actually hard to wash off our boots. 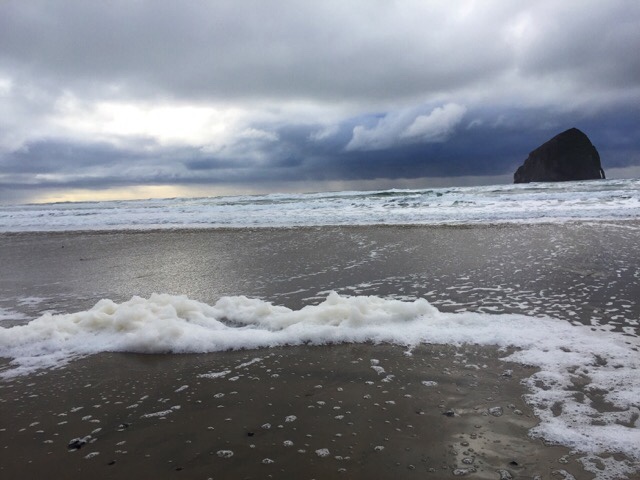 We went into Pelican Pub and Brewery in Pacific City, wanting to grab a bite to eat. We learned it was too expensive for us at the moment, so we decided to head back to Tillamook and find something to eat there. I told myself that we wouldn't visit either cheese companies during this trip, but I guess I couldn't stay away from my favorite, the Blue Heron French Cheese Company. My family and I have been here countless times, but have never sat down and ate there. So, I told Brittany that we should eat at the deli here, and it was such a great choice! 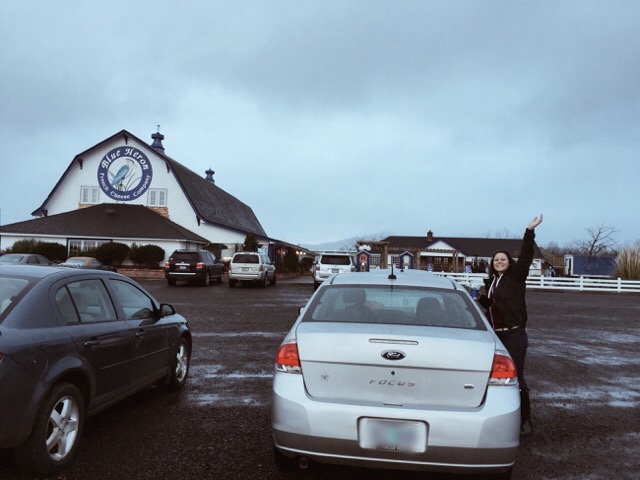 Britt got a whole sandwich, ate one half there and took the other half home. I got half of the Blue Heron Classic sandwich, and it was AMAZING, it was just perfect, and I had a delicious mocha in a cute glass cup with my sandwich. The Norwex cloths sure came in handy! 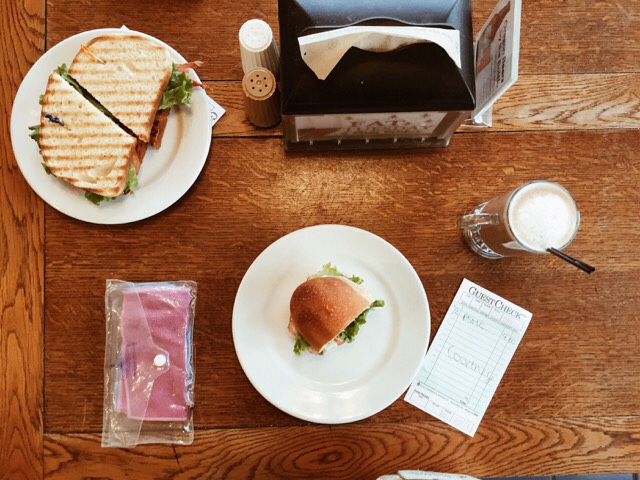 Not tired yet! Ha! Excited to eat! 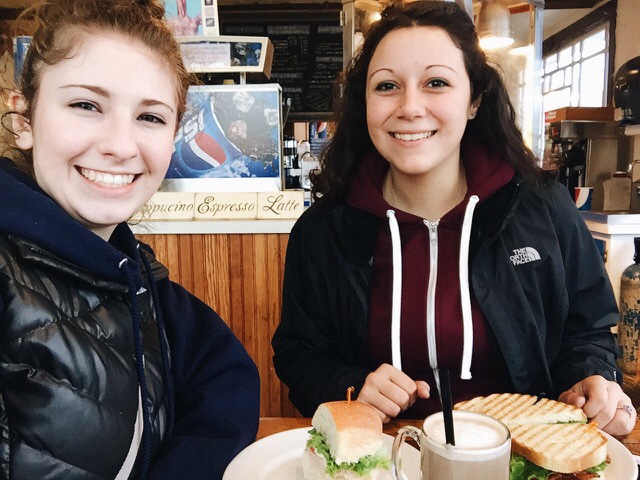 After we ate, we paid for our food, and I also bought a dip from Blue Heron. We have been coming here for years, and have never bought one of their signature dips. I finally did, and I am so excited to make it! 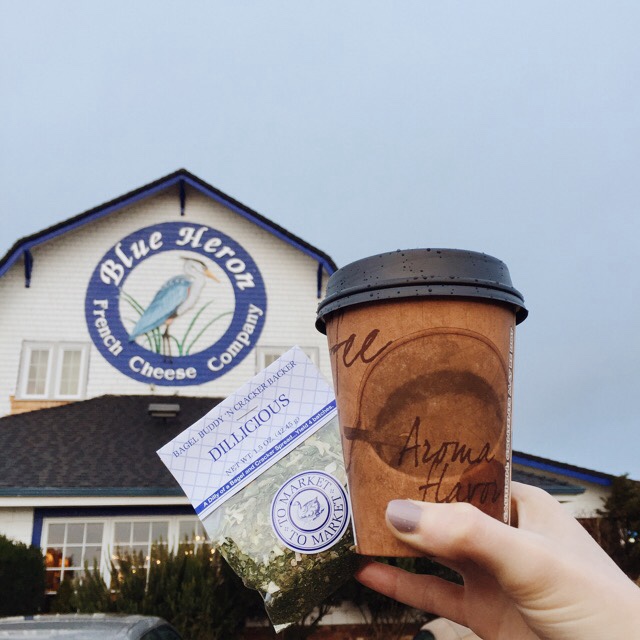 We were disappointed to see that the goats and sheep had been put in the barn for the Winter, because they are part of the Blue Heron experience. We were glad to see at least one animal out. This magestic bull. He was just munching on some grass. 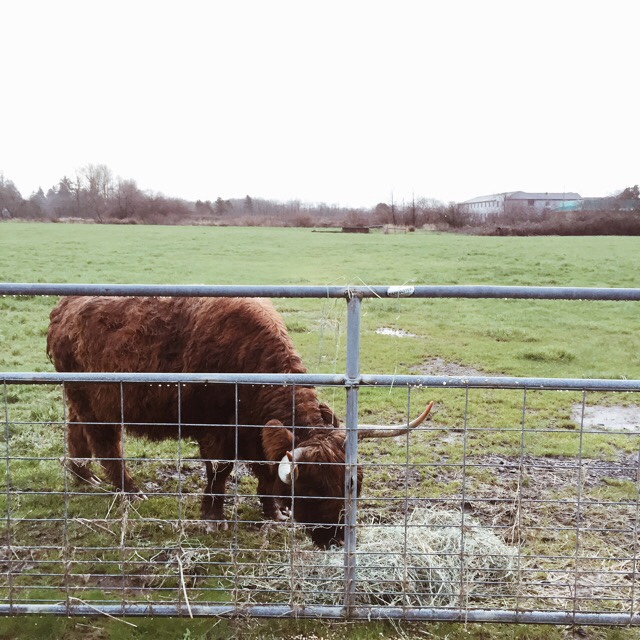 Smile! Kind of looks like he is actually smiling. (photo below) 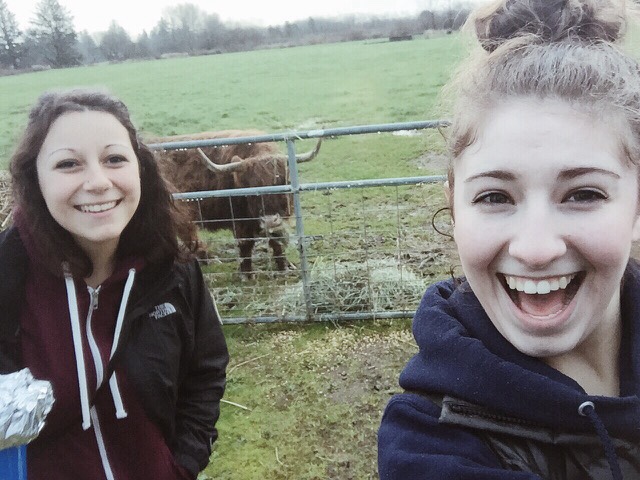 The road trip with Britt was so much fun! It was nice to get away from work, and normal, everyday life and visit the coast. The Oregon Coast is probably my favorite place on earth, and it always will be. It is such a special place to me, a lot of fun memories happened at the beach, and on the coast. It is so easy to get to from Portland! It doesn't take a lot of gas, and it doesn't take a lot of time either. I am so glad we both took the weekend off to venture out to the coast. Britt, we need to do this again soon!
Labels: life Travel