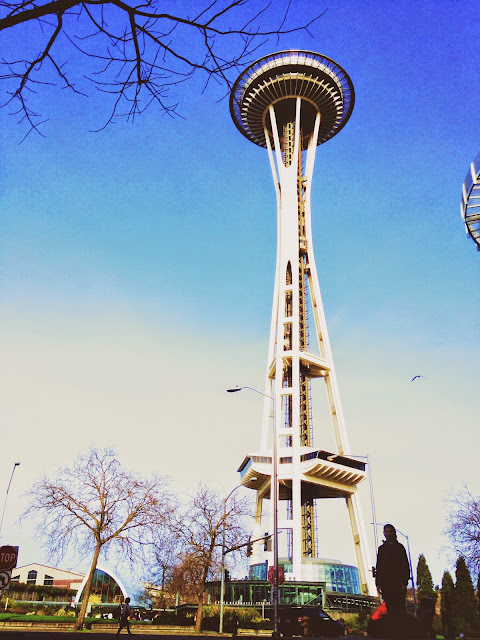 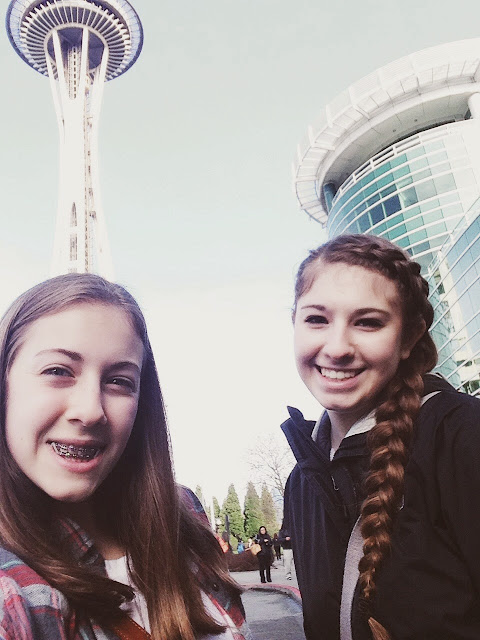 Before we drove to Pike's Market, my mom wanted to find a building for for her friend, she wanted to take a picture. As we were driving around, I noticed the downgrade and upgrade of the city. On Saturday evening, my dad commented about hilly streets in Seattle. He asked why would someone build a city on a mountain? It made me think. Seeing the downgrade and upgrade of the buildings answered it for me. I'm sure they didn't build it for uniqueness alone. 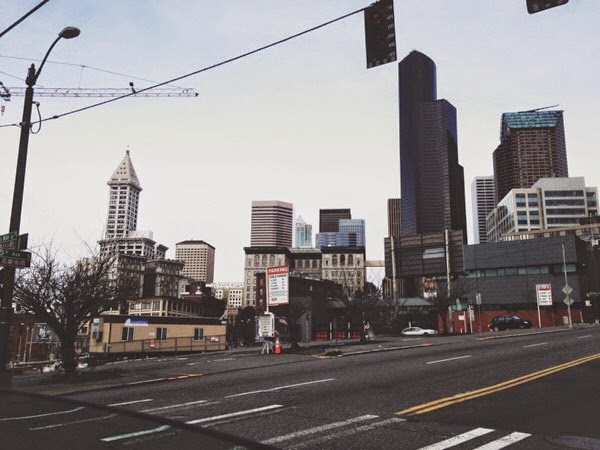 We made our way to Pike's Market, and we parked a few blocks away. As we were walking to the market, I noticed this beautiful conglomeration of an old building, and a new building. I was incredibly fascinated by this beautiful building. There was the old building residing, but built onto it was this new building, modern architecture, and breathtaking reflections in the windows. I was blessed to have caught this. If you look closely, you can see a metal sculpture garden. It something to see. I love architecture, design, and art, so this city has so much to offer in those departments. 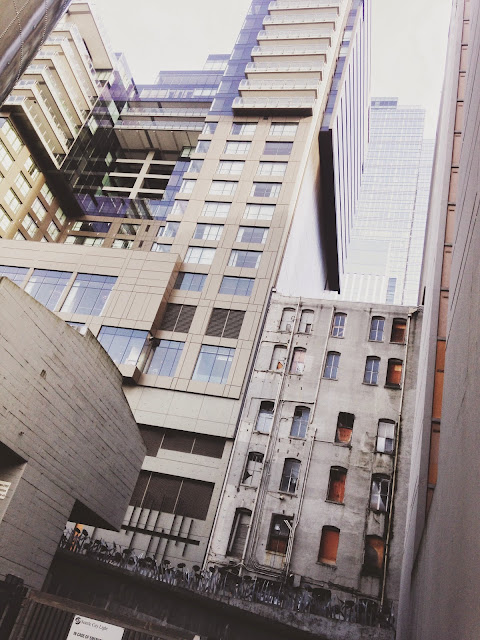 When we arrived in the market, we went to the fifth level where most of the action happens. We made our way to the Daily Dozen, and bought a dozen of assorted, mini doughnuts. My dad bought a pesto bagel from Seattle Bagel Co, and that was pretty good. It was a nice little breakfast in Pike's Market. We wanted to grab coffee from the original Starbucks, but it was PACKED! The line was out the door, and down the street. We decided to go grab coffee from the second Starbucks ever. It felt so natural walking around Seattle with Starbucks in my hand. Coffee drinking is an art to me. As we were walking ariund, we spotted a Target right smack dab in the city, they called it City Target, and had Seattle in big letters on the inside. I am a huge Target fan, and seeing a "City" Target sparked my interest. 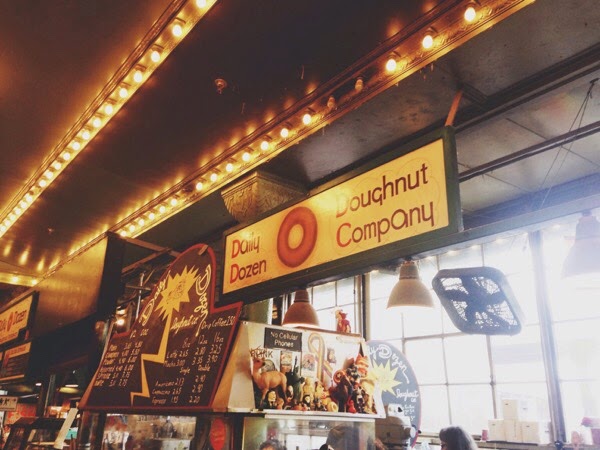 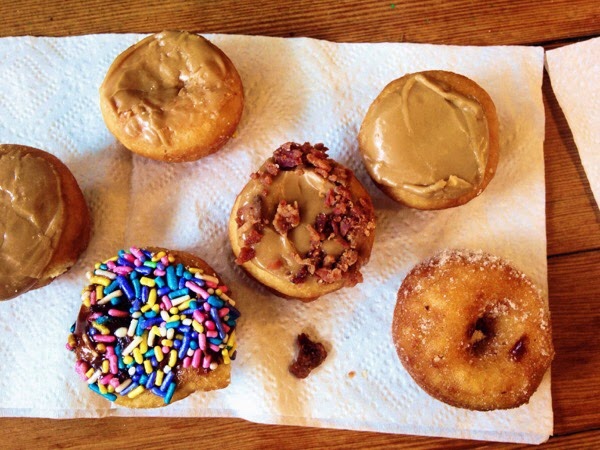 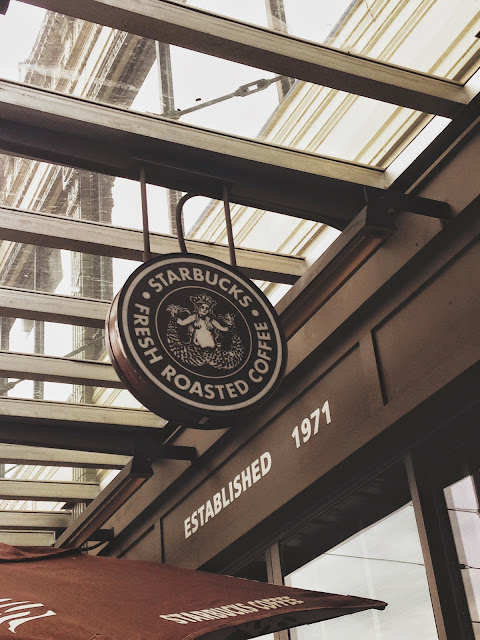 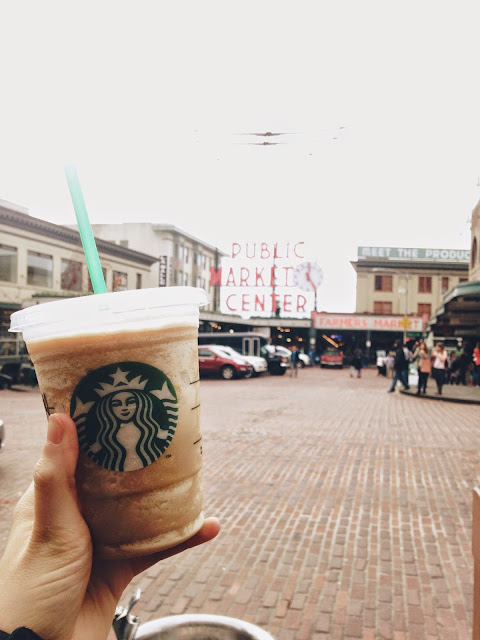 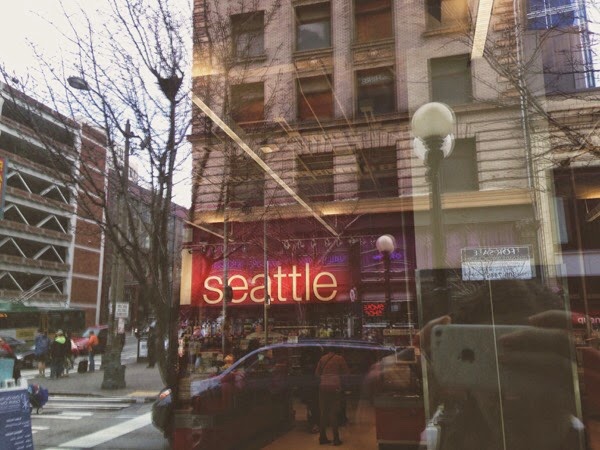 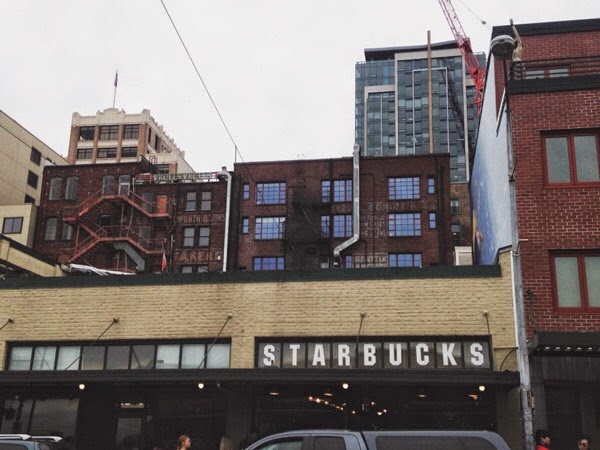 After coffee, and walking through some outside-the-market shops, we decided to venture back into Pike's. We sampled some produce, tried some chocolate linguini, and explored the vast market. We were trying to find a place to eat lunch, but everything was either overpriced or unappealing to us. We witnessed the fish toss as the world famous Pike Place Fish Co, we went out on a landing and caught a great view of the water, and made our way to what is probably the most disgusting build up of all... The famous gum wall of Seattle. 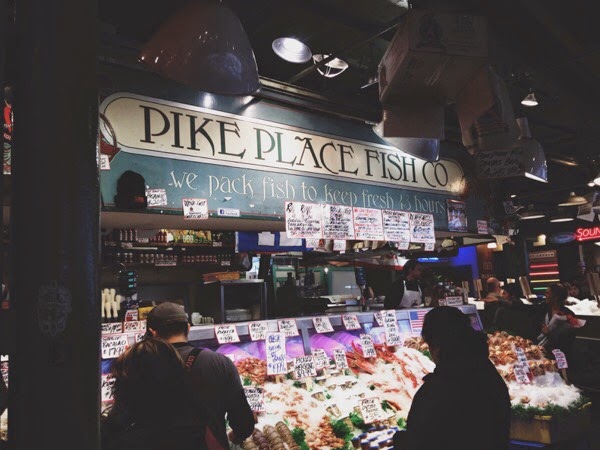 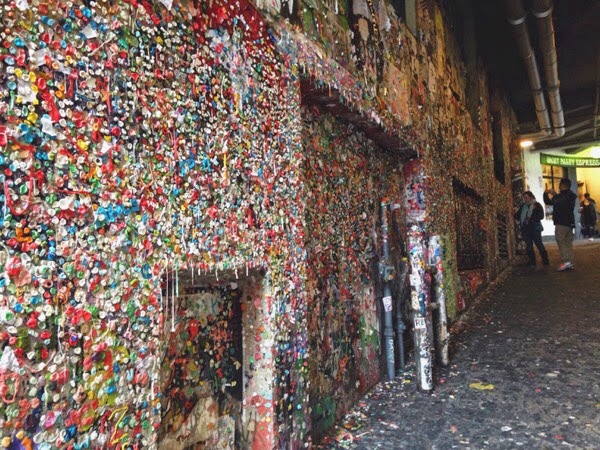 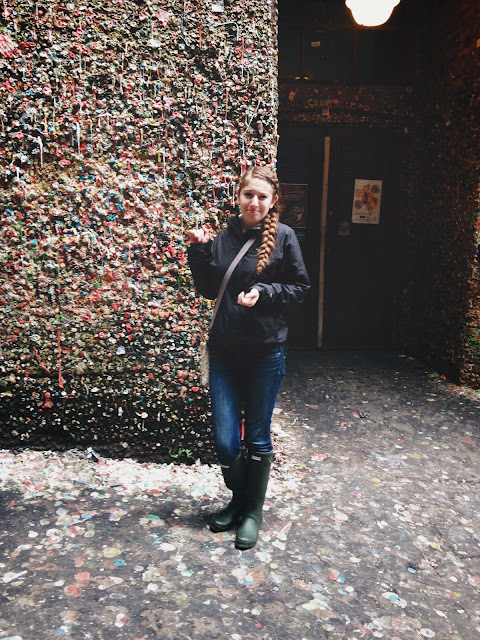 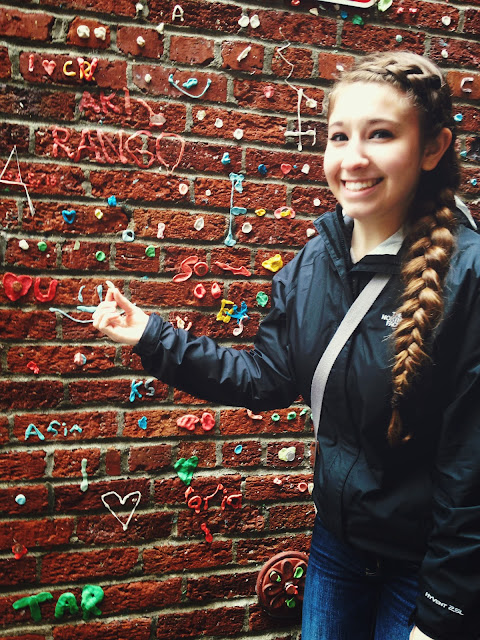 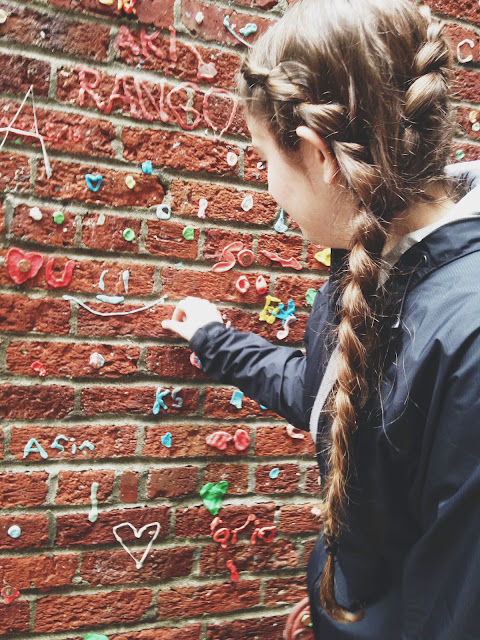 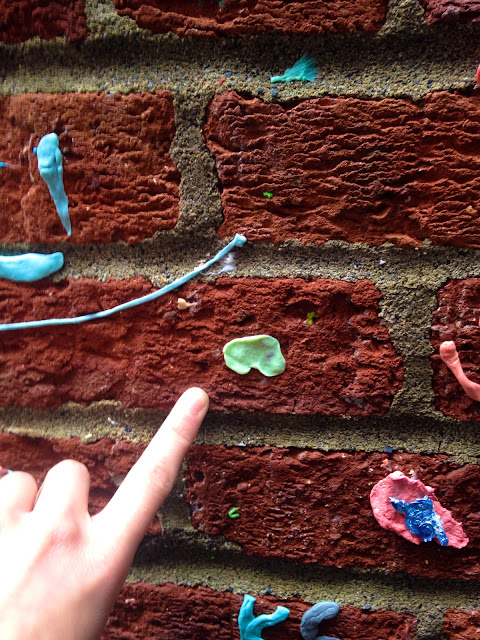 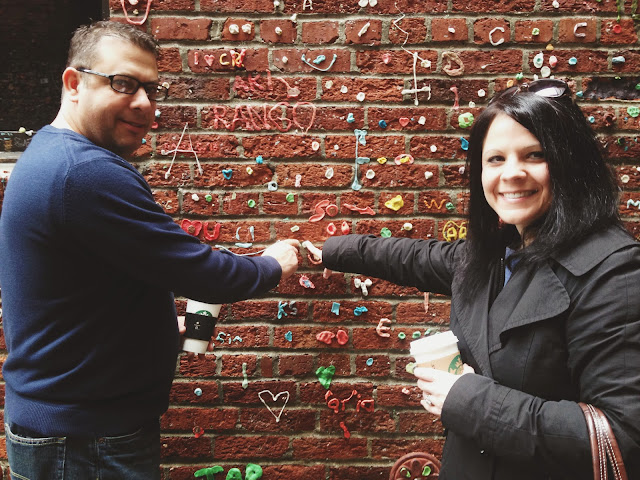 It was quite the place. All I saw were germs, a breeding ground for bacteria, diseases, but it is public art made by the public of Seattle, and tourists wanting to leave their mark on a great Seattle attraction made completely of gum and bricks.
We spent a fair amount of time looking for some place for us to eat. We walked a ways from Pike's Place, and we came across the Seattle Art Museum. I am in love with museums. I wanted to go to all of Seattle's museums, but sadly I don't have a thousand bucks to spend on museum passes, nor do I have the unlimited time. Some day though, I will come back to Seattle, and I will do a museum walk. 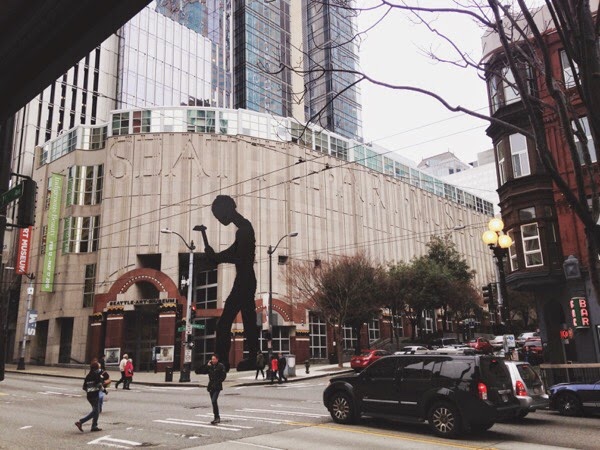 We ended up finding this little-hole-in-the-wall pizzeria, Italian Family Pizza. It is family, and locally owned, which usually means that their pizza is fantastic. When we went inside, we saw these huge pizzas, probably at least 2 feet of pie. Some of those pizzas were only a few dollars of $40. It was insane! We got two smalls, which is a normal large for us Papa Murphy folks, or Papa Johns folks out there. We could customize what we wanted on our pizza, and I thought that was perfect. The service was friendly, and the pizza was phenomenal. 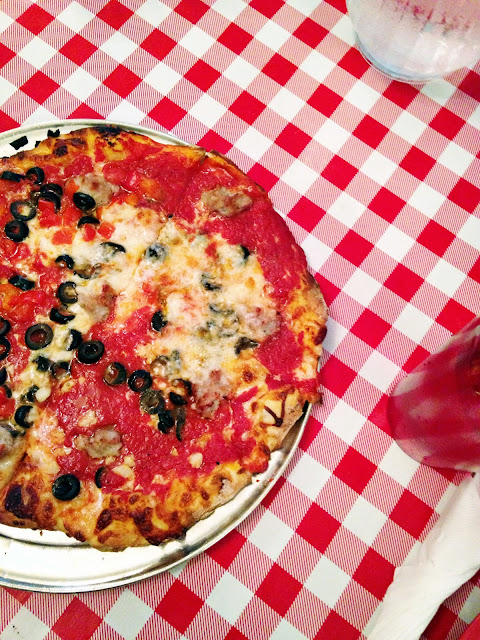 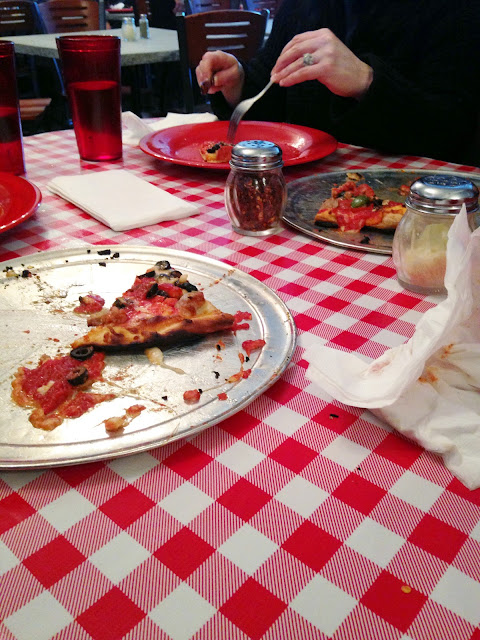 After we ate, we decided to start walking back to our car, and begin our trip home. One of the produce men at Pike's Market was telling us about some great doughnut places in Seattle. He told us about this doughnut shop called Top Pot. When we were walking back to our car, we came across Top Pot, and I had to stop by. I am, however a doughnut enthusiast. I was surprised that their selection was not large, but that is ok, because they make up for it with the tastiness of their doughnuts. It is dense, but airy and light. It wasn't greasy, and the glaze wasn't too thick. It wasn't too dry, it was perfectly moist. Plus, the doughnut was so cute, and fair priced. 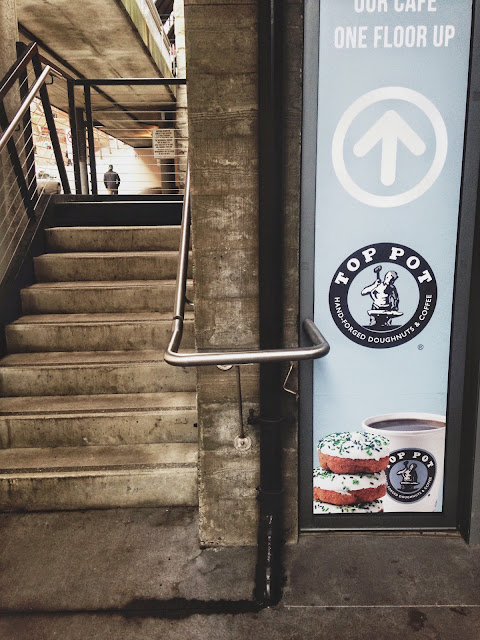 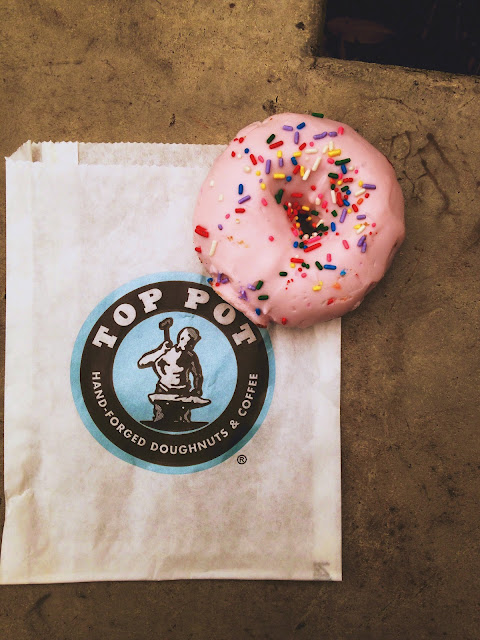 We found our car, not far from Top Pot at all, and we headed back to Portland. It was quite the busy weekend, but a fun one at that. This could very well be one of the last trips I take with my family while I still live with them. I am glad that I went and spent some much needed time with them. It was a blast, and I am so looking forward to my next trip to Seattle (whenever that will be). There is just so much to do and see.