I loved our extended Christmas! I knew it would be eventful, merry, and fun! Since my Aunt Shawna was busy on Christmas Eve, we decided to move our traditional Christmas Eve celebration to Saturday the 27th, yesterday! It worked out very well, even though there were some hiccups, but that is what makes it memorable.

I began the day with making homemade candy cane playdough for part of the girls' Christmas present. I like giving them activities to do during their Christmas break. It made a ton of playdough! So they are all set. We left a little after 1:00, and arrived there a little after 1:30. We saw all of the girls' Christmas presents from their other grandparents, and from Rob and Shawna. They received a load of fun, Frozen stuff. Raelyn received a baby Elsa doll that when you pressed a button, she sand "Let It Go", and so Raelyn would sing it. I am so amazed by that little girl, if you play that song, she knows all the words, and it is so cute to hear her sing it. After looking at their gifts, we decided to play some games. Isabelle and I started playing Connect Four, and she was saying that her hands were itchy. I thought her hands may have been dry, but a few minutes later, she started breaking out in hives. We were not sure exactly what could have caused this, but it became worrysome, so Shawna and I took her to Immediate Care. She was a brave girl, they had to give her a shot, and her hives cleared up within minutes. 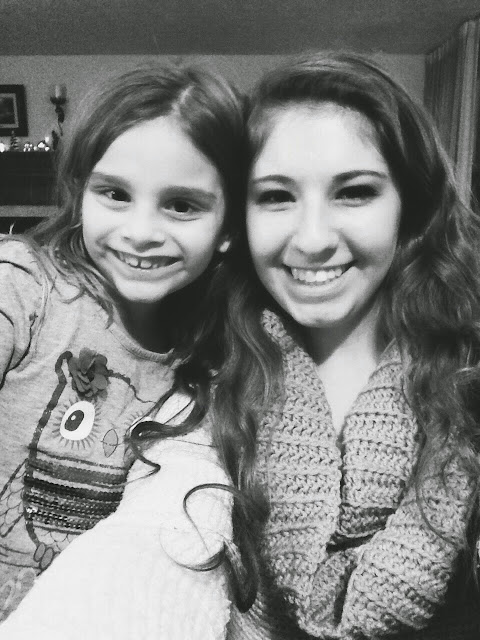 She was brave, and while her leg was hurting her because they had to give the shot to her in her leg, she was such a trooper. When we arrived home, our awesome family waited to eat dinner so we could eat with them. They are seriously the sweetest. We had a delicious turkey dinner, with stuffing, green bean casserole, delicious cannon ball sour dough bread stuffed with cheese and green onions; we had homemade cranberry sauce, and mashed potatoes, and family conversation. It was a lovely, yummy dinner. 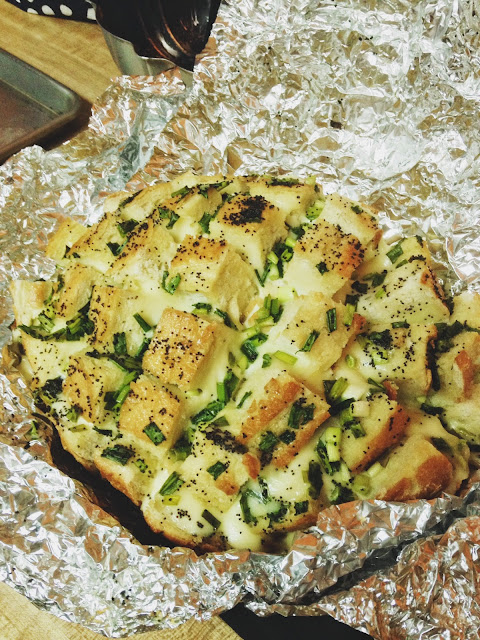 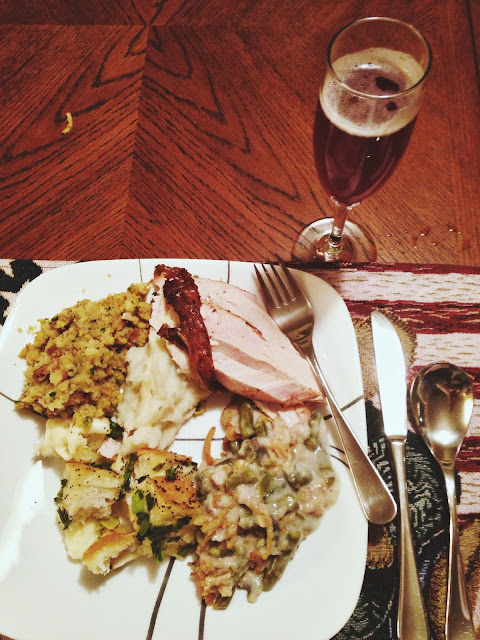 During dinner, Raelyn was wearing a beautiful, Frozen nightgown, and she spilled a bit of chocolate milk on it. It was so cute though, she started crying, and said she didn't want her nightgown to be put in the dishwasher ;). She is quite the cutie, and has a feisty personality.
After we cleaned up from dinner, we opened presents. The girls had so much fun seeing what they received, and playing with their new toys. Isabelle received this interesting robot dog that I think was the hit of the night. I received some pots and pans for when I have a place of my own, some essential oils, a hefty check, and some all natural peppermint and sage soap that smells delightful. 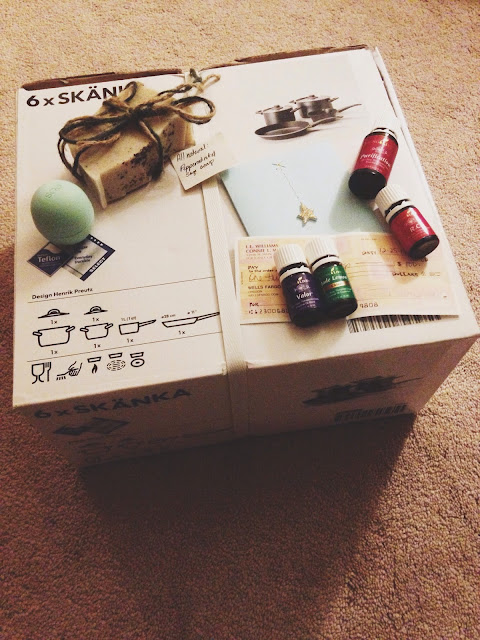 The girls played with their gifts for a while, then Isabelle said that she wanted to play with the playdough I made for them. I was so excited! We played with playdough while my mom, cousin, and aunt played Aggravation. A long time ago, my Great-Grandpa Kirby made a big Aggravation game board, and we all love playing it. Of course, Raelyn wanted to play with playdough shortly after they began playing Aggravation. The attention span of a three year old is not that long. She seemed to enjoy the playdough though, which is awesome! 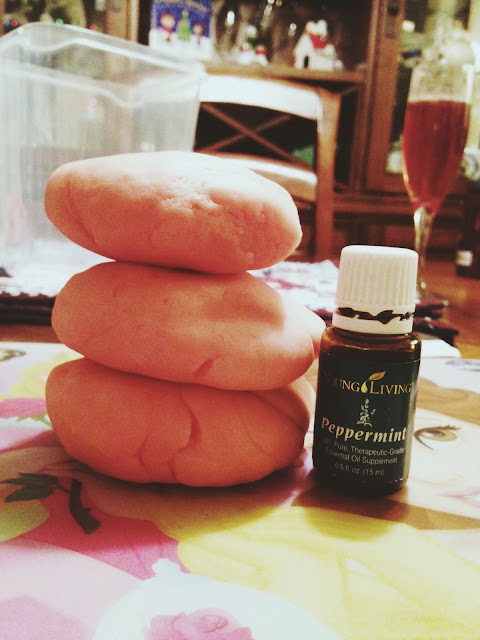 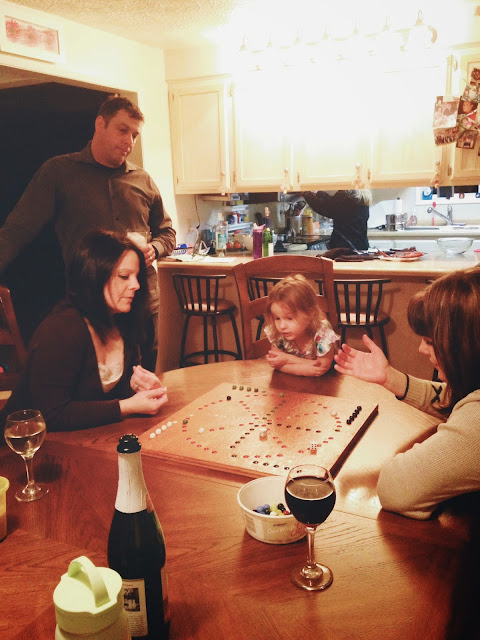 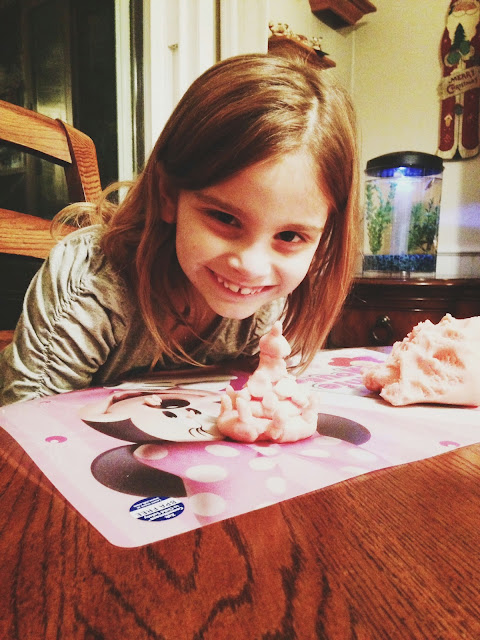 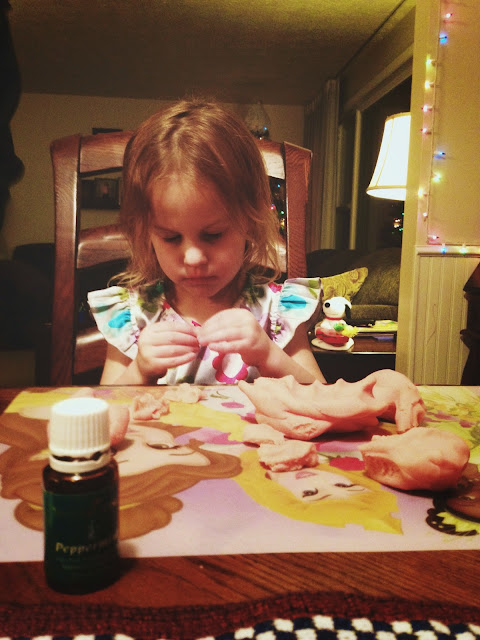 We cleaned up from Playdough, and we had dessert. I made Monkey Bread after opening presents, and we also my Grandma Williams's awesome Hershey Bar Pie. Dessert was a delicious combination of Monkey Bread, and Hershey Bar Pie, so yummy. 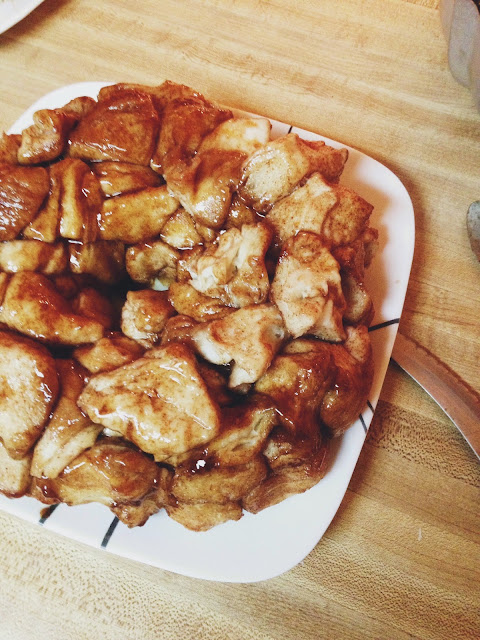 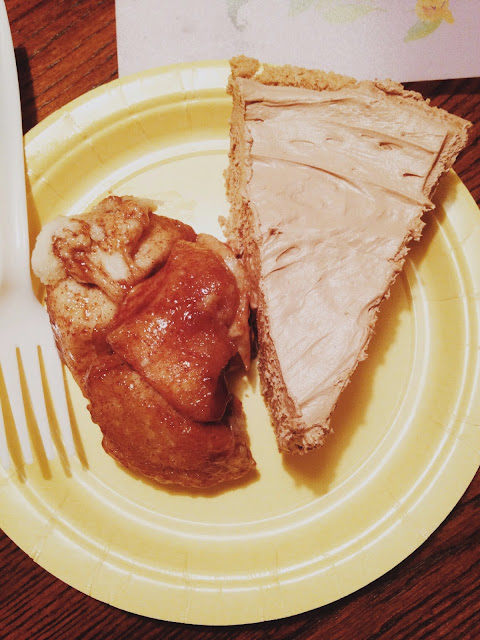 During dessert, my sister arrived from being at a party, and she introduced a really fun game to us. It is an app on your phone called Charades, and you hold it on your forehead, and there are many categories you can choose from, such as songs from the 80s, or Disney characters. The person holding it on their forehead has to guess what is on the screen. The people playing along can pick the "act it out" option, or can give word hints to help the person guess what is on the screen. It is a pretty fun game.
After a few rounds of that, I put on Frozen, because after all of the Frozen activity, I thought it would be appropriate to actually settle down and watch it.
It was such a fun, eventful evening. I love spending time with my family, and being with them. I am glad all is well now, and that we had a wonderful celebration. It was a day filled family, good company, and good food. ;)