I am home now, and the last couple of days have been so, so busy! I am unpacked and getting back to regular life. Thursday was the last full day in Sunriver. It was the day that my Aubt, Uncle, youngest cousin, and my sister all left for home. Meanwhile, my grandparents, Isabelle, and I all stayed behind to stay for another day. On Thursday, we went on two bike rides, one with everyone, and then when the others left, my grandparents, Isabelle, and I went on a long bike ride! Our first stop was at the Sunriver Lodge where they have beautiful art on the walls, a high-faluty gift shop, and these awesome, giant stuffed animal bears for decoration. We used them as photo opportunities. 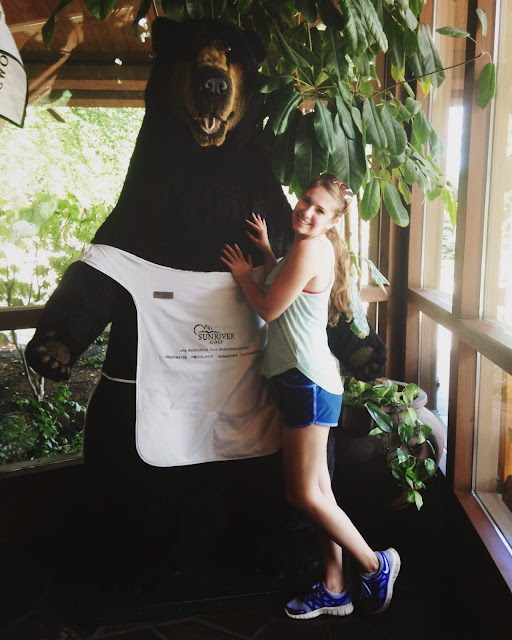 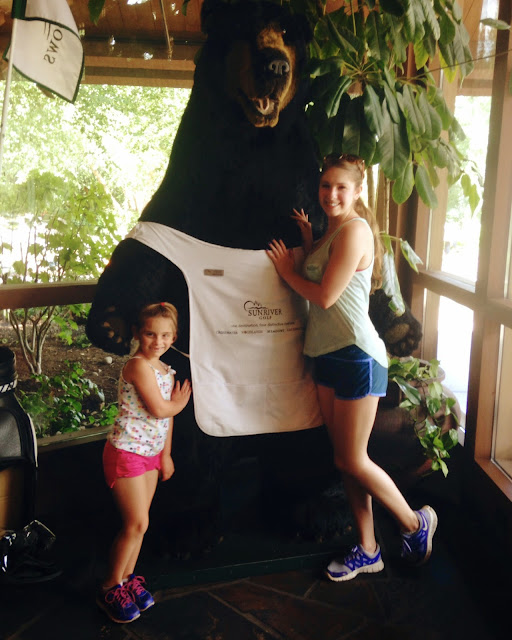 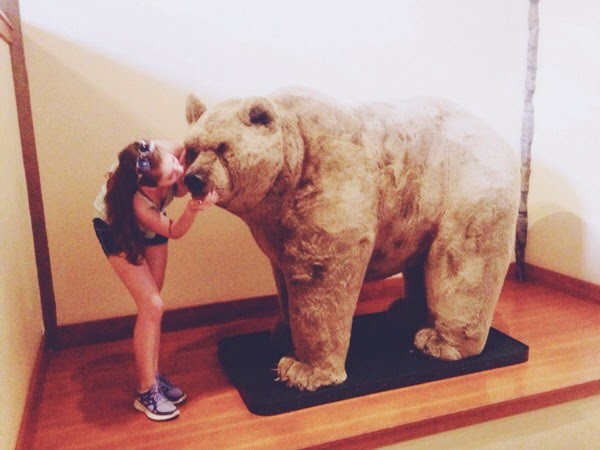 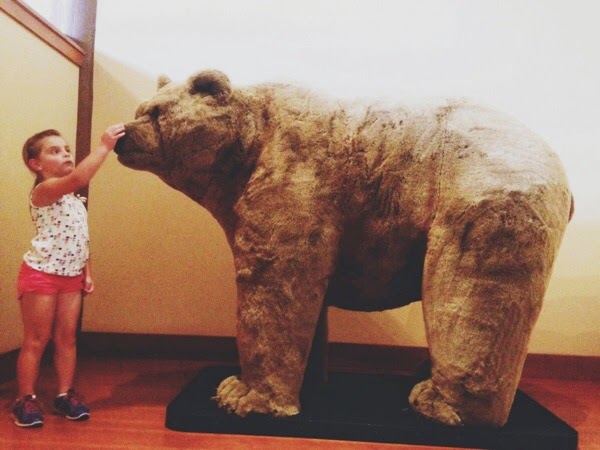 After the lodge, we went down the pathway to the Grand Hall. The Grand Hall was built for Camp Abbott in 1943. There were plaques and posters that had pictures of the Grand Hall being built. It looks like a beautiful place to hold a wedding, or a fancy party, even a prom or a dance. It is this gorgeous place. I could see my sister getting married in there. It isn't quite my style. I would rather get married outside, but nonetheless, this Grand Hall was gorgeous! 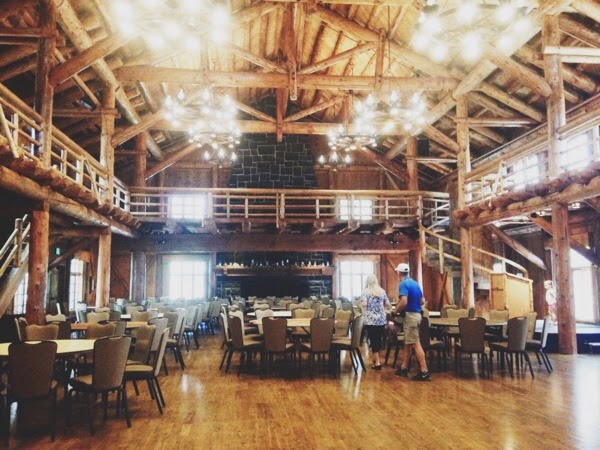 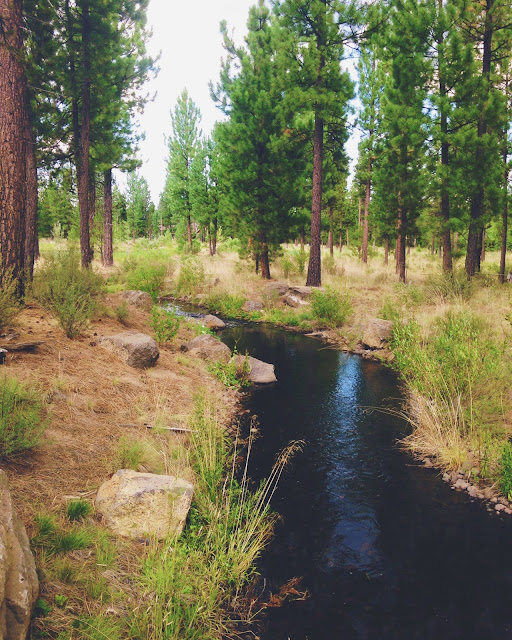 While we were there, we were caught in a thunder and rain storm. These rain drops were HUGE! Of course, we got soaked. Then, it started to hail. We went under some trees to try and stay somewhat dry until it let up a bit. We ended up having to go under the eve of some home there in Caldera Springs when it started pelting hail. At first, I thought the hail was huge compared to timy hail we get in Portland. The hail was shaped like rain drops or diamonds. They were interesting. Then the hail got bigger! They became the size of golf balls! Isabelle is holding the piece of hail that is the size of a golf ball. In this creek picture, you can see the rain drops pouring into the creek! 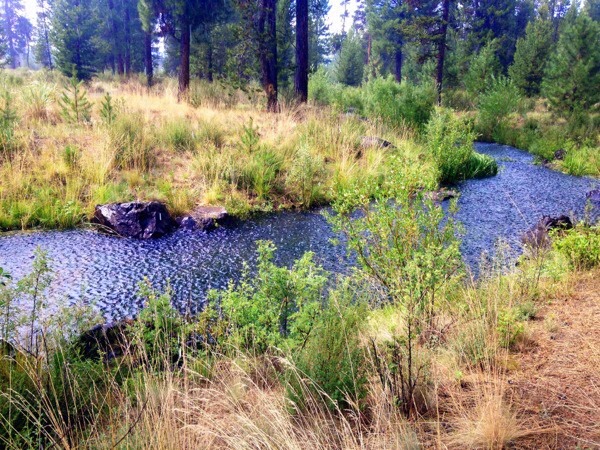 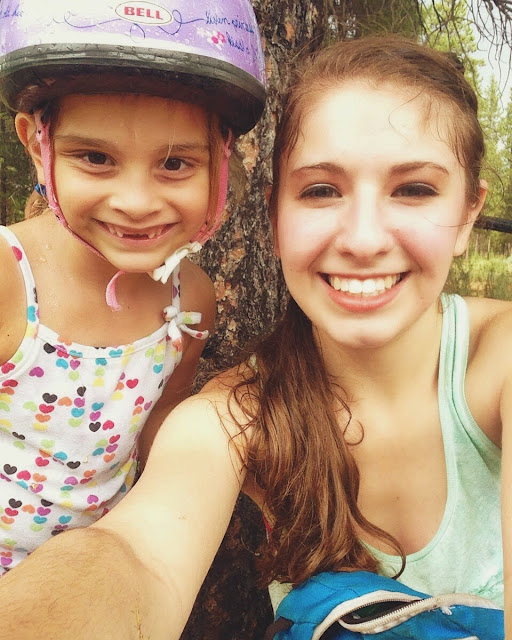 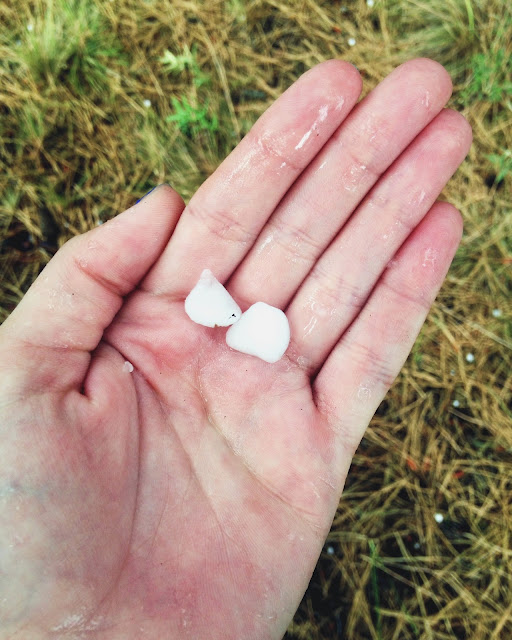 You can see the rain and hail slightly behind Isabelle. It was a big mess. 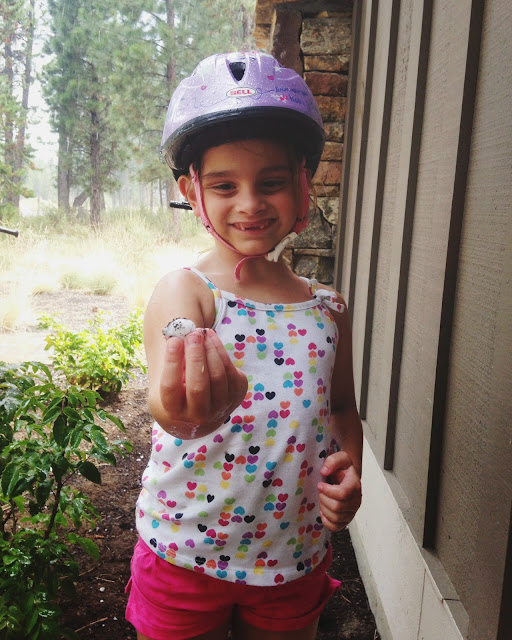 The rain and hail finally stopped, so we left Caldera Springs and made our way back to Sunriver. We went to the Village and grabbed a little bike-riding treat. Isabelle got a snow-cone, and my grandparents and I each got a delicious ice cream from Goody's. I got two scoops, one scoop of coffee bean, and one scoop of brownie batter ice cream. Oh it was such a great combination! 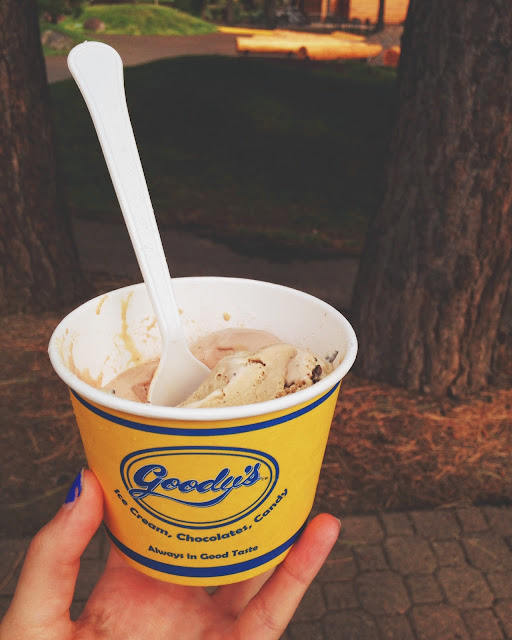 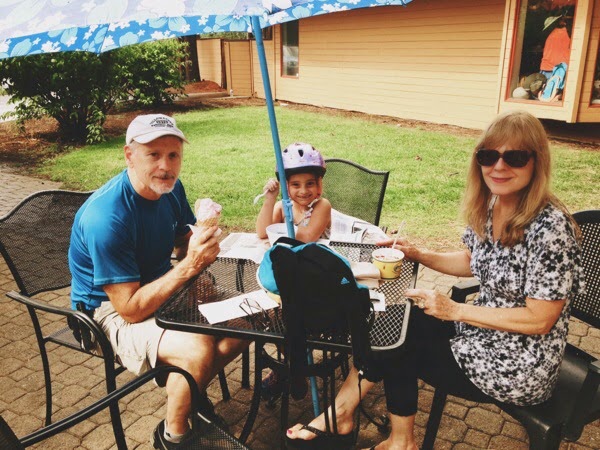 After our little stop at the Village, we got back on our bikes and took the long way home. We ran into frogs on the trail, and had a great view of Mt. Bachelor. As we neared home, we came so close to this family of deer. The babies were skittish, but the mama deer was right by the trail. We were so. Close to her! 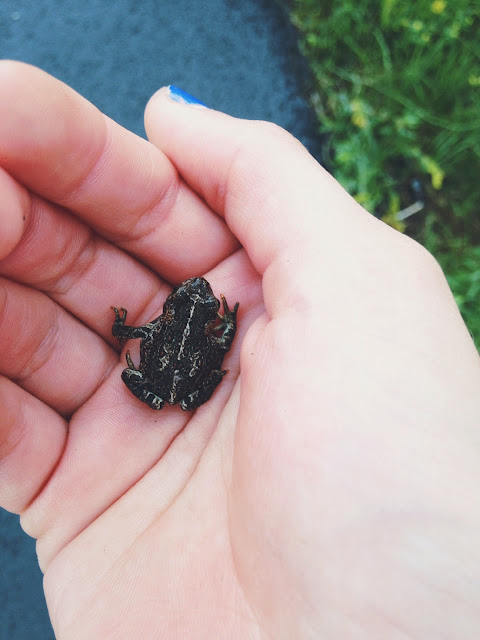 Don't worry, the frog is alive. 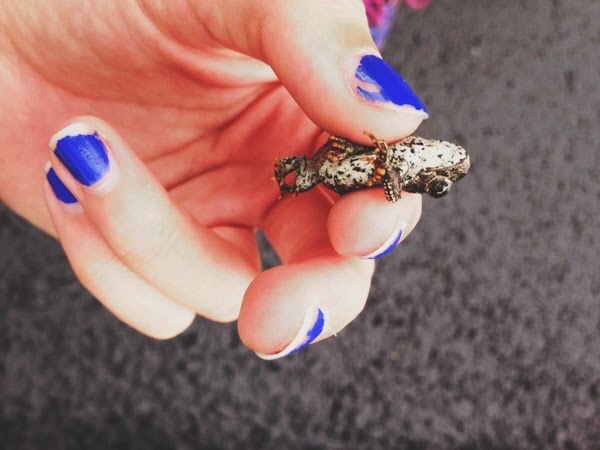 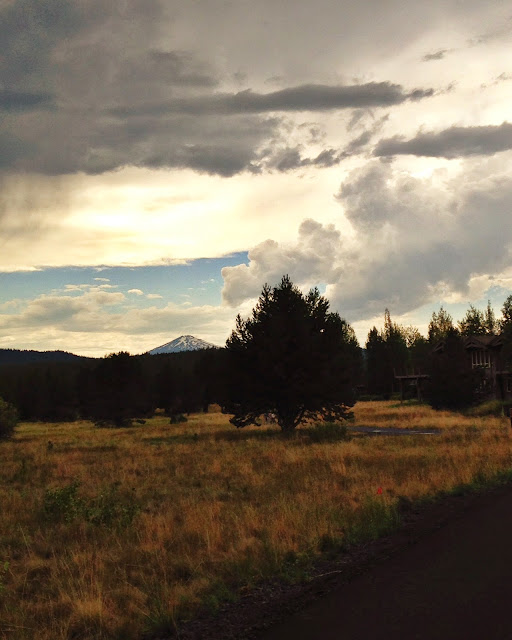 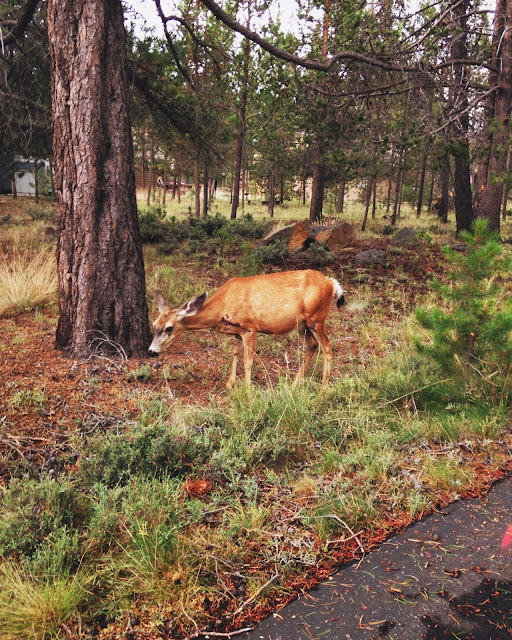 We arrived home, and got ready to go again. We were thinking about going to the observatory, but due to the rain storm and the clouds, the observatory was kind of out of the question. We decided to go eat in the Village at the Village Bar & Grill. We ate there last time we were in Sunriver, and they had good food. This time, there was about a 45 minute wait. We did some shopping while we were waiting, and they also had some live music by the Pavillion. The guy who was singing was decent, and the guests of Sunriver, who were in the village were all dancing and acting crazy. Isabelle wanted to dance, at first, she said "no" to dancing with Grandpa, Isabelle wanted to dance with a little boy, but then she finally gave into dancing with Grandpa. 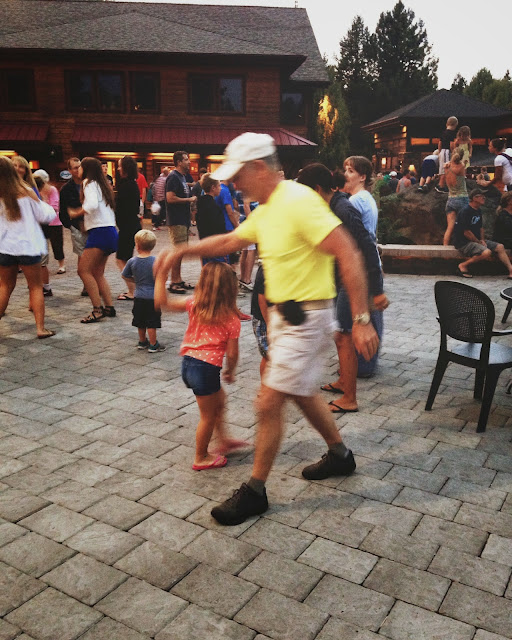 Finally, our table was ready and we were seated. I ordered a chicken wrap with a garlic herbed tortilla. It was delicious, and the fries were wonderful! 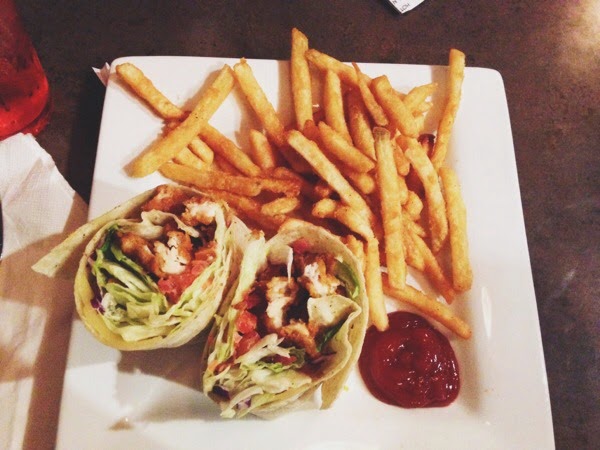 After dinner, we went to walk around the Lodge a bit. The Lodge is so pretty at night with the little lights lighting the path. It was pretty. When we got home, I showered and got ready to go for the next day. I wanted to take care of as much packing up the night before we left instead of having to do it all yesterday morning before we left. During the night, lightning was flashing, and lighting up the sky. I had my window open, and the blinds up so I could see it. There was no thunder with the lightning, which was sort of weird. It was a unique ending to a unique day, and a great end to the trip.
Labels: family sunriver Vacation