The first thing we did was get up and go to the Village. I did my lipstick post, got ready, and we headed out. I bought some Habenero Jelly from the Oregon Store, and a candle from The Lucky Daisy store here in Sunriver. We also went to Hot Lava Bakery and I got a coffee and sun dried tomato and basil bagel. On our way out of the village, we met this huge dog! He was a sweetheart though. Isabelle and Raelyn were quite intrigued with the gentle giant. 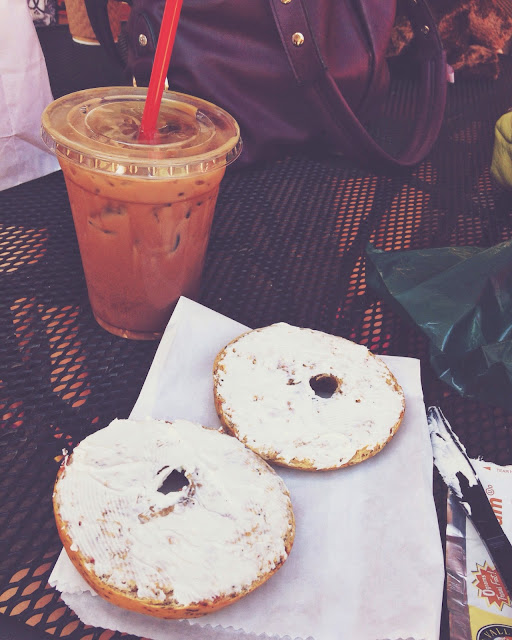 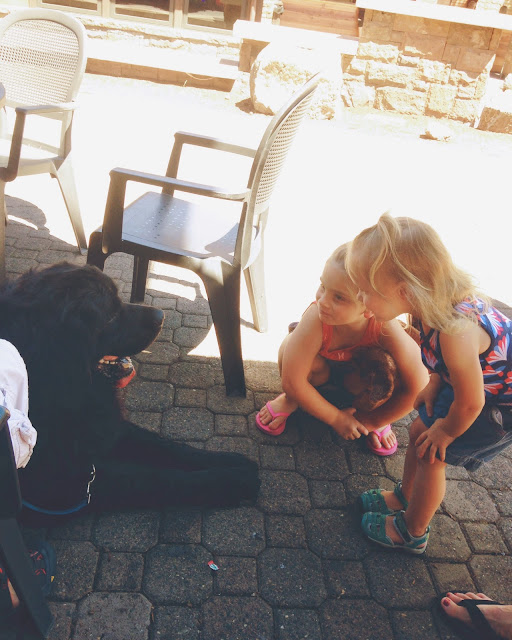 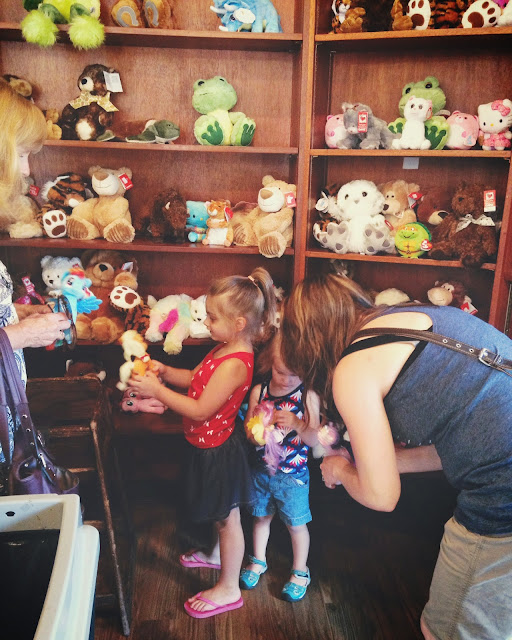 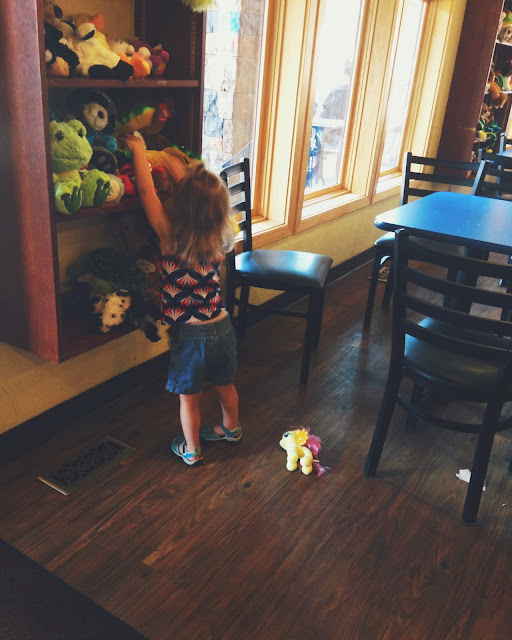 After the Village, we went to the Fort Rock Park here in Sunriver. At the park, they have this spinning contraption that looks like a tree. The little girls went on the spinning thing, and I thought it would be fun. You can see me holding on for dear life. I got a bad case of motion sickness from that darn spinning thing. I grabbed Raelyn because she is a tiny thing, and I was scared that she was going to slide through the rope squares on the tree. Never again! 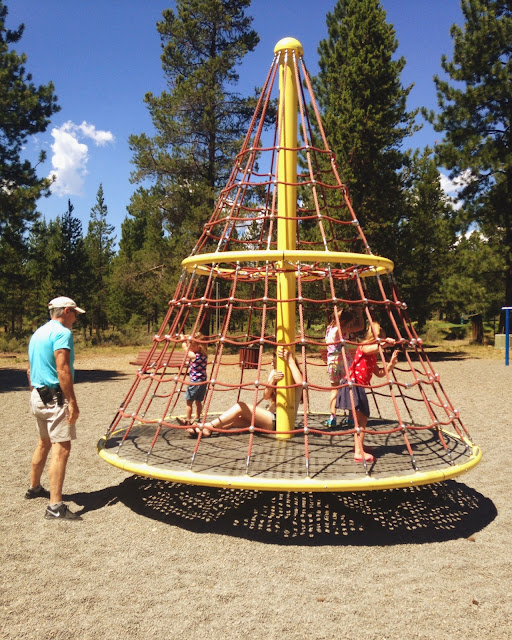 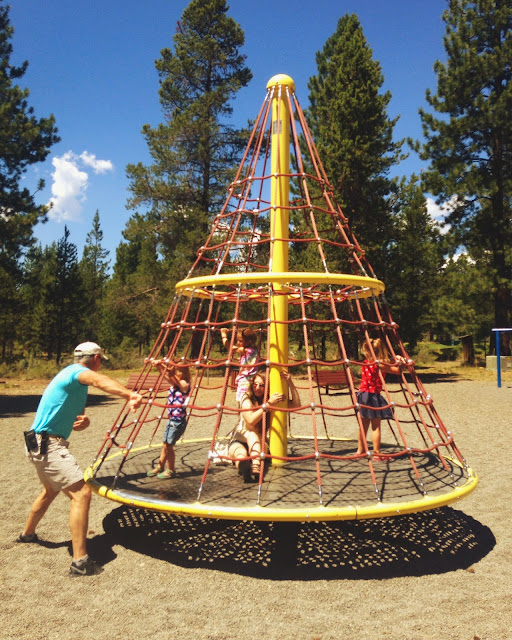 But it ended up being fun, and the little girls had fun, and my motion sickness eventually went away. 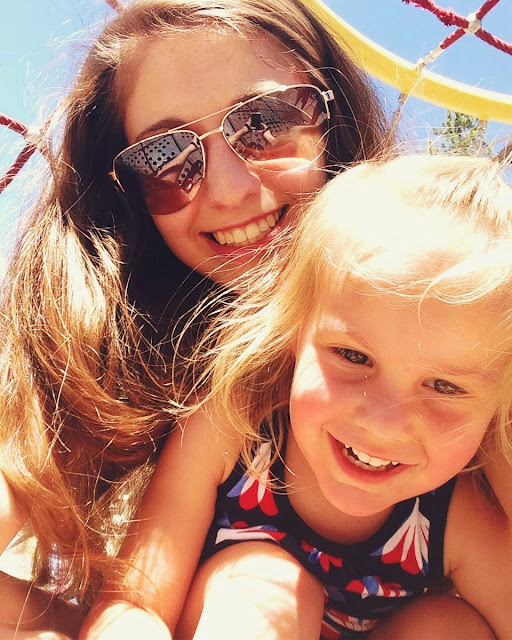 When we got back from the park, my Grandparents and I went on a bike ride. It was a nice bike ride, and it started storming, and raining. I saw some people I knew walking on the trail, so I said "Hi". When we neared home, my Grandparents went to the North Store and I decided to go off on my own for a bit. It was fun going on a little bike ride by myself, enjoying nature, and going in a different direction than where we usually go. 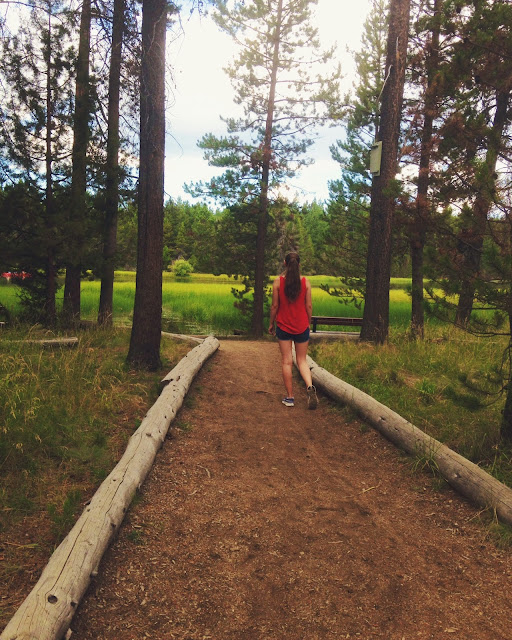 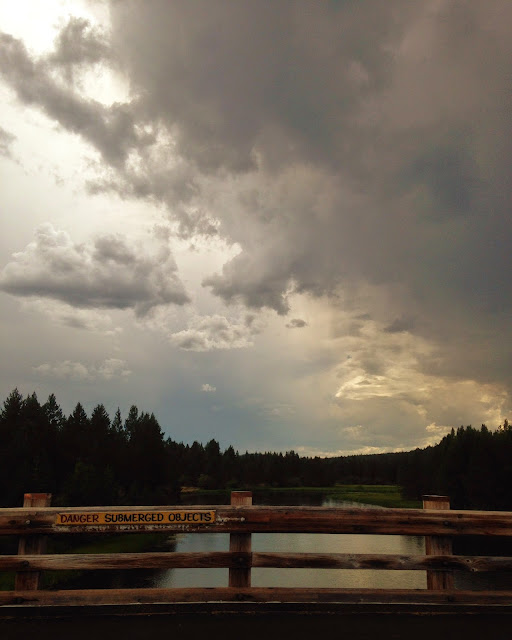 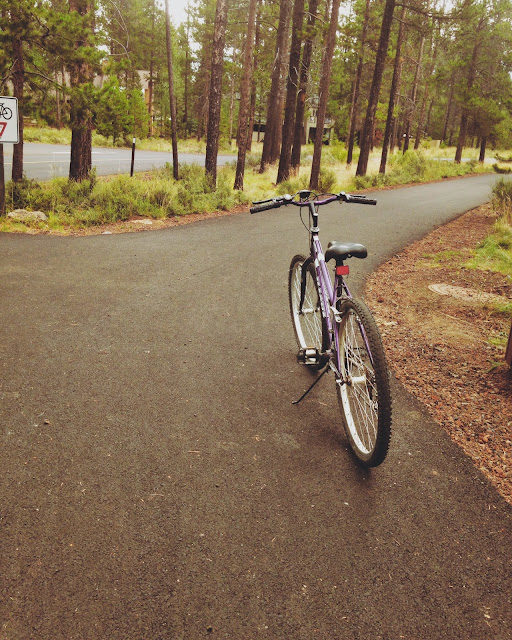 It was a going, going, going kind of day, because after the bike ride, we all went to the Mavericks of Sunriver, except Brittney. She didn't do much with us today. But oh boy, the Mavericks of Sunriver was such a fun, and great pool experience! I loved it! I hope we can make it back just once more before we go!
Isabelle also swam in the deep end of the pool without flotation support! I was so proud of her! It is a great place to swim. It is not overly crowded, which is really nice. 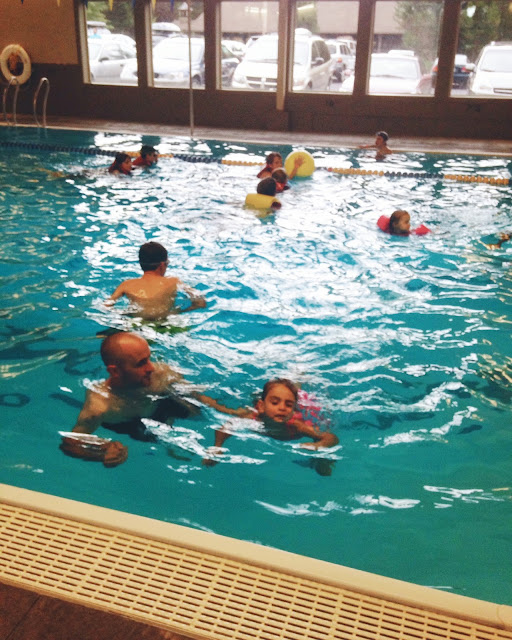 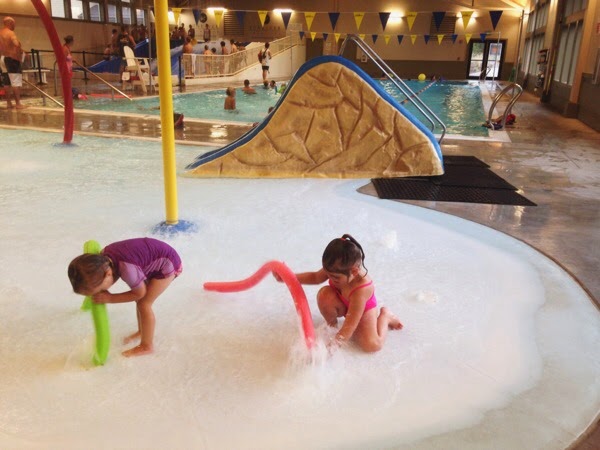 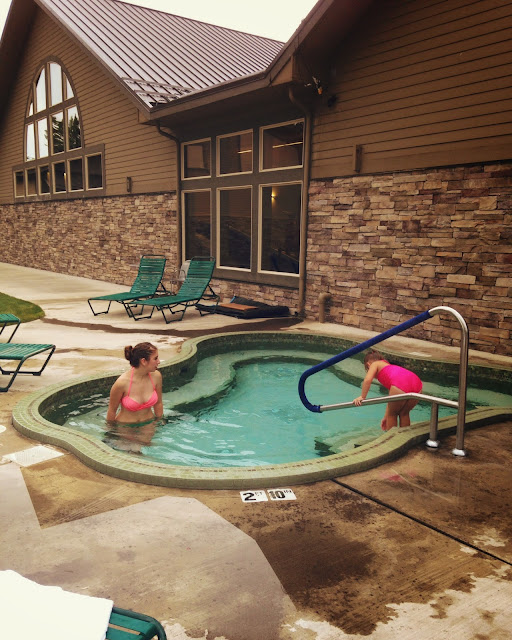 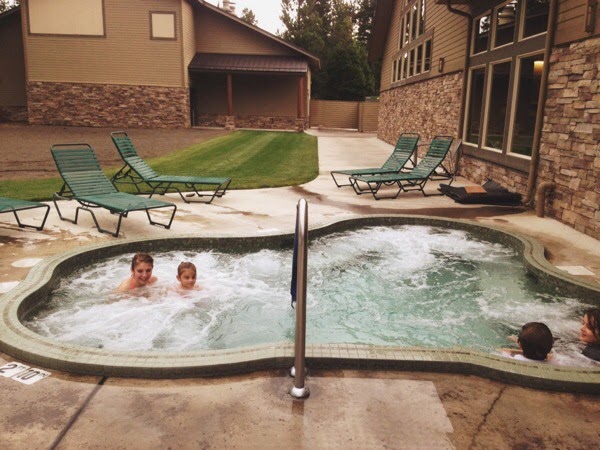 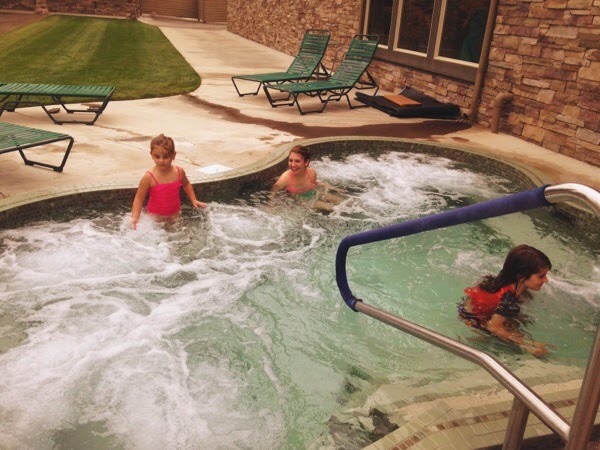 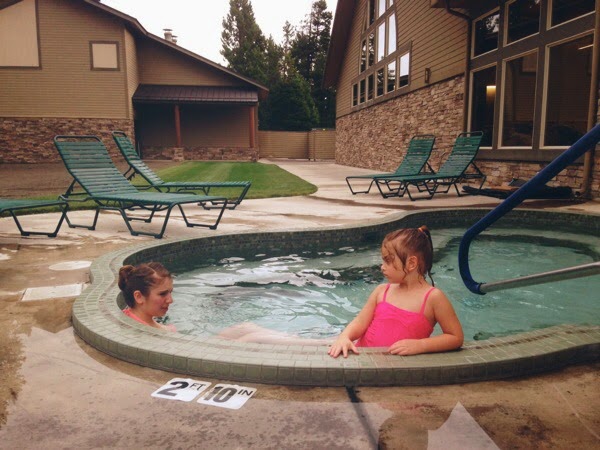 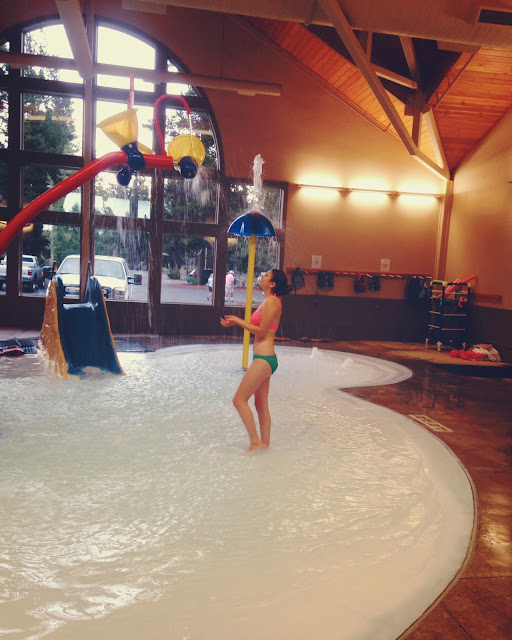 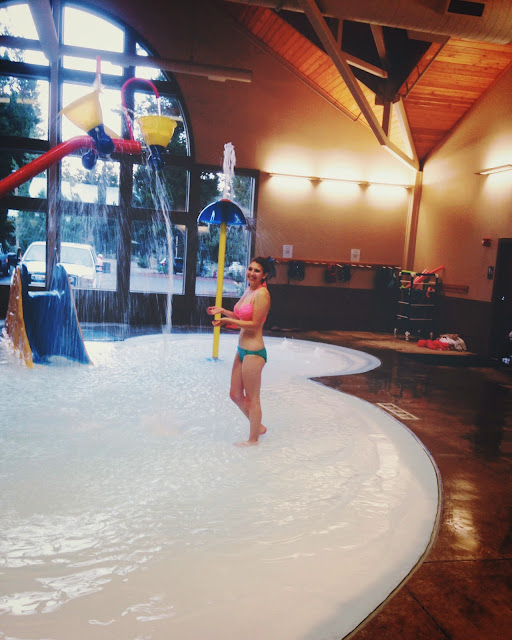 The Mavericks also has a smoothie bar, and I got a smoothie called the Sweet Tart. It has blueberries, orange juice, strawberries, frozen yogurt, and something else, but I can't remember. It was absolutely delicious though! 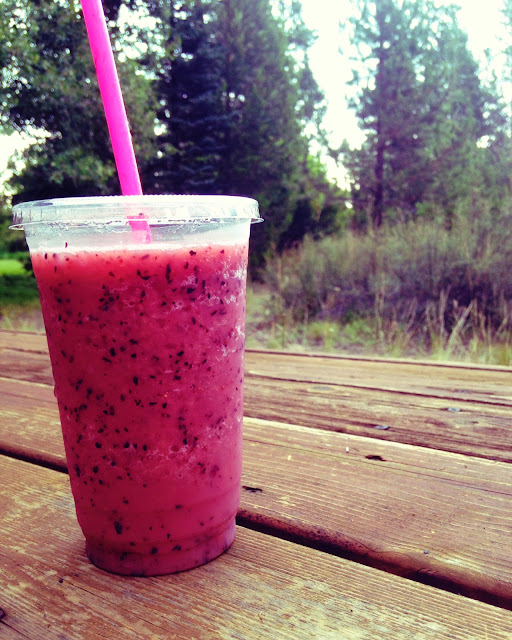 Another great, busy day in Sunriver! Only two more days left here. I am going to be sad to leave, but it will be nice to see my folks again.
Labels: family sunriver Vacation
Location: Deschutes National Forest Bend