What a fun evening! It is certainly a night to remember. After the girls got ready, we headed down the street to Kaylee's Grandma's house where the pictures were going to be taken. I am so glad that my parents changed around their schedule so that they could come and take pictures with us. It was so much fun!

We took a group picture, we took an all girls picture, Kaylee and I took pictures by ourselves, and I had pictures taken of me with my parents. I also had some pictures taken of just me alone. Our heels kept sinking into the lawn, and we would pick up the bottoms of our dresses and hold them in between pictures. It was a good time. 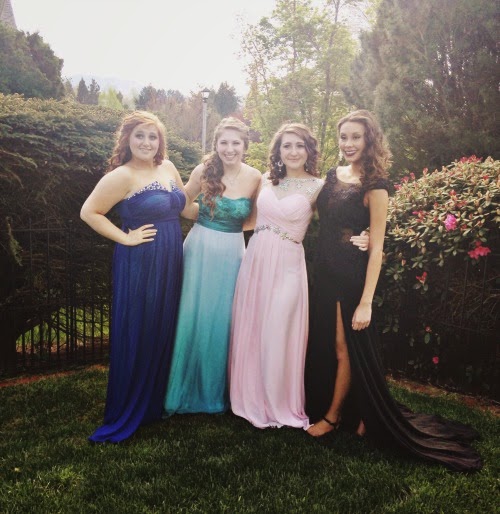 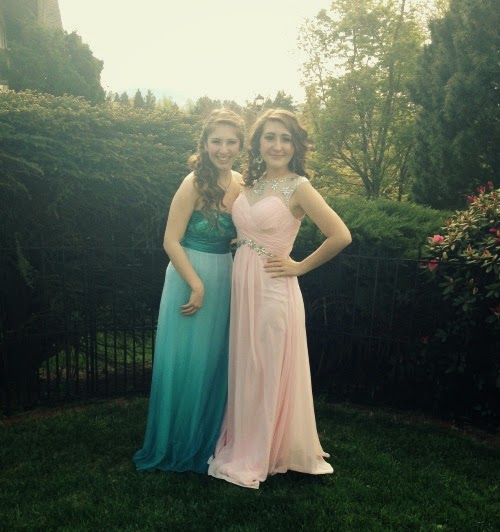 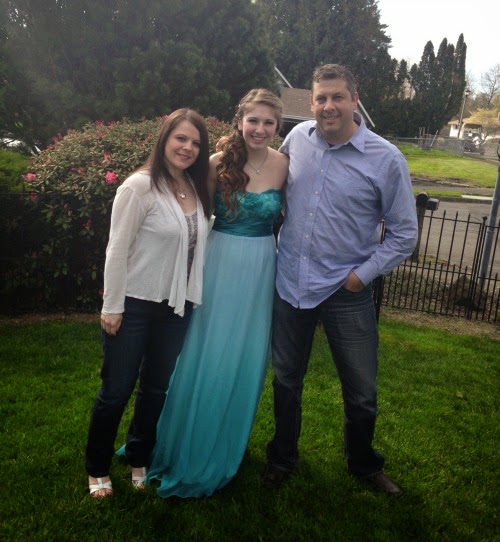 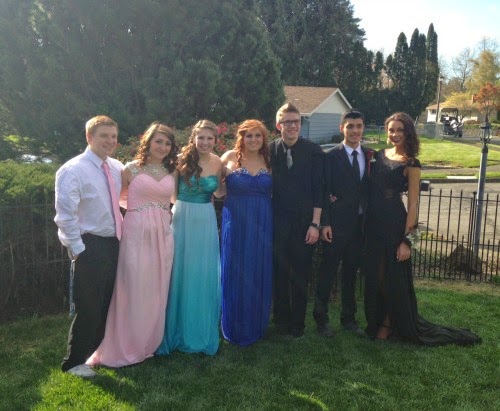 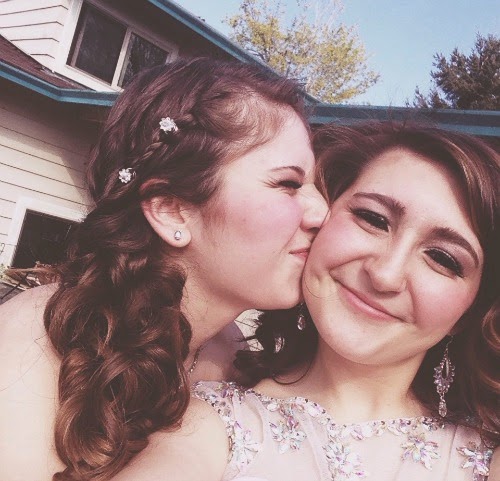 We piled into Kaylee's parent's Suburban, and headed to Downtown Portland. We were going to go eat at Pastinis and walk down to the waterfront and take more pictures. So we parked the car, and started walking to the waterfront. Walking blocks and blocks in our heels did not sound appealing, so we took them off. Being a germ-a-phobe, I was concerned that I was going to step on something unpleasant, but I never did. It was quite an adventure. 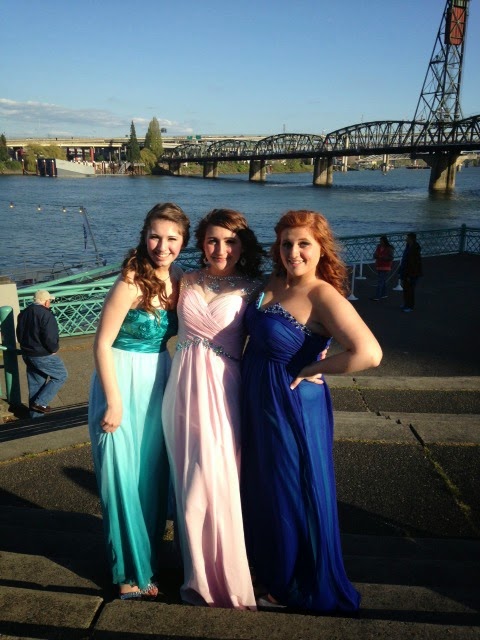 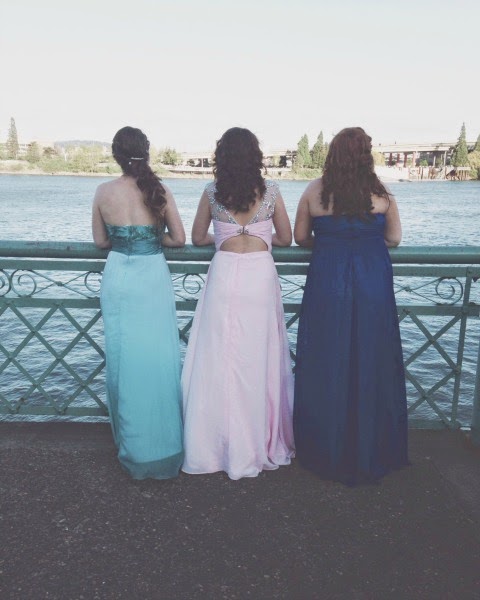 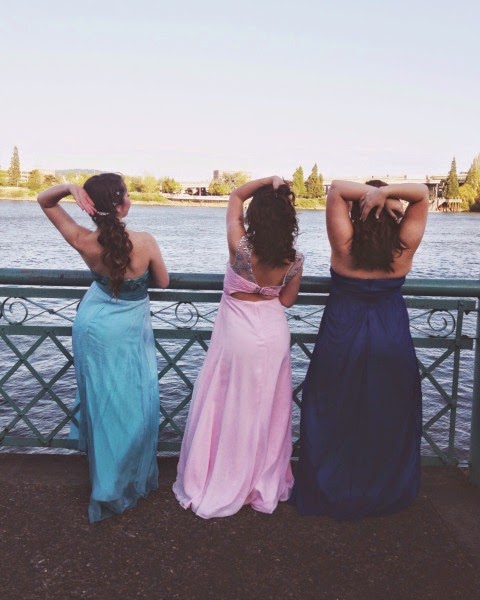 We walked back up, and we finally arrived at Pastinis, and there was a line! I was so hungry at this point, and I was about to faint, and become cranky. We saw another prom party from a different school, and they said that there was an hour and a half wait. We did not want to wait that long, so we crossed the street and went into Starbucks for water and to figure out where we wanted to go. Kaylee's boyfriend suggested that we go to Rock Bottom, a burger and brewery place, and that it was not too far from where we were at, so we decided to walk there, and off go the heels again. We walked a few blocks, attracting a lot of attention from us wearing our colorful prom dresses, and traipsing around town.

We arrived at Rock Bottom, so hungry at this point, and we asked how long it would it would be for a table, and they said that they were not serving anymore food because they had a gas leak in the kitchen, but they recommended a place, Mama Mia's, an Italian place just down the street. We left Rock Bottom, and began walking to Mama Mia's, and we saw a big group of people outside. We were worried that it was a line, but it was just a group of people standing outside once we got closer. We went inside Mama Mia's, and asked how long it would be for a table, "Hour and a half" they said. We groaned publicly, and we left. Kaylee said that at this point, she was fine with a taco from the taco trucks, which were in the lot next door to Mama Mia's. I was not too fond of the idea, eating standing up in my prom dress, and the possibility of spilling something on my dress. Prom dinner out of a taco truck, lovely!

We walked around the lot, and I spotted a place called Mother's Bistro. I made the suggestion that we should go check it out, and we walked around the corner and entered the restaurant. We asked how long it would be until we would get a table for seven, and they said it would be 10 minutes. FINALLY! So we sat and waited, and it was actually only about seven minutes. Perfect! We were given a window seat, and the decor in there was so cute, and vintage-y. Their chandeliers were gorgeous. 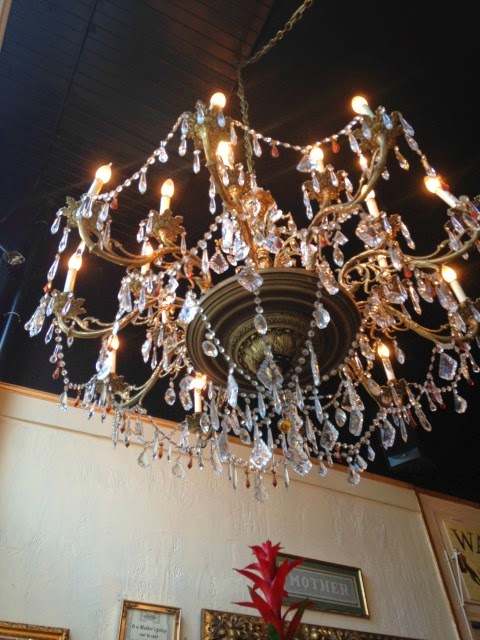 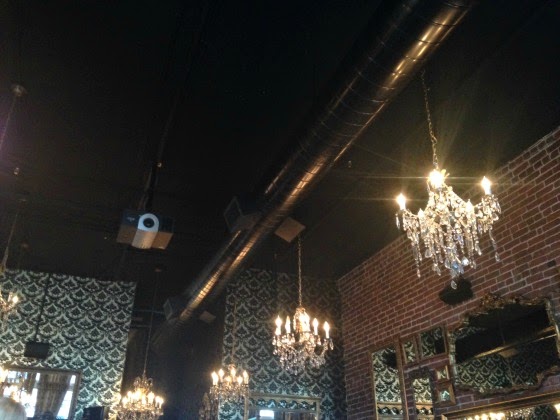 Most of us ordered their special Macaroni and Cheese, it had a special cheese sauce and sour cream, with crispy bacon, and green onions. It was so delicious! 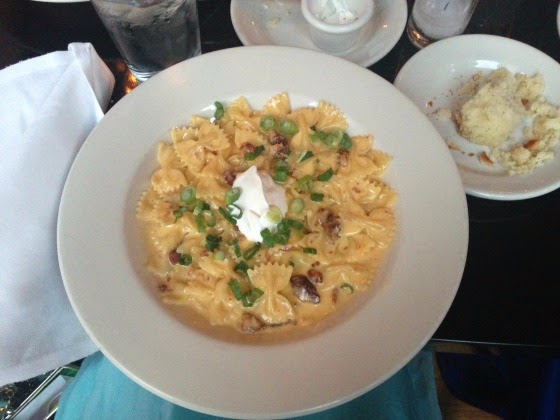 When we were done eating, Kaylee and her boyfriend went with another guy from our party who had their car, and he drove Kaylee and her boyfriend to where the Suburban was. Meanwhile, I stayed behind at Mother's Bistro with The rest of our party and waited for Kaylee and her boyfriend to come back.
When they came back, we headed straight to the Left Bank Annex, where prom was being held. We parked in the parking garage, and we grabbed our tickets, and took off our shoes to walk around the corner to the Left Bank Annex.
We saw some of our teachers and some other friends, and we saw a table that held all these pretty prom heels, so of course the girls took off their shoes and left them at the table, and we headed upstairs to where prom was.
Oh my, they decorated it beautifully. They had lovely drapes with purple lights shining on them, and draped lights, they had a dance area which was pretty big, and a dining area where you could snack on cookies and watch the pictures slide by on the TV. They had everybody's senior pictures slide by, I spotted mine at least once, and they had other pictures from throughout the year. They took pictures off the student's Facebook pages from their senior year, and only from their senior year, and used them on the second set of TV screens. It was fun to see all of the senior pictures, and to see pictures from throughout the year.

We met up with Melissa and her best friend, which she brought as her date and we spent most of the time on the dance floor. I did not want to leave the dance floor! It was a lot of fun! I saw some friends that I have known for a long time, and some friends that I have lost contact with, it was absolutely lovely.
I loved seeing my friends all dolled up, and in their beautiful dresses, it was a wonderful time. I really wish I captured better pictures of the room, because it really was decorated beautifully. 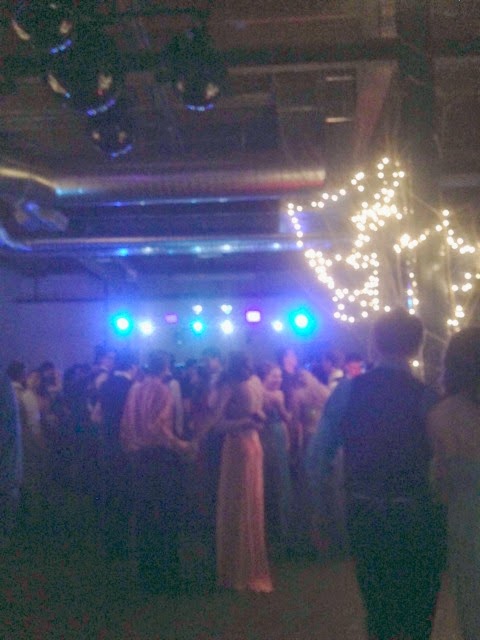 We kept dancing, and it was so much fun. Good song, after good song came on, and we were having a hard time leaving because we were all having such a good time. We finally decided to leave after just one more song, and that seemed perfect. We went back downstairs and grabbed our shoes, and headed out, saying good bye to our teachers, and the rest of our friends, and our now complete party were off to go get dessert.

My parents and my mom's cousin told me about this dessert place called Rimsky-Korsakoffee house, it is a cute, quirky Portland place, and they have amazing desserts. I suggested it to my group last week, and they liked that idea, so we decided to go there after prom for dessert. This place used to be a house, and there are tables where the living room used to be, and tables in the actual dining room. It is a perfect little place. 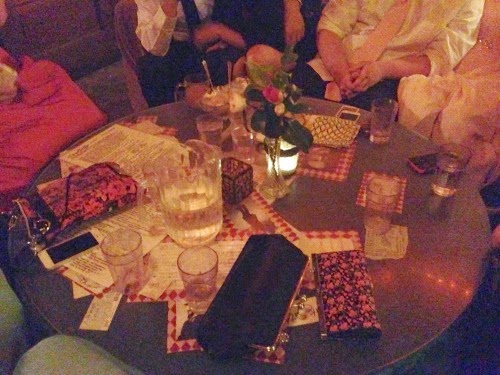 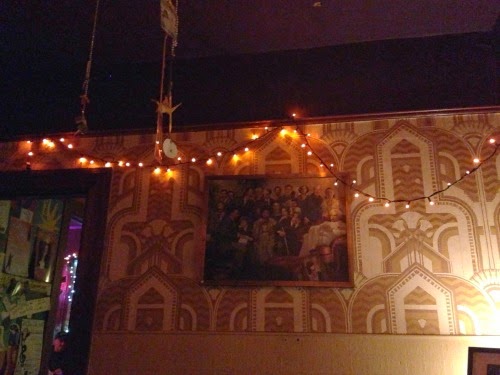 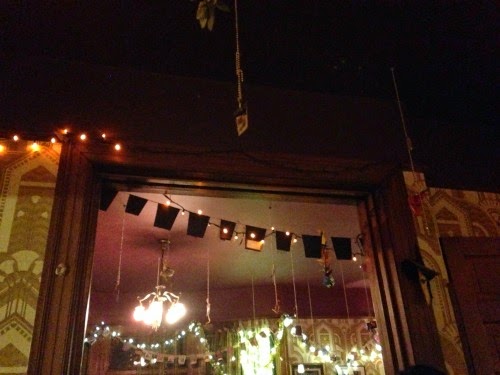 We sat down in the middle of the dining room, there was a couch in there, and we put chairs around the little "coffee" table in the center of the room. We all sat around and ordered our desserts. I ordered a mocha fudge cake, Melissa and Kenzie ordered raspberry cheesecake, Jordyn and her date ordered a banana split to share, Kaylee and her boyfriend did not really want anything, and Jaclynn ordered an ice cream.

Before our desserts arrived, I had to use the restroom. We heard that the restroom here was a little quirky, and that there were plastic hands in the toilet. I knew that would be sort of awkward. Jaclynn wanted to see the bathroom, so we went together. Inside the bathroom, there were these feet hanging from the ceiling, and the whole bathroom was painted blue like you were under water. There was also a life sized doll in a canoe, and he had his hand up and was showing a peace sign. That was weird. I checked the toilet, and there were no hands in the toilet, but there were hands holding the toilet paper. As I was closing the door to use the restroom, I heard a mechanical sounding voice behind me and I flung open the door, "Jaclynn! It talked! It's talking to me! I cannot pee here!" She asked me what it said, and I didn't remember, but I knew it talked it to me! So she came in, and turned around and of course it did not talk then, but it was so much better having someone else in there with me besides the creepy doll in the boat. I wanted to get out of the bathroom as soon as possible, so I finished up, and we left and ran back downstairs. We told our party about the creepy bathroom, and then our desserts arrived. My dessert was amazing! It was a rich, fudgy cake, with whip cream and mocha syrup. Oh my goodness, it was definitely a winner. 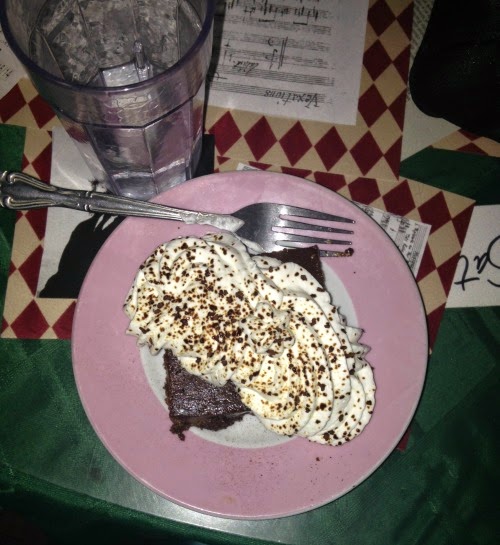 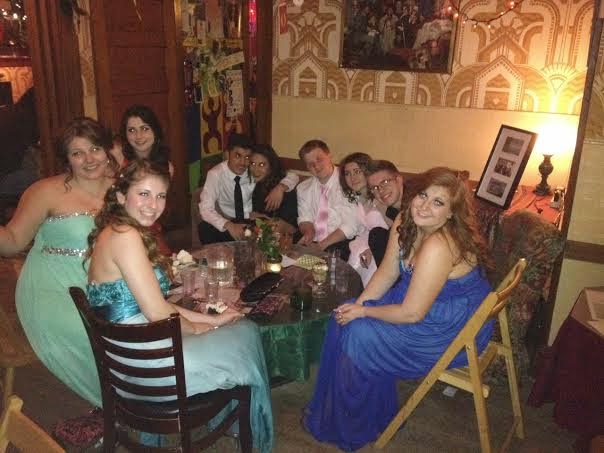 By the time we were ready to pay our bill, the napkin has made it's way over to where Jaclynn was sitting. We had not moved the napkin at all, and it had traveled half way around the table, proof that the table turned on it's own.
The evening was coming to an end, and we gathered back into the Suburban after we said our good byes to the people who drove separately. I was dropped off at home, and I quickly went to bed after taking off my eye lashes, and taking town my hair, and going for a quick shower.

Last night was a night to remember. I am so glad that I ended up going to my senior prom. I really would have regretted it. It was an adventure, and I am glad that I spent my senior prom with some really great people. 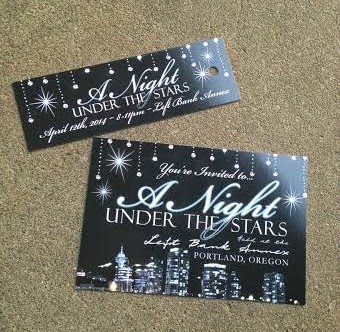