A lovely way to end a week, and spend a weekend is to add snow. Yes! Finally a snow day in the Portland-Metro area! We were told it would only snow on Friday. I don't trust the weathermen, but I guess they were right about something. When I heard it was going to snow on Friday, I thought there would only be "flakage", and not a major blizzard.
Yesterday, my fitness teacher notified the class that CAL classes were cancelled. Oh, I was so thrilled! No CAL classes, no English! As I was in French, my teacher notified the class that my high school would be closing at 12:40. I would have to wait for my sister to get out of school because I get out much earlier due to my enrollment at CAL. There was nothing on the ground when class let out. The humidity was a very low percent and I thought it was silly to close school when nothing was happening. I drove to my aunt's house in Damascus and I played with my cousin, Raelyn while I waited for my sister to get out of school. We waited for the snow, by the way school was acting, I was expecting to be snowed in. I fully intended to go to school today. 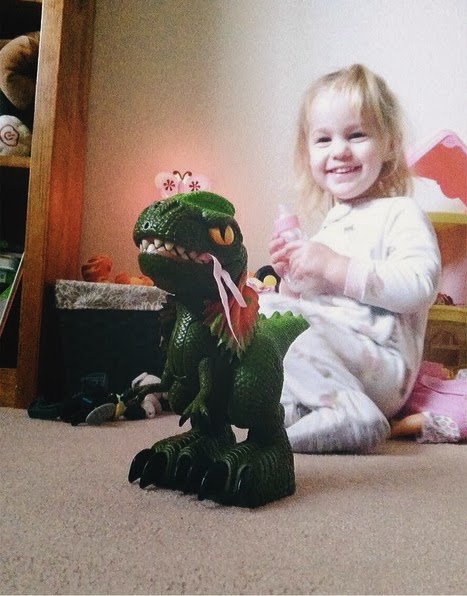 Raelyn and I played with her dino, and her doll house. We listened to children's stories on Podcast and we listened to Disney songs on Pandora, and all the while we kept racing to window every few minutes to see if there were any falling flakes. Only whimpy, tiny, you-have-to-squint-to-see flakes were falling. There is a cute video of Raelyn and her dino on my Instagram if you would like to check it out (@courtyb34)
Later, when I picked up Brittney, there still wasn't any snow, but as we drove home and got closer to home, there was already a massive accumulation of snow! I was so excited! It was a blizzard by 1:30 PM. 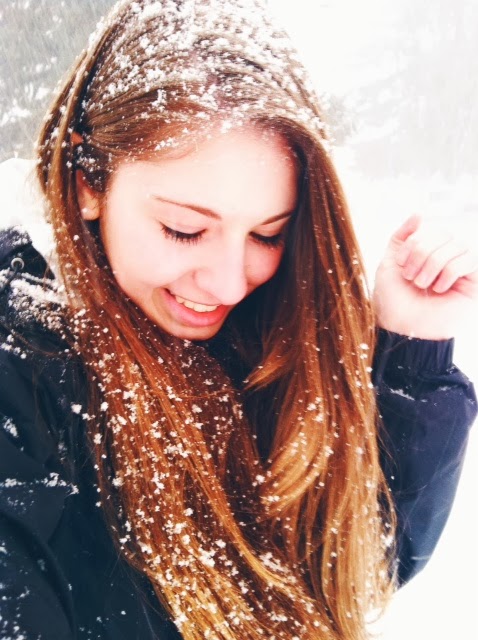 I didn't know I wasn't supposed to go pick up my mom from work, my dad didn't notify me that he was planning on picking her up, so I wiped off the snow from the back windshield of my car with a little car towel, my hands grew numb, and I nervously got in my car and drove down the street, not even five minutes to my mom's work. Just down the street, I turned very carefully, I was fine, as I drove and I was breaking to turn into the turn lane, I started sliding. I was so afraid! Second time I had slid in terrible weather in my driving experience. Luckily, the street wasn't too busy and I picked up my mom safely. Unfortunately, my hands were in so much pain as the blood was rushing to my fingers and trying to warm up. Such pain, I was moaning in the car and crying.
For the rest of the evening, my hands warmed up and I spent most of the time looking outside at the winter wonderland that covered the streets of Portland.
This morning, I looked outside first thing, and all of the lovely snow was still there, of course it was!
I really wanted to expose my Hunter boots to the elements, so I went out to play. 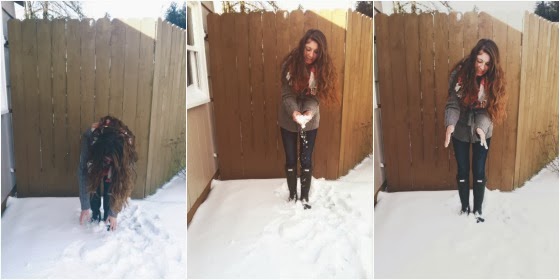 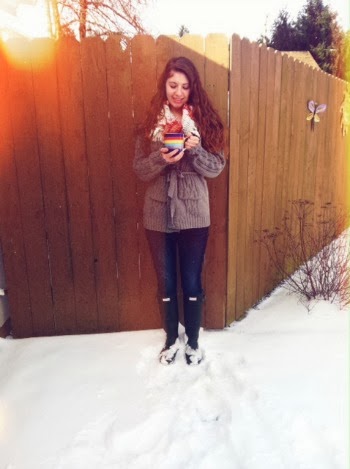 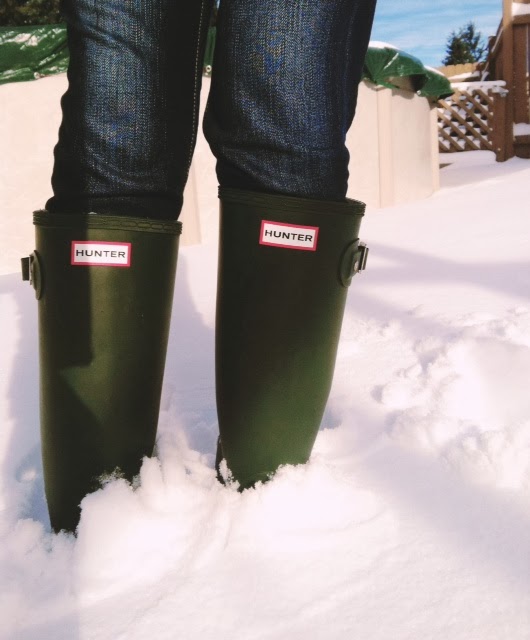 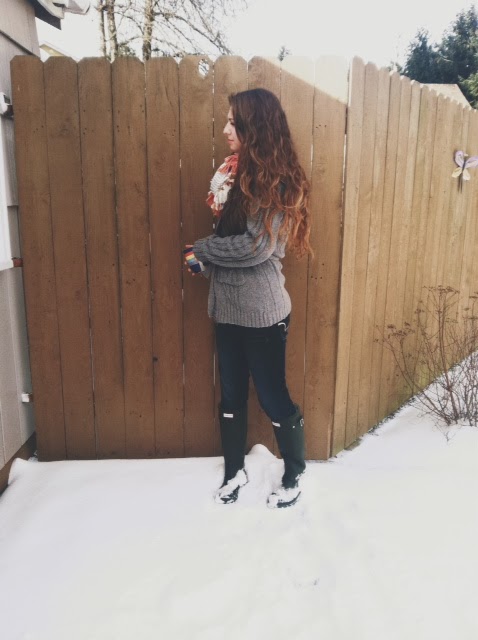 I would go in sessions, wait a little bit, and then go outside. It would be in a pattern of every hour. I couldn't resist pulling on my boots and going outside. I was just waiting for the snow to start falling again, and sure enough it did. It snowed straight for 8 hours today! I was so excited! 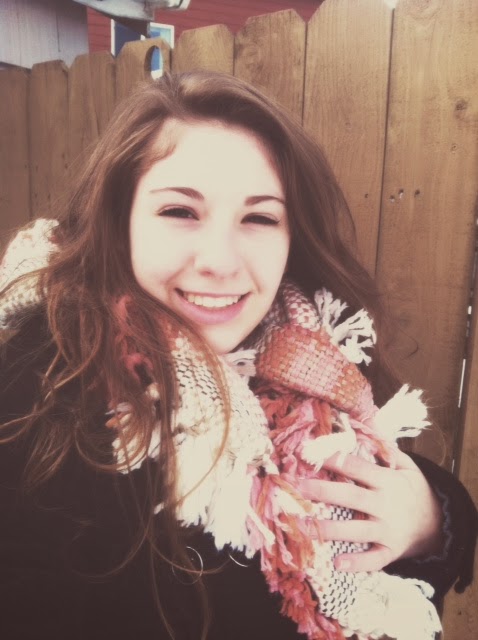 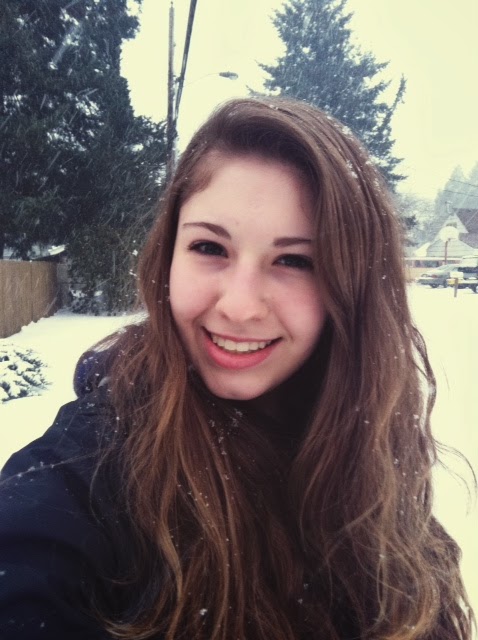 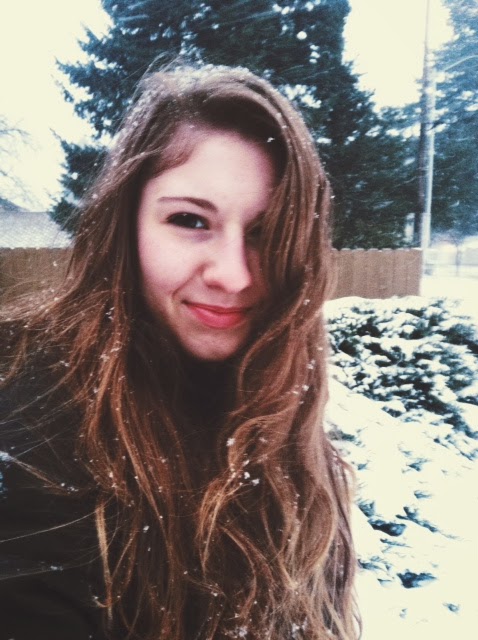 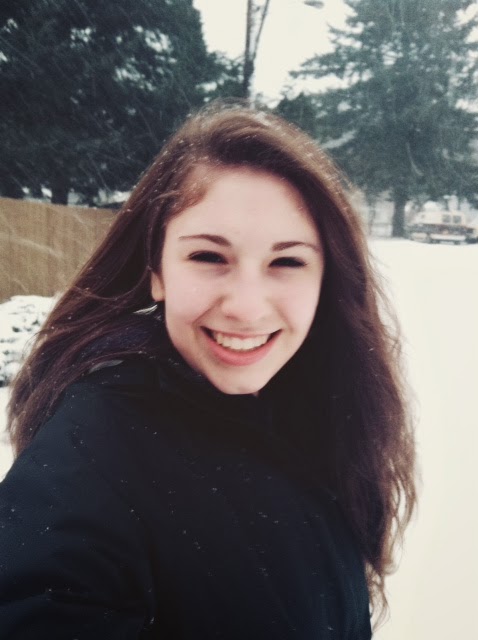 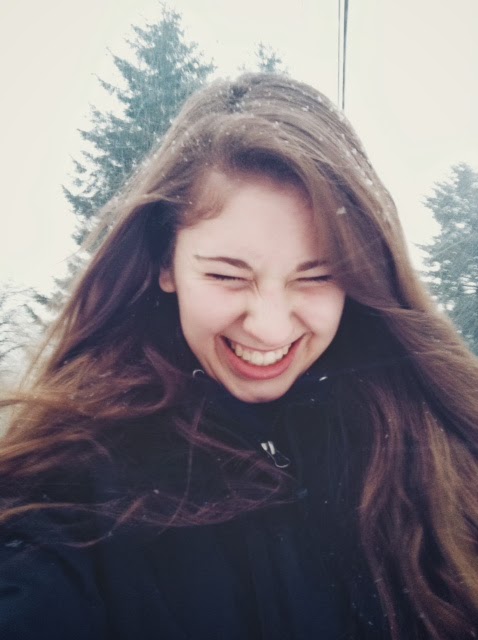 I am zany over snow selfies. It was the only way I could really capture the snow falling. It was pouring snow!
I also attempted a mini snow woman, but the snow was much too dry for me to make the snow balls for the snow woman's body. I did make one, but it was so windy that she fell over. It was a small one, so it couldn't handle the gusts of wind. I didn't have the energy to make a big one, and it would probably fall apart because the snow is too dry.
One of my favorite things to see in the snow are the green trees with the beautiful patches of snow resting on the branches. 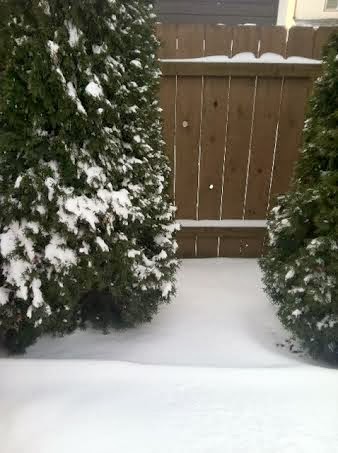 My dad also found little bird prints in the snow. That isn't something you see too often. They were adorable! 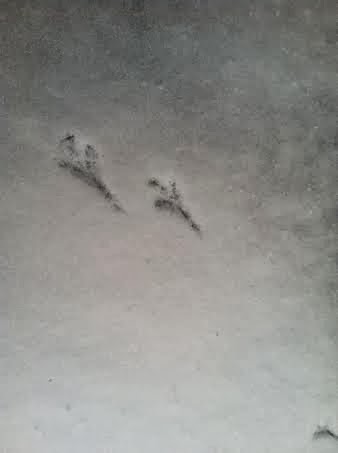 Well, my wish came true! I wanted at least one snow day my senior year. One snow day before I go to Pensacola and will very rarely see snow... although last week, Pensacola did experience snow and three days off from school...so we will see.
I will always truly be an Oregon girl though, where it can experience any kind of weather, from snow to sun. (even if the snow is rare here as well)
Labels: Cousin February Gresham Hunter Boot style Hunter Boots Oregon PDX Portland Snow snow day winter