Last week, I asked my aunt Shawna if I could accompany her at the zoo today, and she said of course! I try to find any opportunity to go to the zoo. I love the Oregon Zoo. We started early today, we met my aunt's friend at the zoo, we bought our tickets, and went on our way. The kiddos received a fun scavenger hunt where they go to the different animals, and collect stamps until you finish the scavenger hunt and they received a wonderful, healthy prize. The kiddos come into the zoo all dressed up for Halloween. Isabelle was Pooh Bear and Raelyn was a giraffe. 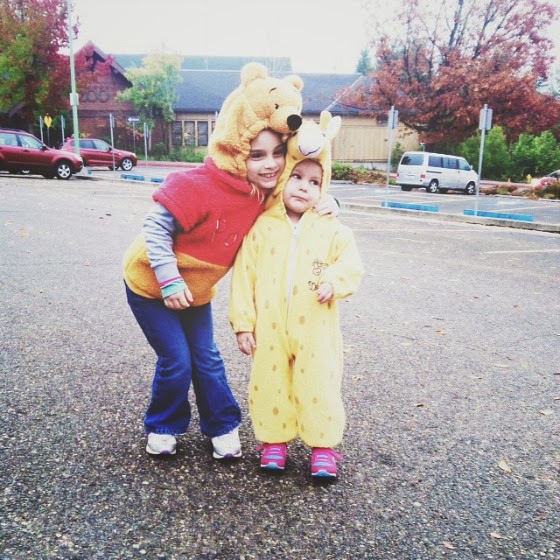 We began our zoo walk-about with the mountain goats. That is the very first exhibit in the zoo. We then walked on the bridge that lead us to the black bears. I couldn't believe how close we were! Of course, the picture doesn't show the closeness. He was sitting so cutely near his water box and he was nibbling on tree branches. It was pretty cute. We also found the eagles, turtles, otters, beavers, ducks, all the animals found in the great northwest! The otters were flipping around and swimming around, it was hard to get a good picture of them. I attempted to get a good picture. I only took pictures of the otters and the ducks. There was a wooden fence to separate the zoo guests from the duck pond, and there was a duck sitting on a log right below the fence railing. We were so close to this duck! 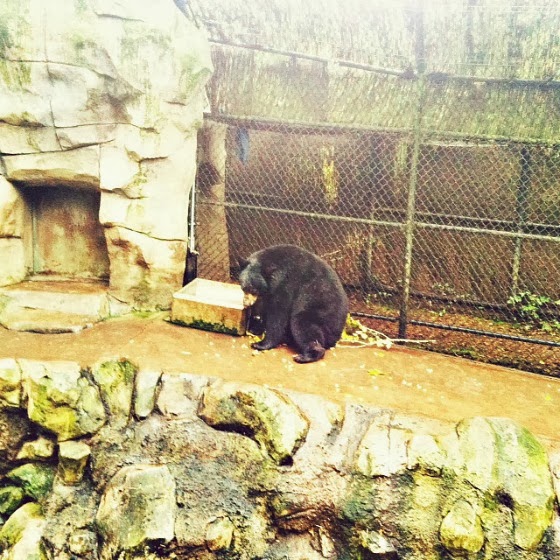 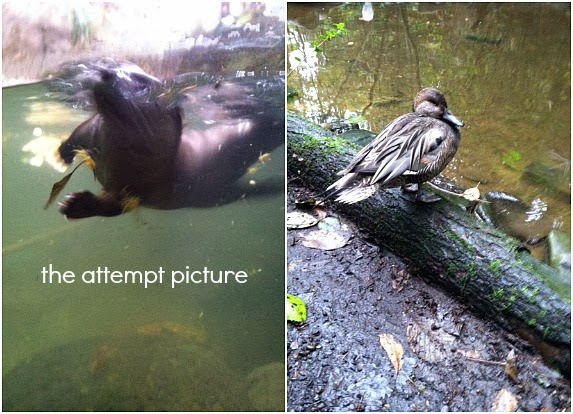 I love visiting Stellar Cove at the zoo, there you can see the sea lions, and the fish, and an underwater forest. Right down the path from Stellar Cove, there are the polar bears and penguins. I love visiting the polar bears. They look so cuddly and sweet, but they are bears! They are predators. Still very beautiful beasts.
I love this picture I took of the polar bear. You can see his reflection in the water, and he is munching on a whole pumpkin! I love how all the animals received fall treats. You could see them in their habitats and sometimes the pumpkin was completely destroyed, or sometimes the animals would take little bits and pieces from it at a time. It was so cute. 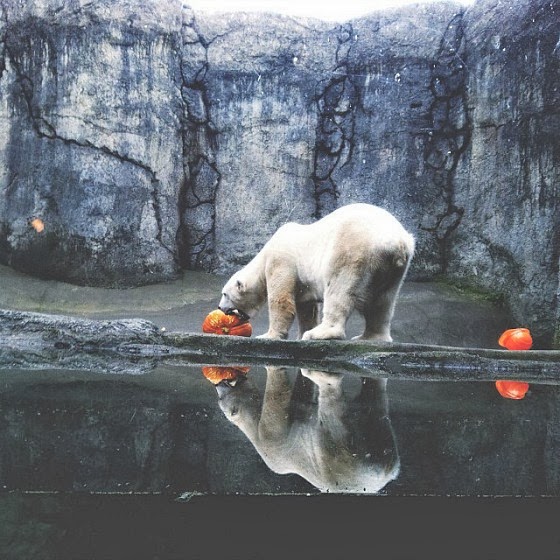 They had all sorts of activities for the young sprouts. They had a booth about the wolves, and I donated to their foundation. I received a sticker and a refrigerator magnet. For the kiddos, they provided the materials to create your own wolf mask. You could sprinkle glitter on the wolf mask, and wear it around. While the kiddos were coloring their masks, I decided to grab them a treat. I went and bought them an elephant ear and we all shared it! (It was expensive!) I love elephant ears. Of course, anything fried is delicious. 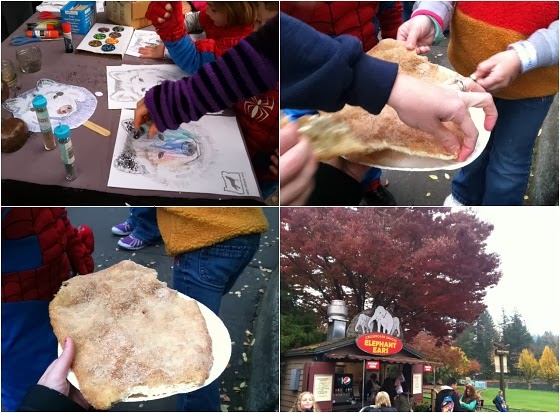 After I shared the elephant ear with the kiddos, we went and visited the primates. I am not a big fan of monkeys... ever since I saw the movie Outbreak, where the monkey brings the disease to the little town of California, I have not liked monkeys. I find them disgusting. Not a big fan of monkeys. After the monkeys, we went to visit the elephants. I LOVE ELEPHANTS. They were Asian elephants and I was a little disappointed to only to see one elephant. They were cleaning the inside habitat exhibit, so the elephants were not out for the zoo guests to see. I was very disappointed, but seeing the one elephant today made my day! 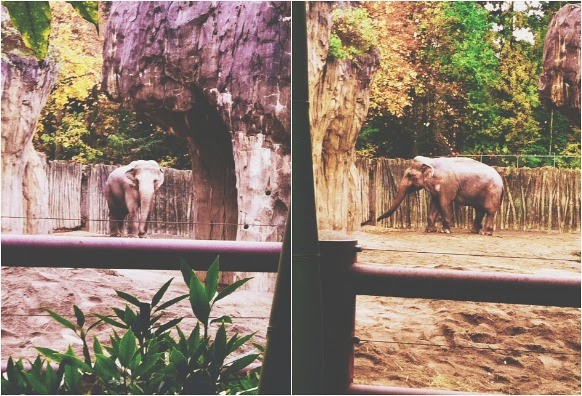 Inside the elephant exhibit, they had the table where the zoo keepers stamped the scavenger page, and you would receive a coloring page with the new baby elephant (who is almost a year old now). I grabbed one for myself because I love elephants. They had some activities in there for the kiddos, they had giant puzzles for the kids to do. I also saw an elephant family tree, the heritage of the new elephant Lily, and the wild elephants in her past. Lily's herd has an adopted "auntie", she was once wild and is now in the zoo, which is sad, but kind of cute that she has an adopted "auntie" in the herd.
After the elephants, we walked around the AfriCafe, and went into "Africa" at the zoo, where the lions and the giraffes and the hippos were at. Seeing the lions made me think of Punky, my kitty that passed away in February of 2013. My mom and I were talking about it, and we both agreed that Punky was fiercer and more majestic than those lions. Ha! Within the Africa exhibit, there is an old Land Rover/Jeep safari mobile that is embedded into the wall, where the kids can play around on and pretend that they are driving on a safari. It's pretty cute. 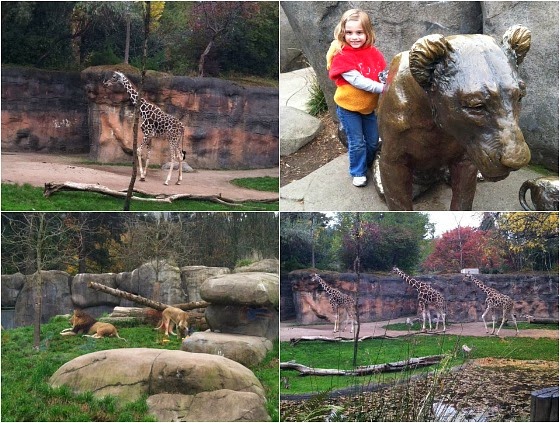 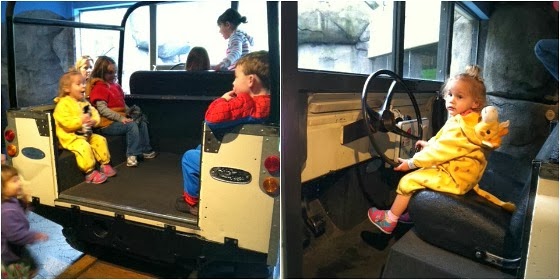 The hippos cracked me up. One was standing on all fours and resting his heavy head on a rock, while the other was swimming about. It was too funny.
We went and looked at more reptiles in the "flooded rain forest". We saw a little alligator and it made me think of the Florida GATORS. Since I want to go to Florida, I have decided to become a Gators fan. I am going to make a plaque that is painted in blue and orange and write on it, "Gator X-ING" So cute!
There was a fun little area where mongooses would run around in their habitat, and there was a little tunnel and in the middle of the tunnel, there was a bubble you could stick your head up in, and watch the mongooses up close. It was pretty cute seeing the kiddos watch the little critters up close. 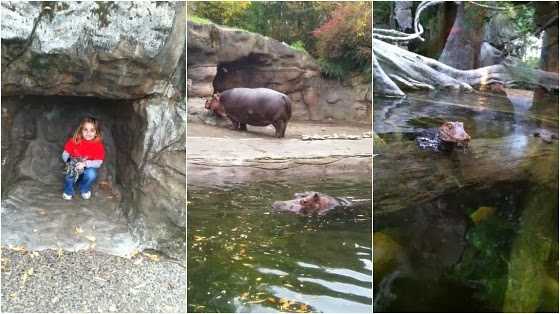 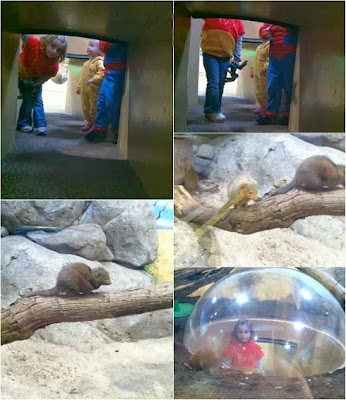 All of the reptiles were so neat! We also saw some flamingos and frogs, and we saw the goats at the petting zoo. The kiddos were feeding the goats leaves, but there was a sign that said the goats were on a strict diet. I don't think a few leaves would hurt them though.
Next, we went to the lorikeet landing. At the Oregon Zoo, you can feed the lorikeets nectar. They come and land on your arm and eat out of the cup. I took Isabelle into Lorikeet Landing and we fed the birdies! She was so anxious to have a bird land on her hand, and I tried helping her, but you just have to be patient. 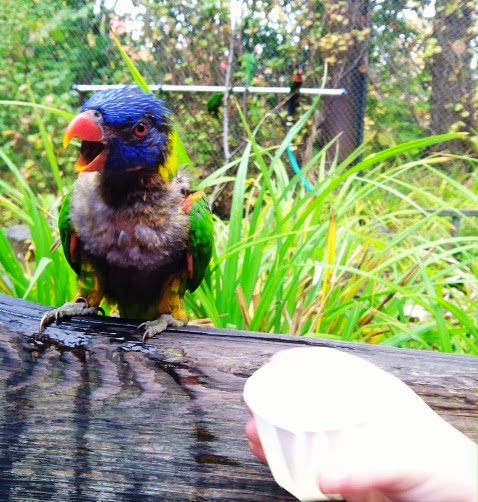 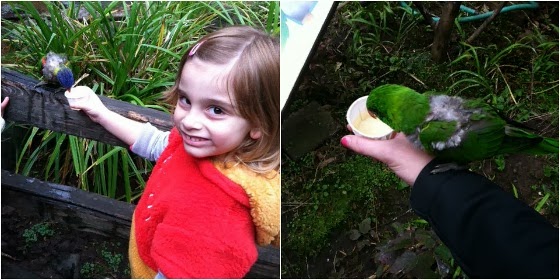 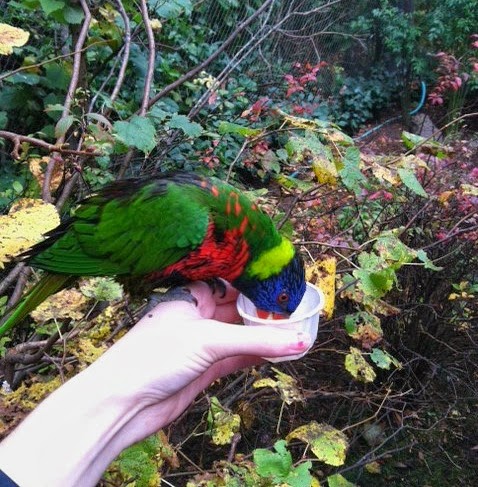 And then, a lorikeet finally landed on her arm and she was so excited! 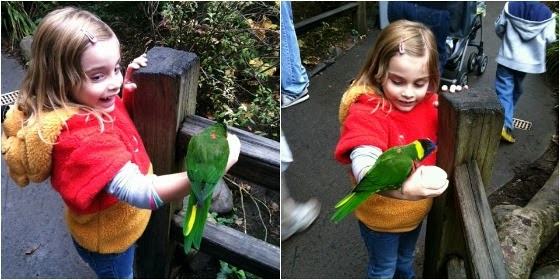 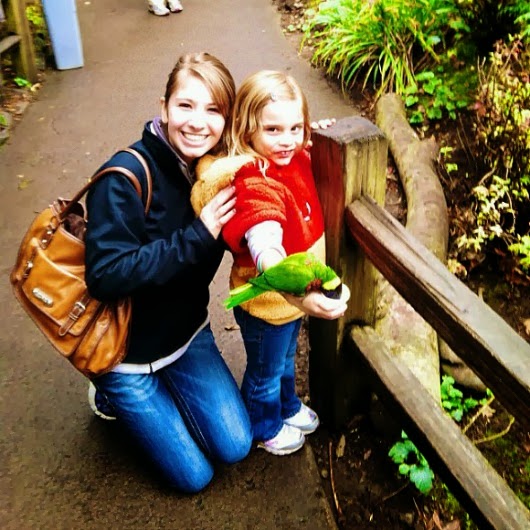 After the lorikeets, we went and looked at the big cats. The tigers were in a dark den, so it was hard to get to get a picture, and the leopards were hard to see. We did see the big cats though.
We went to the zoo entrance, and the girls collected their prize from the scavenger hunt. It was an awesome prize full of health food treats. I love health foods! The prize had two mini Larabars, one blueberry pie and one apple pie. The prize also had three honey sticks, a cereal bar, some animal stickers and a Halloween pencil. Sweet Isabelle shared some of her prize with me, mostly because she didn't really care for some of the food items in the prize bag.
I love health food treats.
Today was a great day. I loved spending time with my aunt and her friend and the kiddos. It was a busy day! But so much fun. 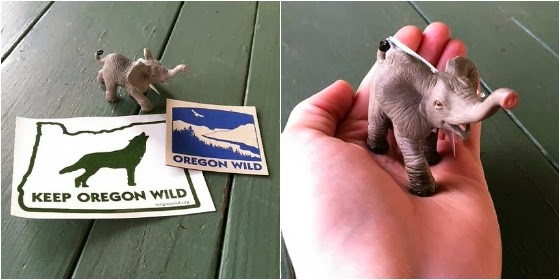