Last Saturday, it was a full blown, busy day! It began with my Aunt Aimee's baby shower, and then a concert at Laurelhurst Park. My grandma, my mom, my sister and I were all planning a baby shower for my Aunt Aimee and our little cousin, Quincy, who will be arriving in September. We had a few last minute decorations and food items to prepare before the guests started arriving. I had to make tissue paper pom poms (tutorial in tomorrow's post), and I had to make punch. Brittney and I taped up the "baby shower" banner and I taped up the pom poms. 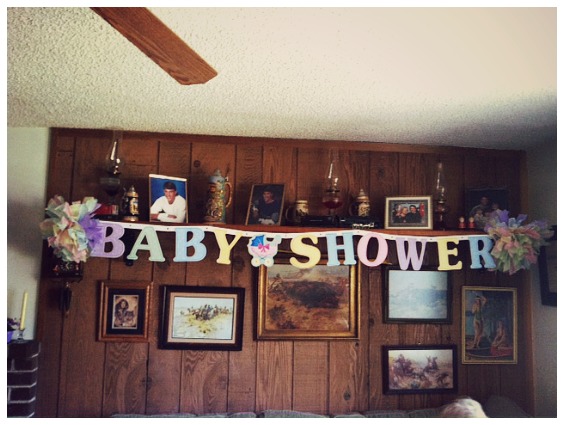 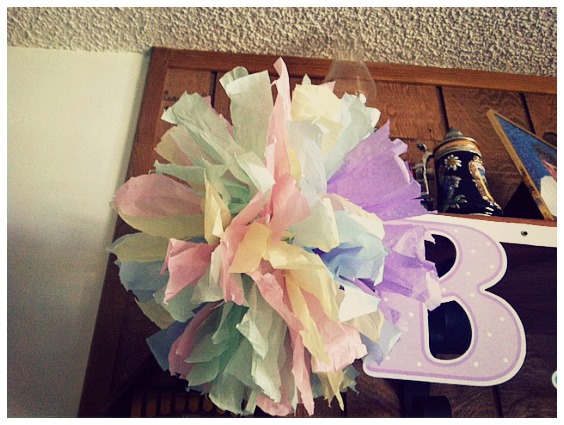 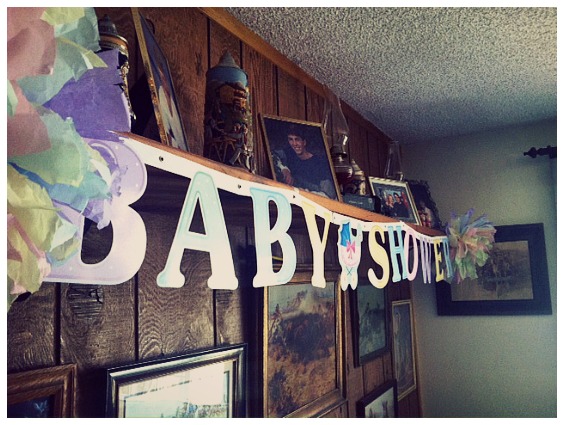 If you are wondering who those dapper gentlemen in the pictures, on the shelf, above the "baby shower" banner are, on the left is my Uncle Randy (married to my Aunt Aimee) and on the right is my dad. Those pictures are their graduation pictures.
The baby shower food was splendid! Brittney, my mom and my grandma did a fabulous job on the pink champagne cupcakes (made with pink champagne). Brittney was the chocolatier, and made those hearts with melted chocolate chips, a ziploc baggy, and wax paper. Glad they didn't crumble when she placed them on the cupcakes. I was very impressed, being a cupcake enthusiast. 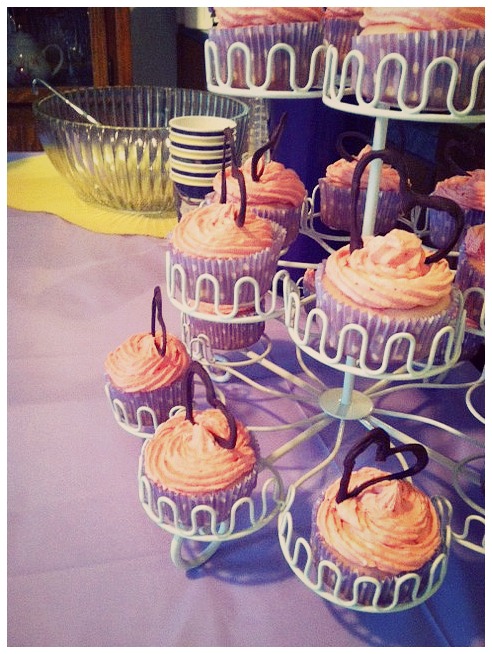 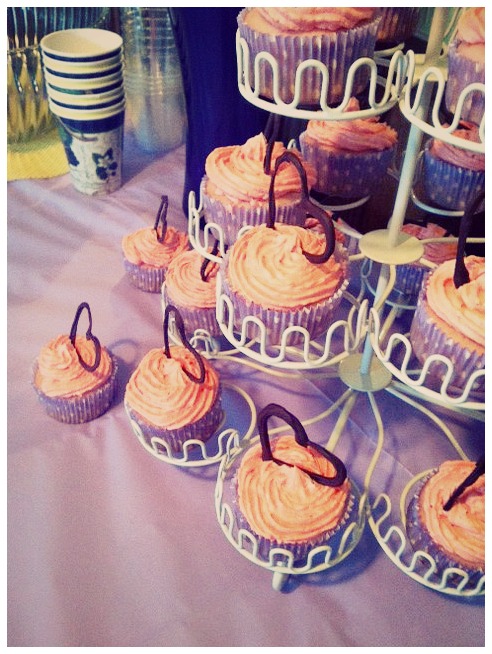 And then we brought the rest of the food out. We had meat, cheese, and crackers. We had chicken and pasta salad, we had stuffed baguette... or stuffed Italian bread (because WinCo didn't have baguettes at the exact moment my mom went to the store to buy the food for the baby shower. Fooey), we had a fruit tray and tortilla chips with mango-avocado salsa to scoop up. One of things that I love about little parties like that is because of the finger food provided. 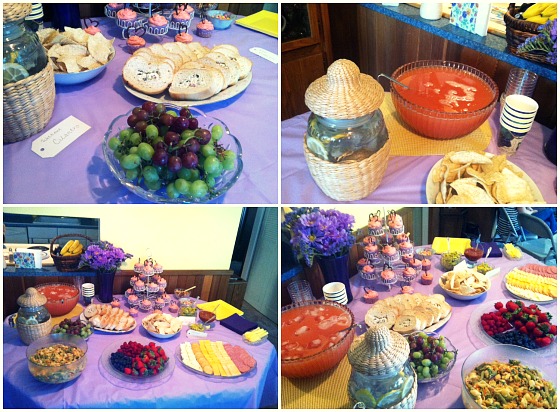 The clock was ticking, and the guests started arriving.
And of course the guest(s) of honor.
I had to snap the picture fast because there were other guests behind her that were coming in as well. I had to rush to take the picture. 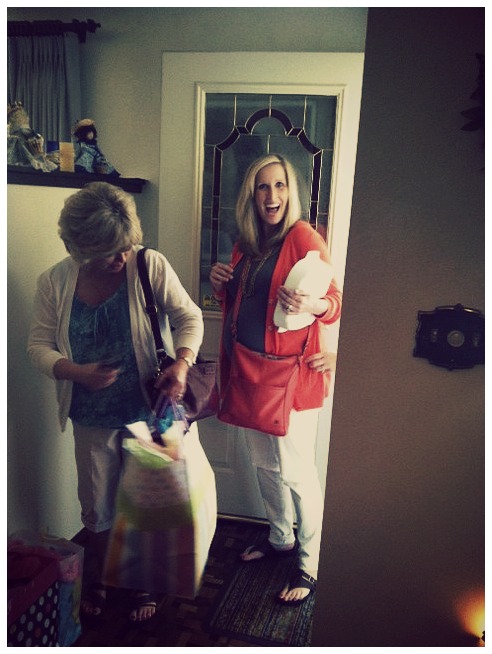 We began the party with the food, and then a few simple games, and then presents! The presents were piled around her. A mountain of gifts from loved friends and family.
She received so many adorable outfits, and beautiful, handmade blankets, and burp cloths. It was fun watching her open gifts.
I made her a mobile for baby Quincy's room, and I was so excited for her to open it.
A funny story about the gifts, my Great-Aunt Phyllis (my grandma Anne's oldest sister), Aimee opened her gift first and one of the many outfits she received from Phyllis was this adorable lemon, footie pajama. It is the cutest footie pajama, it has little lemons all over it and one bigger, smiling lemon near the shoulder. A little bit later, my Grandma Anne's present was opened, and the same lemon, footie pajama was taken out of the bag! We thought, "Oh, they are sisters, they think a like.". It was still a bit humorous, until my Great-Aunt B's gift was opened (my Grandma Anne's middle-oldest sister, there are three sisters: Phyllis, Bernese, and Anne), Aimee received THREE of those adorable, lemon, footie pajamas! Everybody was hysterical when she held up the last lemon, footie pajama to be opened. It was hilarious. 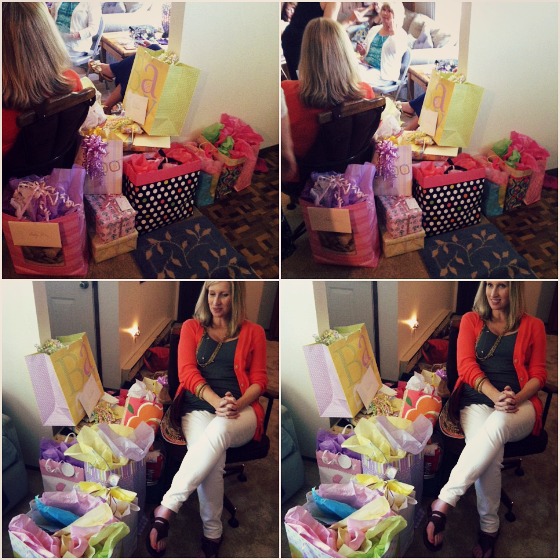 Here is Aimee holding up the mobile I made. 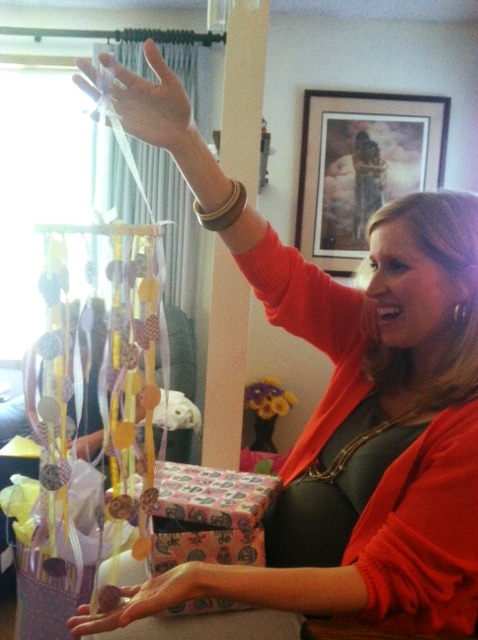 The baby shower came to an end, and I wanted a picture with my Aunt Aimee.
I love her very much and I am excited to meet my new, little cousin, Quincy. 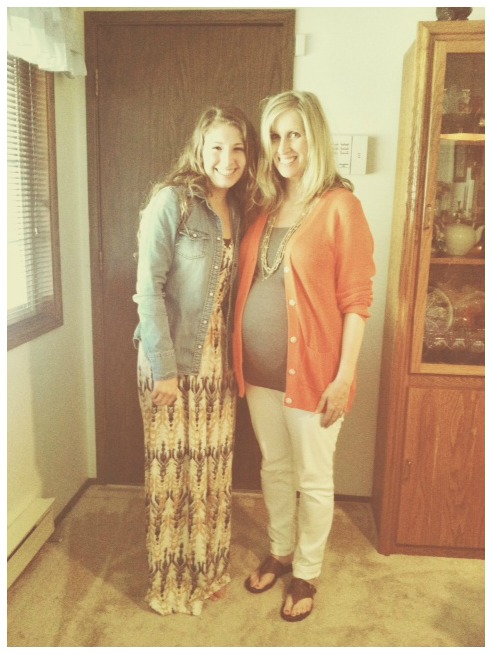 The last event of the day took place after we cleaned up a tad bit, packed up some snacks, drove home for a quick second to change, and headed off again to Laurelhurst Park for a concert. The first few weeks of summer, my grandma asked me if I would be interested in going to concerts in the park, and I told her that I would love to go. We have already been to one concert, and on Saturday, we went to a symphony in the park. All the musicians were in their white jackets with their instruments, the conductor looked like Einstein. It was exquisite, and a pretty good turn out. 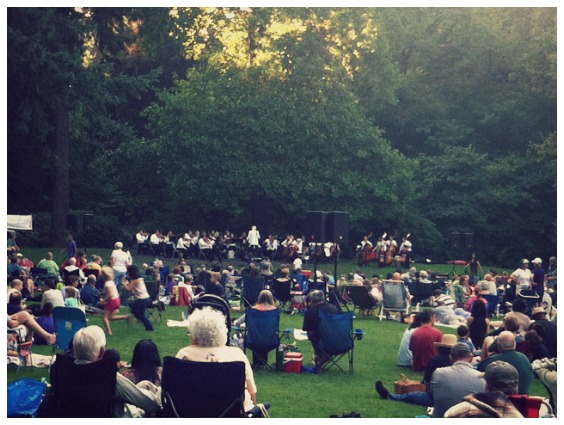 From the side... (I swear... this lady looked like Ina May Gaskin, the lady in red who is standing in front of the symphony. I know it probably wasn't her, but the woman looked exactly like her. That would have been so cool if it was Ina May! If you don't know who Ina May Gaskin is, she is a legendary midwife and one of my idols.) 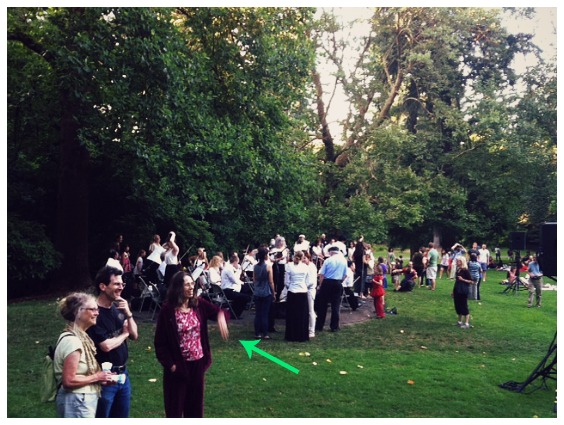 We brought left over snacks with us from the baby shower, and it was lovely to sip punch and listen to "long hair" music. My Great-Aunt B asked me if I liked "long hair" music. At first, I didn't know if she was complimenting my long hair, or talking about something else. I asked what she meant and she said that "long hair" music is a term for classical music. I had never heard that term before. 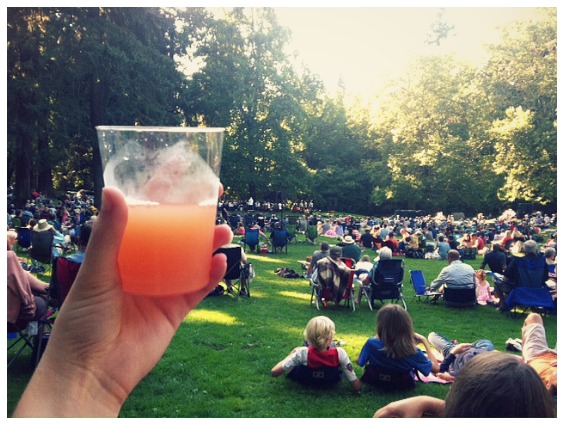 Off to the side a bit, there was this adorable couple that were engaged in ball room dancing on the grass. It was quite beautiful. I tried to snap some lovely pictures of them dancing, but the sun was too bright against them, and using my phone to take pictures, it didn't turn out so well, so I made it into a gif.
It was a lovely evening, lots of laughter and lovely music, many sweet treats and interesting people watching.
It was a lovely day.
Labels: Aunt Aimee baby shower concert concert in the park cupcakes family grandma biggs lilac and yellow park party Portland Portlandia symphony