Yellowstone Trip! Day 4: In the Park

What a sticky day that was! Between the spray-on sunscreen, and the Cutter bug spray, the sun beating down on us, the smell of sulfur, a muddy new Nike (twice with the same foot), and being surrounded by flies while eating bad  pizza, a very sticky day it was.

We began the day by seeing a herd of elk right smack dab in the middle of Mammoth. There is a little town right outside of the Mammoth hot springs, and it is sort of like Yellowstone headquarters. The elk were just lounging on the lawn and people were taking pictures. We were too far away to get a good shot, so I didn't even try to get pictures. It was really cool to see though, the elk were so calm and just lazing around. Then we witnessed a coyote walk down the street. The animals must love to cause a traffic jam. They walk in the road constantly! This coyote was kind of scraggly looking. 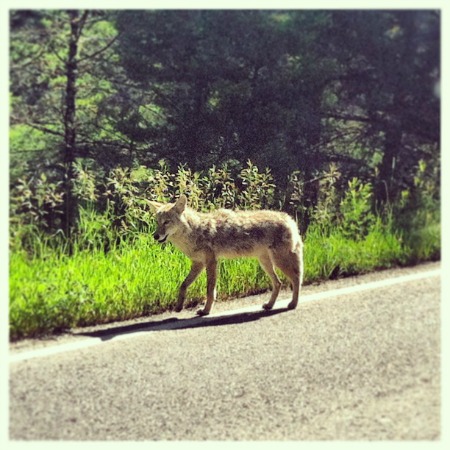 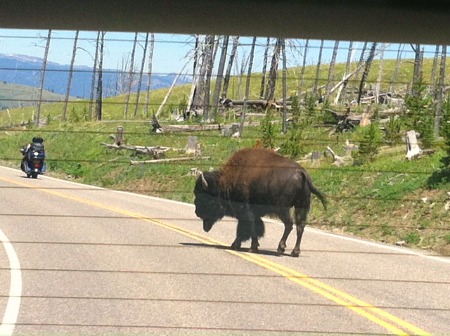 This was all on the drive to see the petrified tree, a place where you are swarmed with countless types of bugs. My grandpa threw a rock at the tree, and I'm very thankful a park ranger wasn't around... Grandpa could have been in big trouble... not good. 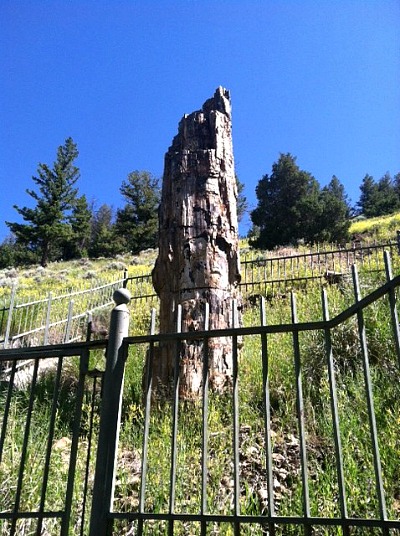 After the petrified tree, we drove up to Dunraven Pass, where the elevation is 8,859 feet. We met a man from North Carolina who was so kind, and I trusted him with my phone to take a picture. He was fun to listen to because of his accent.

We then drove down a little further past Floating Island Lake (where the islands float!) and right before going to Tower Falls, we sat in a long line, construction you know. Sitting for probably 45 minutes, and killing a mosquito on the ceiling, leaving it's guts in the fabric of the car ceiling. Lovely. Used a baby wipe to try and get the guts out, but only smooshed the guts in more. A man drinking out of a water bottle came up to the car, and said, "Oregon huh?" in a southern "redneck" accent, "You got good beer up there!" ha... The day started off bad... but we eventually arrived at our destination!

Tower Falls. They had a little gift shop there where my sister and I bought our parents wine corks, and I bought myself a lavender colored mug with the saying "I'll be your Huckleberry" on it. Kind of cheesy, but perfect for me! When I got home, I noticed that the bear on the mug has a little crack up the bear, I was kind of mad that I didn't catch it when I was at the gift shop, but nothing I can do now. After we browsed around some more, we walked up to Tower Falls. I was trying to get a picture, but there were so many people crowding the look-out. When I finally got my chance, I accidentally stepped in a mud puddle, got my sock all wet, my new, lavender Nikes all dirty! I was so mad, so sad, so ready to complain. That's why I bring two extra pairs of socks with me.

Tower Falls was very pretty. The mist at the bottom of the falls made a pretty rainbow, and it really was a tower falls, the falls basically went straight up and down. 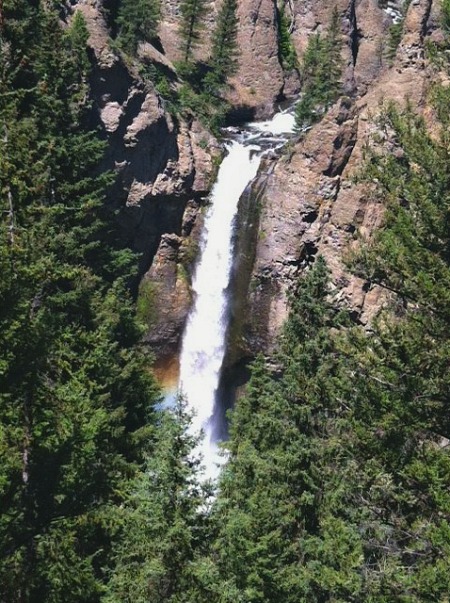 It was something you could look at for only a few seconds and then you were ready to move on to something new. We got in our again, went the opposite way of the construction, and went to The Grand Canyon of Yellowstone National Park! When we arrived there, my grandma noticed a bison off to the side of the bathroom building. There was a small group of people standing right outside the bathrooms, and we said, "Did you know there is a bison like, four feet away from you?" They peered around the corner of the bathroom, and they said, "There is a bison right there!" Of course. They everywhere. We then saw a crowd of people huddled together in a field next to the bathroom building, and of course we had to go check it out... and get closer than everybody else. It was a bear that everybody was looking at. We crept into the woods behind the trees and took pictures of the bear. Oh my... my grandma was getting nervous. 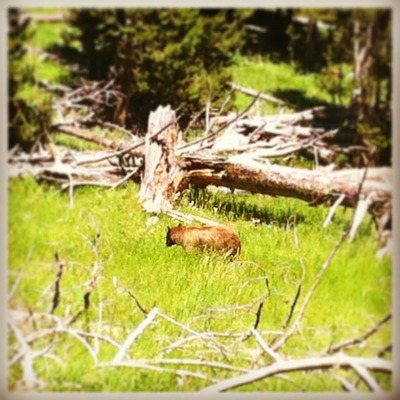 The park ranger didn't like it either. He told us to get out of the woods and come back with the group, so we did. No messing around with the bear. He's the boss.
After watching the bear for a few minutes, we decided to go see what we came here to see, the Grand Canyon of Yellowstone. And once more... I was trying to take a picture, focusing on the subject of the picture, and I stepped into another mud puddle with the same, exact foot, only this time the mud puddle smelled. Lovely. I, of course kind of flipped out. I was trying to keep my shoes clean and tidy. I like to keep my shoes clean and tidy. I was so angry about stepping in the smelly, mud puddle. I decided to forget about it and enjoy my time. My goodness, did the view pull me out of my funk! It was absolutely beautiful, and the water was so green! When you walked just a little ways to the left, there was another look out, and this is where you could see the falls. The falls was wide and powerful! And very green! 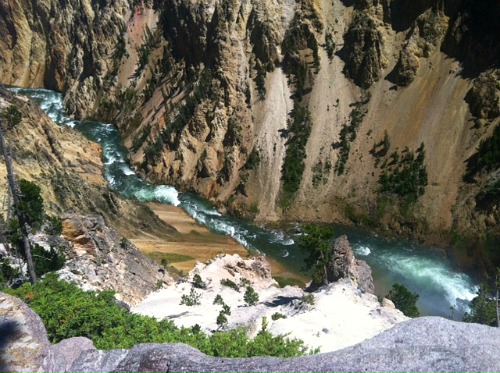 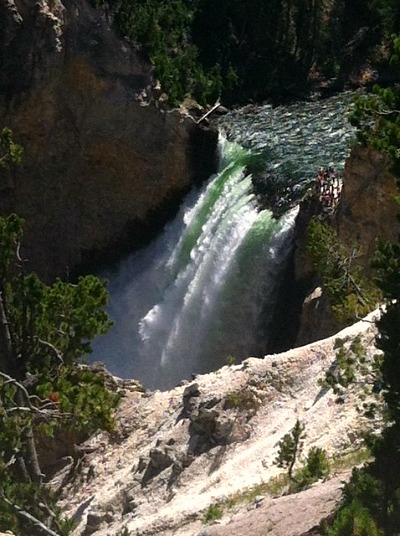 We saw a ledge where people were standing on. I wanted to visit the ledge and see the falls from up close. It was worth the little hike down to the falls. It was absolutely beautiful! The Yellowstone River is absolutely green in the Grand Canyon of Yellowstone. When I hiked down to the ledge, you could see the drop off of the waterfall. It was right there, in your face! Oh wow, it was breathtaking. 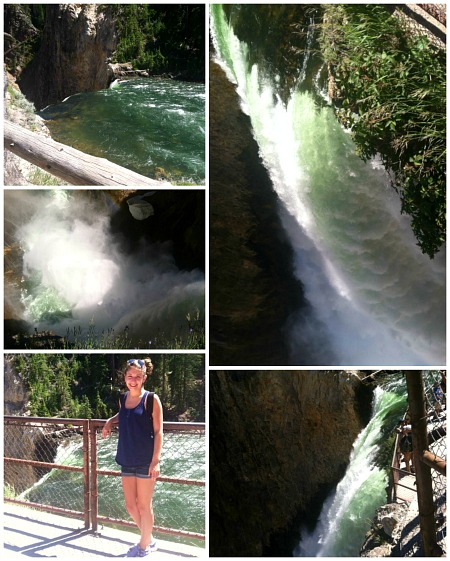 There was an upper ledge and a lower ledge overlooking the falls. The lower of the ledges is where you can see the falls up close and personal. The upper of the ledges over looks the Grand Canyon of Yellowstone and the Yellowstone river. It's a beautiful view, with the waterfall's mist creating a rainbow with the sun. It was a beautiful view and I could look at it for hours and hours. 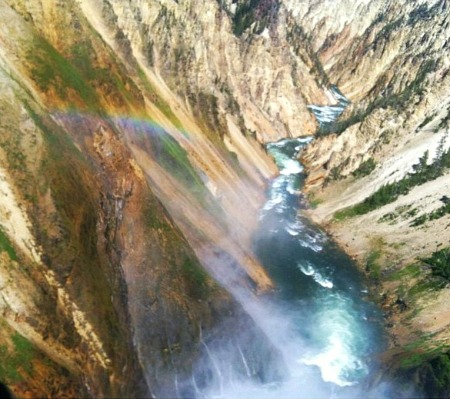 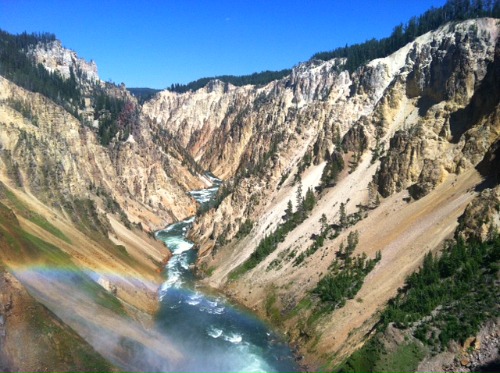 It was absolutely beautiful! We hiked back up to the parking lot and got in the car, and then we visited some smelly places. We went so a sulfur cauldron, a black dragon cauldron, Dragon's Mouth hot spring, sour lake, churning cauldron, mud volcano. All acidic, sulfurous mud or water. People were holding their shirt collars over their noses because it smelled so bad to them, I don't mind the smell of sulfur, it really wasn't that bad. 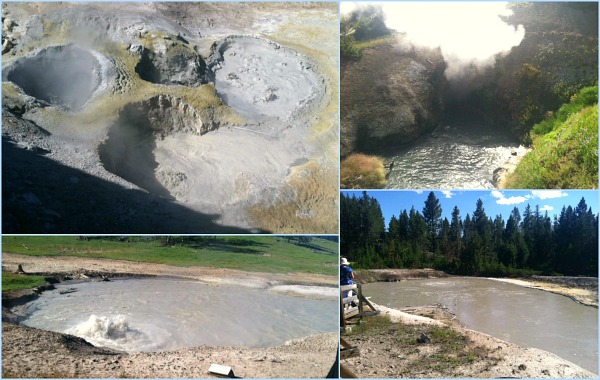 We drove down to the Lake village to refresh ourselves and on our way out, we see these people huddling behind a tree, taking pictures of a buffalo. They were probably ten feet away from it, using a tree trunk as their protection. Not a good idea. The bison was walking away from them toward a couple trees and I wanted to get out and take pictures. I ended up filming most of the time, I was close. About 20 feet away from it. That's close! The bison sauntered over to the trees and started scraping the bark off the tree with his horns and eating the bark. It was crazy! I didn't know that bison ate tree bark, that was very fascinating. While I was filming this amazing scene, I met a nice family from California and all we could say was, "This is so crazy!" because it was. Then the people who were ten feet away from the bison come down and they start bragging that they got better pictures than what we were getting, so I told them straight out, "That's dangerous to get too close." And they said, "Well, we got better pictures." Whatever, get killed, your own fault. I got it on film too.
The video will be at the end of the post in my "day 2 of yellowstone" video.
Here is a picture of the bison. 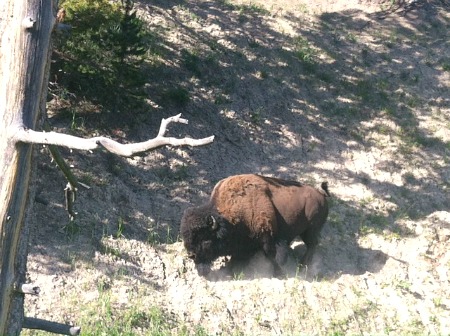 My goal of the day was to make it to the Grand Prismatic Spring. We were trying to get there, but there were so many things to see. We did eventually get there after taking pictures at the Continental Divide, 8,391 feet. (We had been higher in elevation earlier that day). 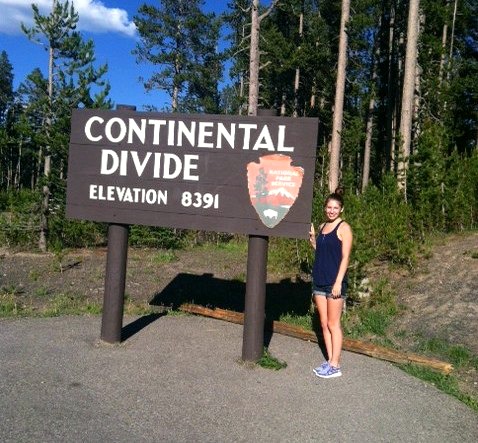 Seeing herds of buffalo. These people were all in awe over one buffalo across the street, and we look over to the left, and we see HERDS of buffalo. We thought it was kind of funny that they were looking at just one buffalo, when right behind them were herds of buffalo. I didn't get very good pictures.
We also went to the Black Sand Basin. This area was so pretty! Shooting geysers, glorious blue pools, a lovely creek right in the middle, it was beautiful, and a place with full bars on extended service. I uploaded a few instagram pictures at the Black Sand Basin.
I thought that the Sunset pool should have been named the Rainbow pool, because the Rainbow pool only had the aqua color in it, when the Sunset pool has many colors within it. Maybe from above, it looks so colorful. 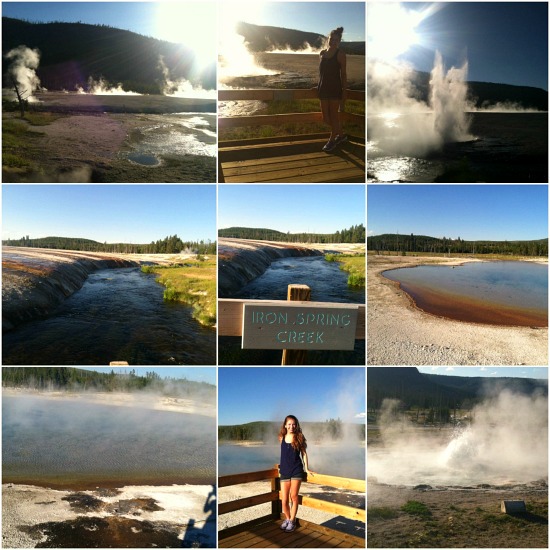 In this one pool at the Black Sand Basin, we saw a hat in the pool. When gusts of wind occur in Yellowstone, it's enough to take your hate right off of your head. I guess this hat was blown into the pool. 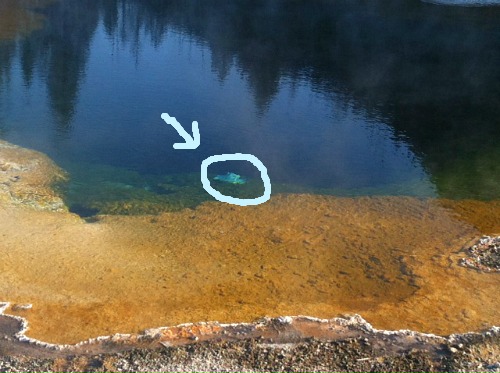 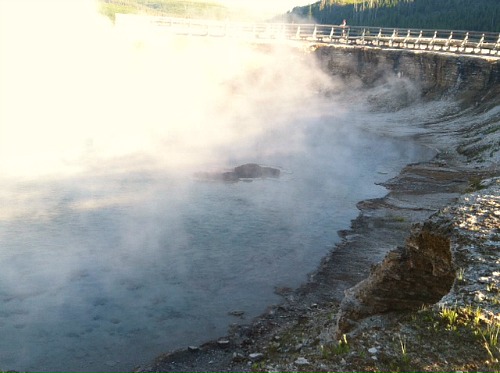 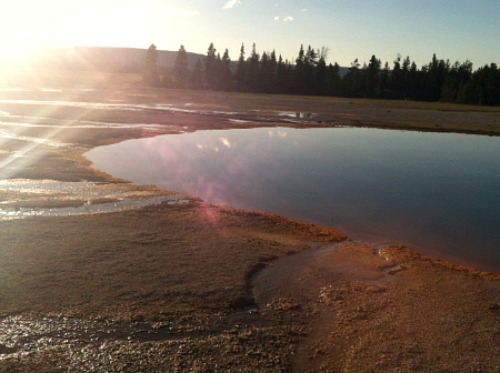 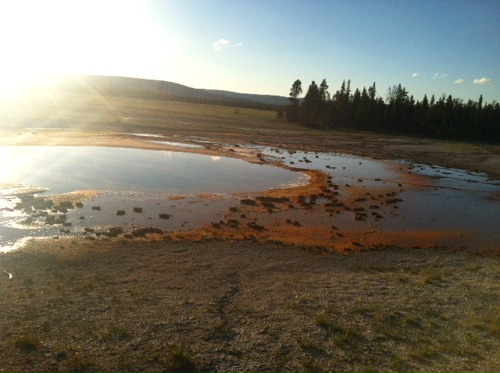 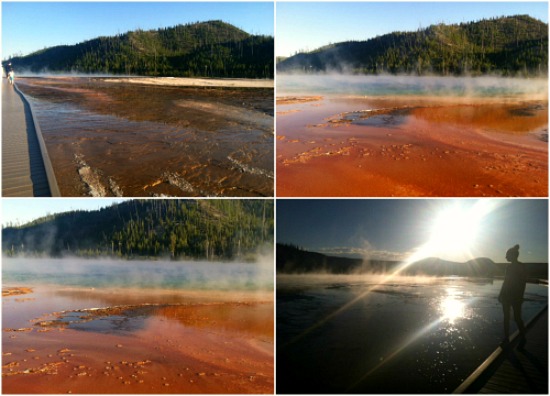 Walking back to the car, the Excelsior Geyser was steaming heavily, and walking past it, I could see my shadows in the steam. 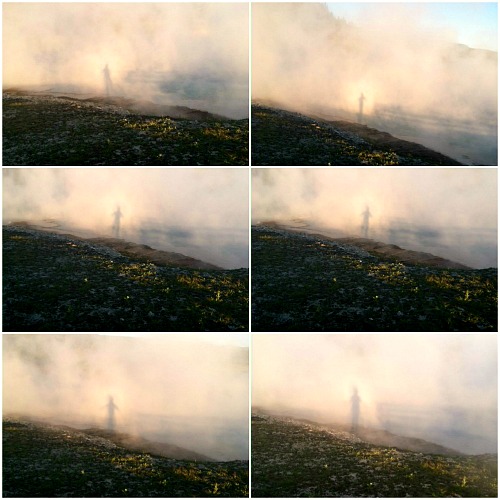 After the Midway Geyser Basin, we booked it back to Gardiner. We found a place that was still open for a late dinner, and we barely made it! We got there 10 minutes before they were about to close. This place was called Yellowstone Pizza Company, and it was family owned, family and friend operated. When we were the only customers left in the restaurant, we could hear the staff singing country songs in the back while washing dishes. It looked like it was a lot of fun to work there.
My grandma asked the lady what habaneros were, and the waitress said they are a really hot pepper, ten times hotter than the jalapeno peppers. When we were talking about what to order, my sister I said just regular pepperoni with bison meat on half of the pizza, and my grandma said, "We're going to get the Hell's Roarin' without the hell." Hell's Roarin' is a type of pizza that Yellowstone Pizza Company has to offer, and I cracked up when my grandma said that. I had to write it down in my trip journal so I could blog about it. It was so funny to hear my Baptist grandma say that.
To be honest, the pizza wasn't that great. I wasn't totally impressed. It was good, but not magnificent.
The bison meat was a little dry. I have had good buffalo meat, wild buffalo meat, and it's spectacular. The buffalo meat I had on the pizza was not super great. I was a little disappointed. 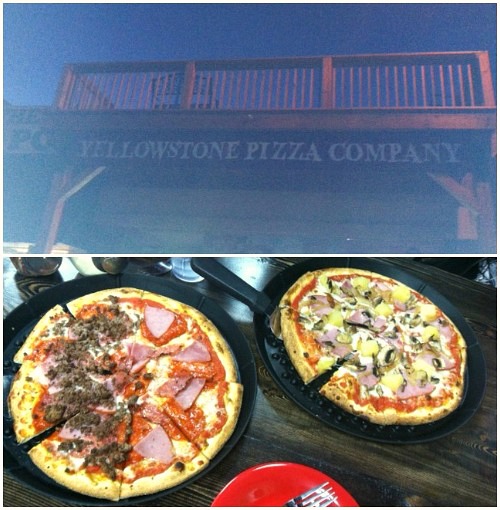