Happy July 5th everybody! Yesterday was a great 4th of July! I got to spend some time with a close friend, I ate crap all day, I made cupcakes, and watched fireworks!
My sister did my nails on Wednesday, I wanted to have cute, red, white, and blue nails for the 4th. She water marbled them for me. They turned out really cute. 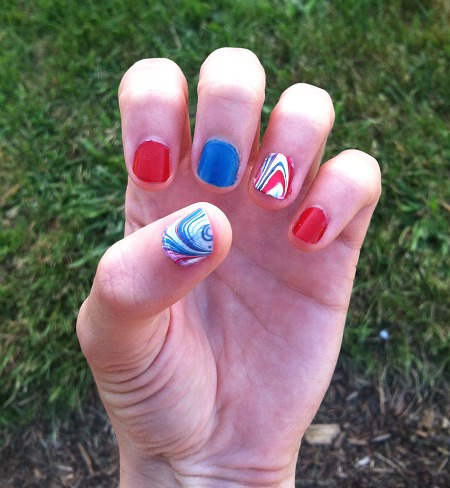 So, on July 4th, making the cupcakes really started off my day. Before that, I was browsing pinterest, trying to figure out what treat to make... it ended up being cupcakes again. I did that last year, and so I didn't want to do it again, I guess I will make a tradition to make red, white, and blue cupcakes for the 4th.
I also went to the store to buy supplies for the 4th. Chips, pretzels, cupcake stuff, and when I got home, it was cupcake time. I was kind of in a rush because I was supposed to pick up my friend, Tara at four o' clock, so I  had about two hours.
The cupcakes turned out so cute!
(Thank you, Grandma Biggs for the cute cupcake stuff)
Yes, I made it out of a box.... it's all I had time for! 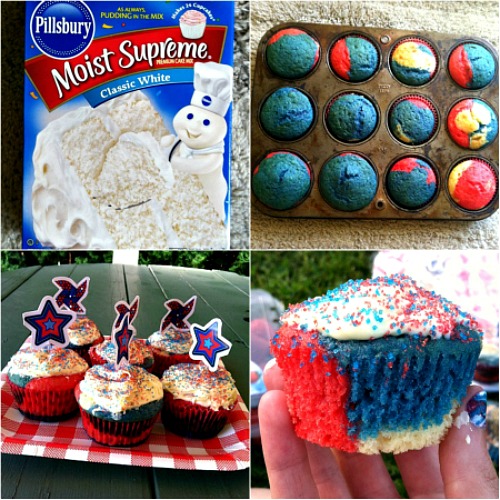 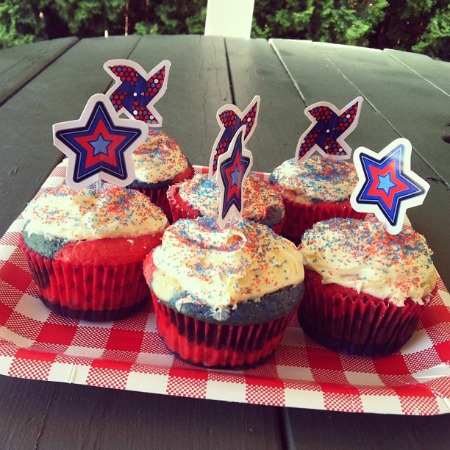 So, I packed up a bag with all the food in it, and I went to pick up Tara. We were on our way to Happy Valley park. They always have a fair type thing on Fourth of July. I used to go when I was younger, and it was fun then. Now that I am older, there is really not a whole lot to do... but we made it fun.
We found a place to sit, and we talked and ate for a little bit. It was then that I realized that I hadn't eaten anything yesterday, up until that moment. I was so busy, I forgot to eat!
We packed up again, and walked around. They usually have fun little tables and booths with something to look at... but it was kind of sparse this year. We walked through the food tents, why are they set up on Fourth of July? It's barbecue day. Maybe it's for the people who don't want to bring a bunch of stuff to the park, but still want to eat.
We then spotted the game area, where they had some activities, like rock climbing, and this spinning thing, and then this blow up thing where kids stood on these foam rounds, and this pole would swing around, and you have to jump over it as it swung under you. It was pretty entertaining to watch... some kids got hit in the face. I was kind of concerned about one boy, he got wacked in the face pretty good, and he wouldn't get up for a little while. He finally did, and I was hoping he was alright. 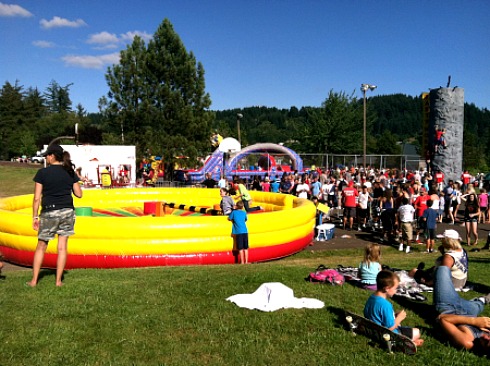 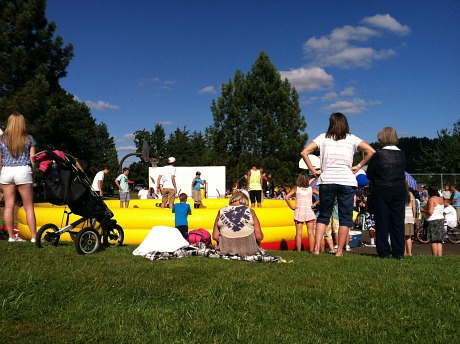 Happy Valley park was packed! There were tons of people there. Tara and I laughed to ourselves about the girls with their boyfriends, who think they are so cool. We laughed at how we envied those kind of girls when we were younger, and now (probably older than those girls) we think it's silly, pointless, and a little immature.
I wanted to go back to the car to drop off a bag, so we went the "scenic route". It's just a pathway made of wood, and it goes through a "foresty" area, with a little creek. When I was younger, I loved walking on that little pathway. It was still adventurous for us yesterday.
We walked out of the tree area, and walked past a field, the field next door was the field that they set up the fireworks for the Happy Valley fireworks display. I have always wondered where they set it up, and now I know. 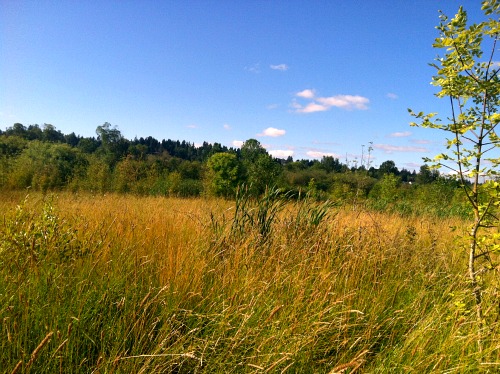 This is where they set up the fireworks. It is right behind the Happy Valley preschool. 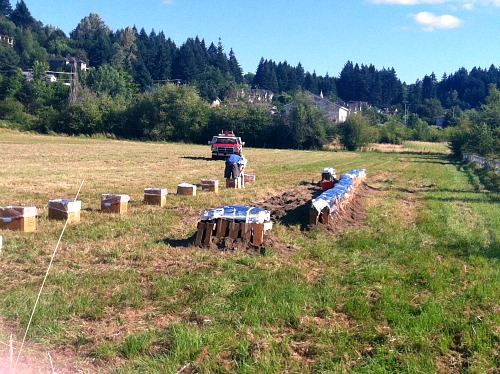 There was a white, wooden fence, and I wanted to practice my photography skills again. I take pictures for blogging now-a-days, and not so much for photography. I need to get into that again... 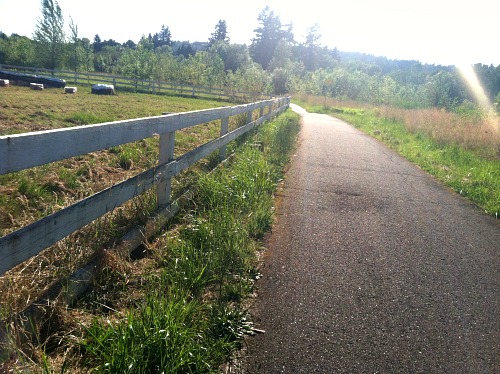 Tara and I by the field. 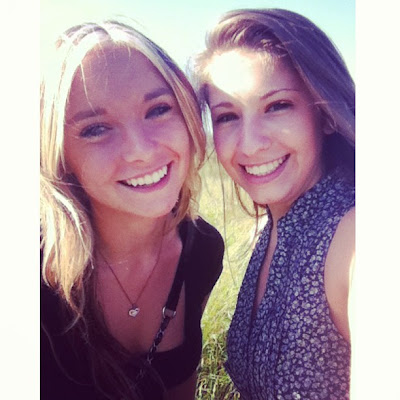 We did a loop-around, and walked by the preschool, and up around by the elementary school where I parked. We dropped off the bag, and went back to the park, by way of the wooden walk-way. It's nice because it's shaded from all the trees, and it's a nice little activity.
I spotted a lilac that had fallen and been flattened by countless shoes.
It looked picturesque, so I practiced my photography skills again. 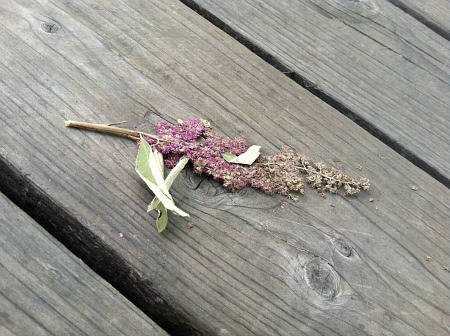 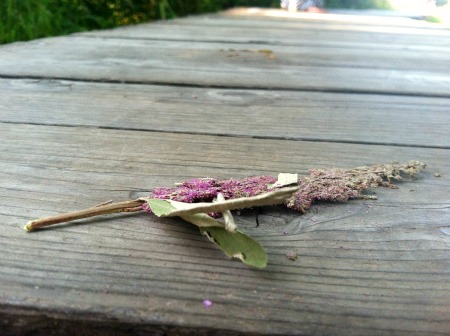 Our legs were hurting a bit, because we wore those flat, strappy sandals, that have no support what so ever.
We walked out of the tree area, and spotted a bench to sit down at. We checked our phones, and then continued walking again. I could not believe how many people were there at Happy Valley park! It was insane!
We decided to go check out the activities again. We wanted to watch the jumping activity again. It was pretty entertaining. A couple kids were smacked in the face with the pole, some tripped over the pole and fell, some lost their balance. Tara and I kept betting on which one would fall, and which one would stay up. We were right most of the time.
We decided to walk back to the car again, so we walked by the tents that sold insurance and such. I spotted this vintage bus, and thought it was just darling! It was the first-aid unit set up there, and it was painted red, with a little peace sign painted on the front. I couldn't get too close to it, but I tried to get a good picture. I love vintage finds. 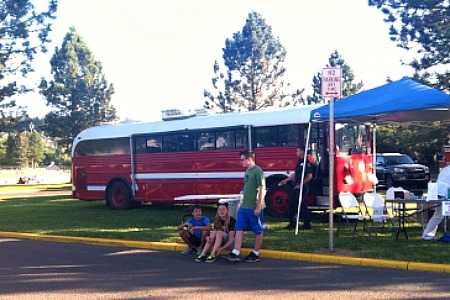 We walked to the car, and drove back to Tara's house. It's an easy drive.
After that, I went home to rest for a couple hours. I was supposed to drive back out to Clackamas to meet up with my parents, so that we could go watch fireworks together. I knew I had bowls to clean in the sink, so when I got home, I did the dishes and listened to country music. It was kind of nice. I had the house to myself, and I was just having a nice time, doing the dishes, listening to country music, and fireworks in the background. My dad bought me sparklers, so I lit a couple just for fun. 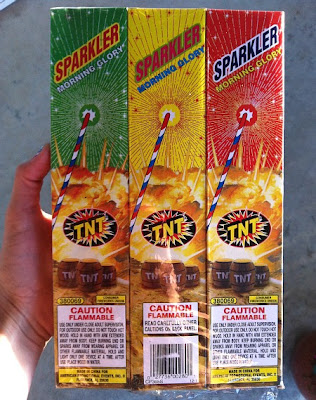 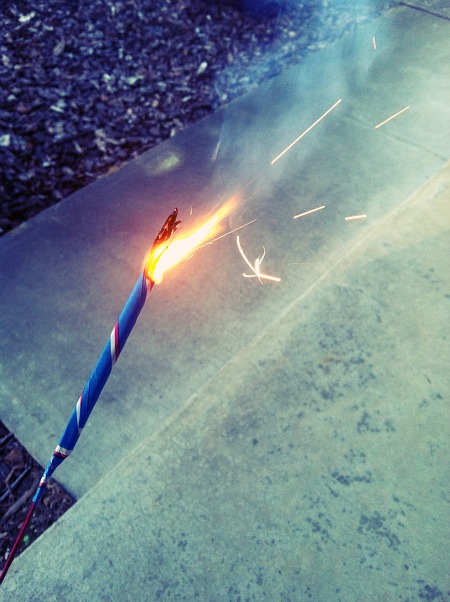 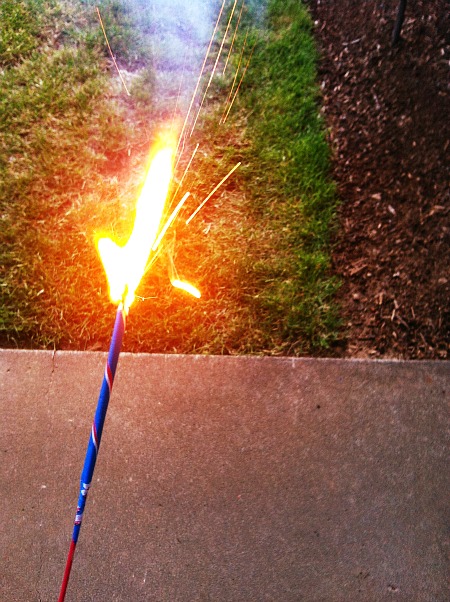 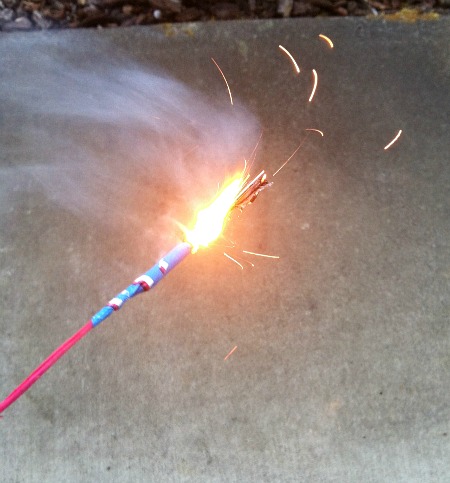 I never got a chance to have my picture taken of my outfit, so I did it myself. I dressed in my light red, and white, striped shorts from Aerie, and my navy blue blouse with little white flowers on it. 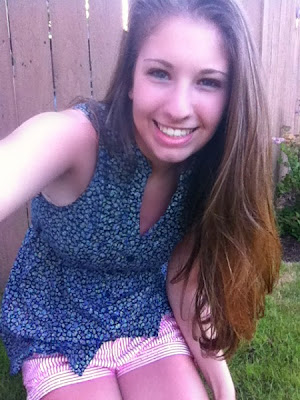 I didn't even mean to take this picture... but I thought it would give you a close-up of the fabric, and also, it's kind of a cool picture. 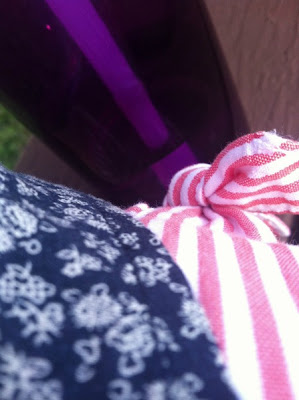 And then I changed into my denim shorts with my Yale t-shirt, and some red lipstick. I wanted to be comfy while I watched fireworks. 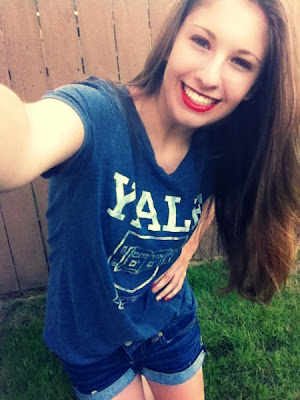 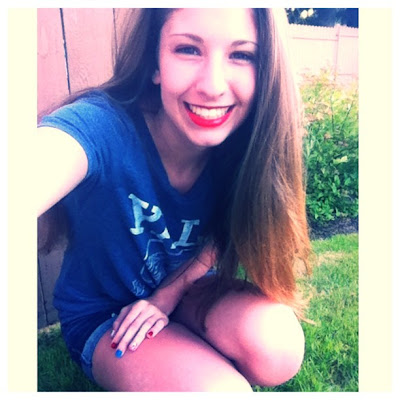 I drove out to Clackamas again, where my parents were. We drove out to a view point where you can see basically all of the upper half of Oregon. We saw fireworks going off all the way over the Columbia river into Washington. I wish my camera could capture it clearly, but unfortunately, it didn't reach that far.
I did capture some fireworks that were being shot off at Oaks Park, that is near the Willamette river. A funny thing about the Willamette river. I can tell if you aren't from Portland if you call the Willamette river the "Will-uh-mitt" river. It is pronounced "Will-lam-itt" river.
It's funny to me.
I discovered that while watching Portlandia, and I have heard it other places too, but it was funnier on Portlandia.
Here is another sunset picture. It was really pretty. 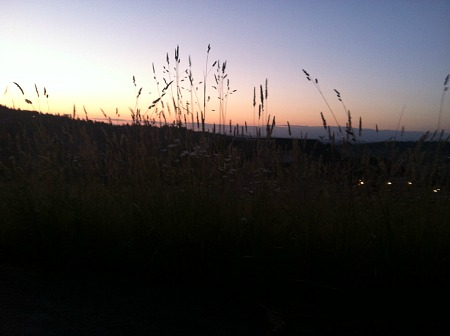 There were these kids who were sitting probably 12 feet from us, and they were shooting off huge fireworks. I'm glad I captures some fireworks that were close by.
I captured the fireworks from a far pretty well too. It was a nice fireworks show. 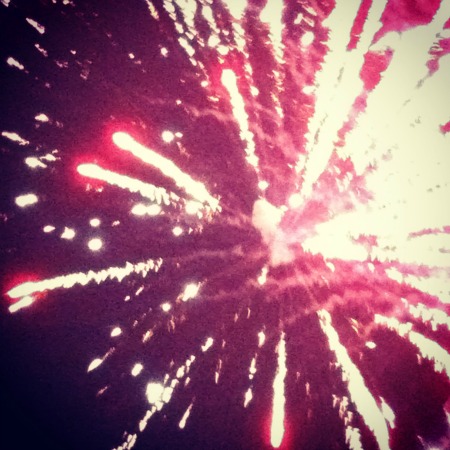 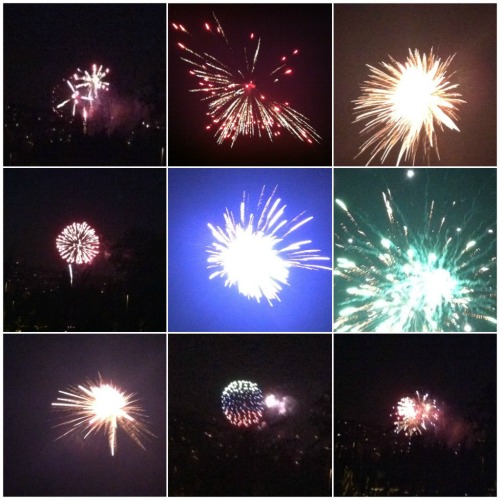 When I got home, my legs hurt. It's my own fault for walking a long distance in shoes that don't support your feet.
All in all, it was a pretty nice Fourth of July.
I am proud to be an American.
Labels: Aerie America best friend cupcakes fire fireworks Fourth of July Happy Birthday Happy Valley nail art red lipstick red white blue