I was inspired to make homemade chicken nuggets after flipping through a how-to photo guide on Snapguide. This woman made it looks so easy to make chicken nuggets! I have dealt with raw chicken many times, making chicken strips and buffalo chicken legs, and grilling chicken for various things, but I am always grossed out by it. I had to basically bleach the whole kitchen after dealing with the raw chicken. It wasn't as bad as I thought it was going to be, but I felt way safer after I used bleach to clean the kitchen, and counters.  It was super easy, the whole process. It took way longer because I made fries as well, with yams and sweet potatoes. I already did a homemade fries recipe on here, so you can visit the link if you'd like. 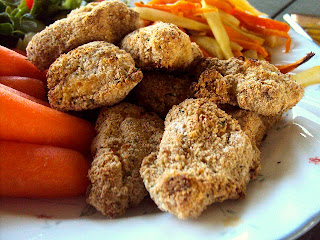 Here is what you will need:
~Depending on how much chicken you have and want to make,
~I used 6 large chicken breast fillets.
~1 egg (Again, you may need two eggs depending on how much chicken you have. One egg was plenty for me, and I still had lots left over, but I added some almond milk to it to thin it out a bit. I always waste egg when I am done dipping the chicken, so I just used one egg, and it was plenty.)
~3 cups of bread crumbs
~1 and 1/2 cups of unbleached flour
~Tin foil and cooking spray


If you used frozen chicken, thaw it out before you cut it up.
First step, preheat the oven to 450 degrees (hot! hot! hot!)
Next, cut up the chicken into 'nugget' shaped pieces. If you want to get artsy, you can make them into mickey mouse heads, or dinosaurs, whatever comes to mind. I just cut them up regular. 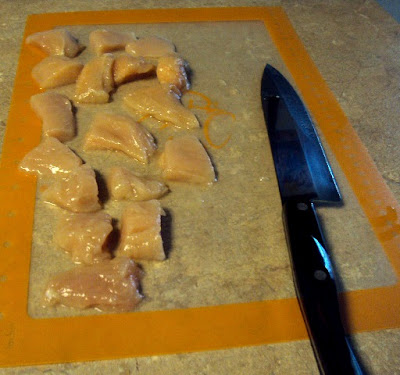 Before you start coating the chicken, prepare a pan to put the chicken on after it is coated. I always cover my pans with tin foil, {because I am lazy, and don't want to clean the pans after} and olive oil. So cover a pan with tin foil and spray cooking spray on top, or swipe it with olive oil/coconut oil.
Next, prepare the egg mixture. Like I said, I poured a little bit of almond milk in the egg. It thins it out just a little bit so the egg isn't so thick. Prepare a bowl for the flour, and bread crumbs in separate bowls. 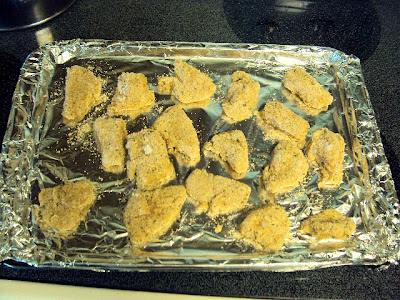 Next, put the chicken nuggets in the oven for 12 minutes. 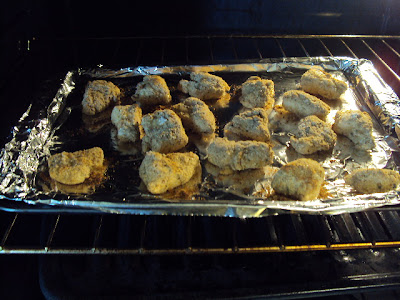 While the chicken nuggets were baking, I finished up the french fries. Preparing them for the oven and cleaning up after the chicken. It took me a while to actually feel safe in the kitchen. I felt like everything was contaminated, like I might not have washed my hands if I wanted to touch something else, therefore, transferring raw chicken bacteria anywhere. I took care of it all. I don't normally like to use harsh chemicals when cleaning, but this called for heavy duty.

When the chicken was all done, I put the fries in and cleaned up the rest of the mess. I hate being in a messy kitchen, I can't function! For the last three minutes that the fries were baking, I put the chicken back in to reheat.
The chicken and the fries turned out super delicious! I knew the fries would since I have made them before, but the chicken nuggets were amazing! 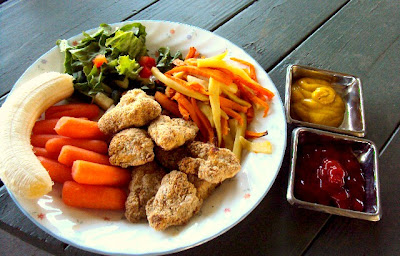 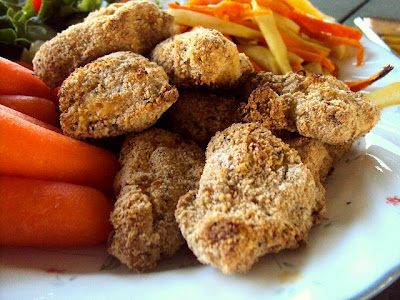 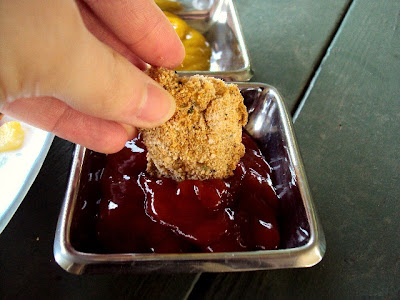 It was a super yummy lunch yesterday, and I ate while watching "Call the Midwife", a series brought on by the BBC (I love the British Broadcasting Corporation!). I will be doing a {fabulous} review of the series today. This series had me on the edge of my seat and had me smiling so big. It's what I want to be someday, a midwife! {And homemaker, mother, neonatal nurse, blogger, wife, etc.}
I hope you enjoyed the easy chicken nuggets recipe.
They are super yum!
Labels: baked chicken Baking breaded chicken chicken chicken nuggets easy baking easy chicken nuggets healthy baking healthy recipe homemade recipe