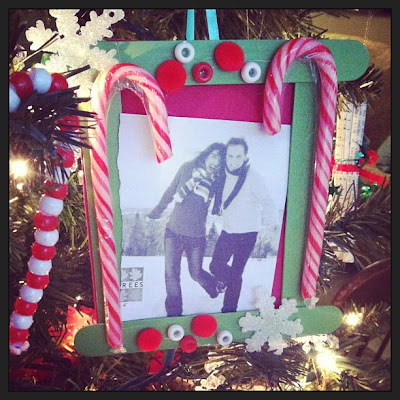 I was proud of my Christmas Junk picture frame. I might use it next year. The picture in the frame is nothing but a sample picture that was in another picture frame. It is a little lop sided... but it works! It is just an example of how it is supposed to look.
Then we opened presents from my mom. We got some cool stuff! Again, my stuff was stuck in the mail and I am getting money for shopping later. My best friend and I are going back to Northwest Portland and we are going to go on a mini shopping spree!
After presents, we were trying to gather to watch the cartoon Christmas Carol, it is also a family tradition. I had to pester my dad to make pancakes. My family isn't big on Christmas breakfasts. I had to improvise. 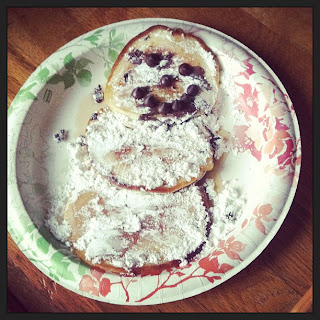 After watching The Christmas Carol and eating breakfast, we got ready to go to my grandma's house on my dad's side of the family. I was really looking forward to it because this year, instead of having lasagna or potato brunch, or ham, we had MEXICAN FOOD! Mexican food is one of my favorite cultural foods. Not the lame taco ball crap, but the homemade, almost-authentic Mexican food!
When we got there, we said our 'hellos' and sat down.  I asked about our stockings. Grandma Biggs always does stockings and I was so excited. I had a feeling of what might be in there. My grandma pointed to the bricks and said, "Right there. Those baggies." I thought she was kidding at first, and to be honest I was a little disappointed. Not that Christmas is about gifts, especially since the tree was over flowing with presents... 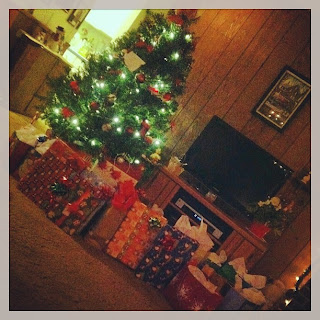 ...but she always does stockings.
Ever since I can remember. The little baggy was clever though, clever and cute. 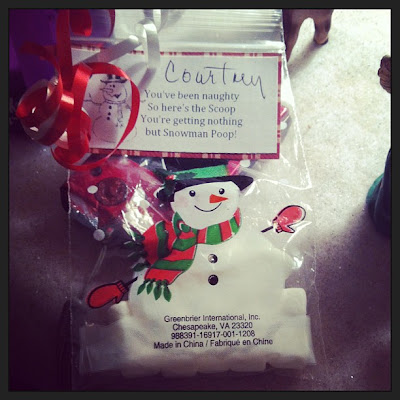 It says: "You've been naughty, so here's the scoop, You're getting nothing but snowman poop!" and it was a bag of marshmallows. How cleverly cute! Then my Grandma brought out the stockings. I knew she had stockings. I had my doubts at first, but I was sure she had stockings. I reached my hand in there, and felt what I needed to felt. EOS Alice in Wonderland Set of 3 lip balms, in the flavors of Blueberry, Vanilla and Watermelon. I had been wanting this for so long! 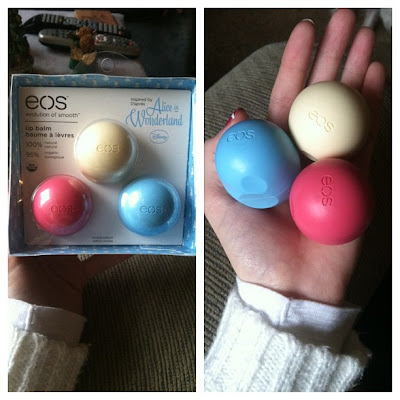 The Vanilla one is my favorite so far. I am going to do a review on the EOS. I have a huge collection of them now. I still have some from a year and a half ago. THEY LAST FOREVER! Unless you use it non stop like I do... but still! They last forever... or they last more than a year.
I got some other cool stuff in my stocking. More lip gloss, some candy, some nail polish remover pads and other stuff. Little stocking stuffers.
Getting the EOS totally made my day. Immediately I started using the watermelon one, the blueberry one, and the vanilla one. I used them all day long! I was so stoked about the three pack!
After stockings, we ate. The table looked awesome! FULL OF FOOD! 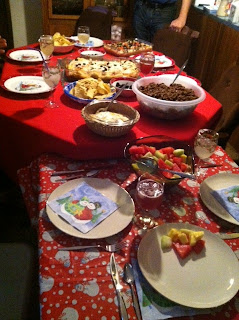 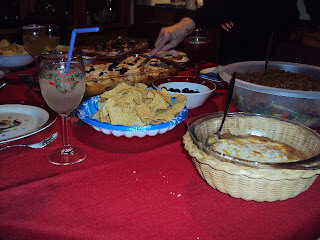 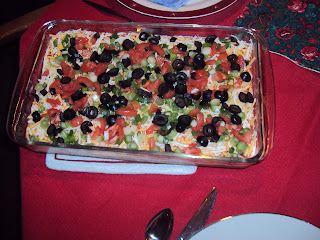 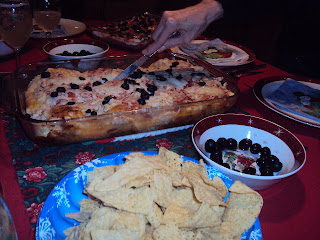 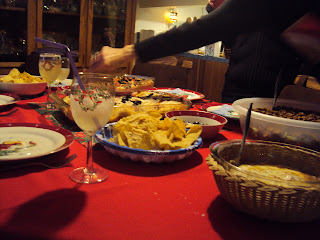 Lots of pictures of the food... but I wanted to get it all!
The worry that I had was that I wasn't going to be able to fit all of my food on my plate.
I asked for another plate, because I was worried all my food wouldn't fit on it. But my mom said to just get small portions of everything. I did, and it all fit on there!
I was really happy. 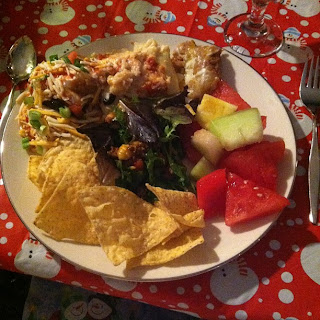 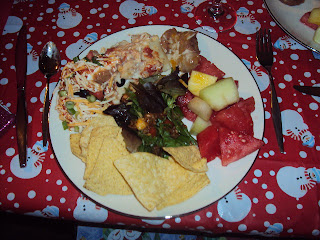 So delicious! It was all really really good.
After dinner, we all migrated to the living room and started opening presents. Of course, my present to everybody were the cookies... I took a picture prior and of course, Punky does amazing photo-bombs. 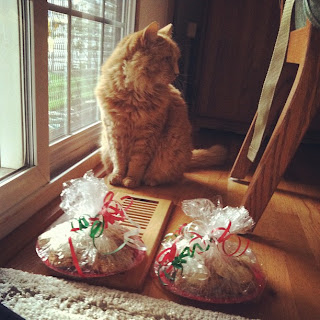 My aunt and uncle brought their dog, Archie. It was fun having him around this Christmas. For present time, he hopped up on Aimee's lap, and his eyes started getting really heavy. It was so cute. 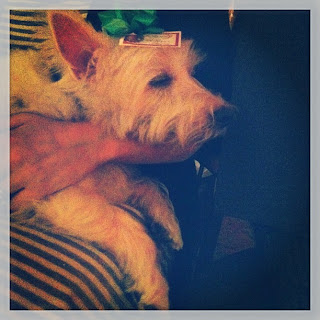 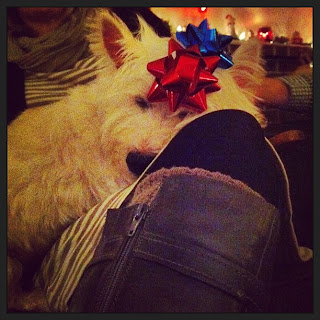 My uncle Randy kept putting the present bows on his head. It added a nice touch. Archie is such a cutie!
I was so excited! I got a picture of him winking! 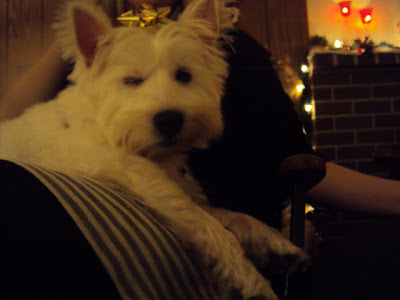 At the Biggses, we go in rounds of present opening. We sit in a circle, and go around the circle and open presents. I was really excited. I got everything I wanted! A Columbia wind breaker, a New Seasons Gift card, some knit socks, and more! An anatomy book (since I am in CAL), some foot scrubby lotion, Subway gift card and some money, a really nice knit scarf; and some other stuff. It was a really good Christmas!
Again! It's not about the gifts... but I still like presents! Who doesn't?! 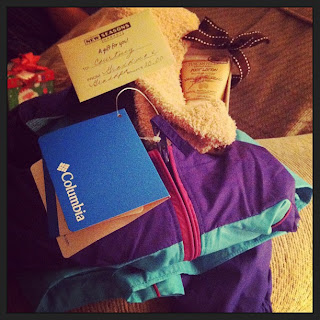 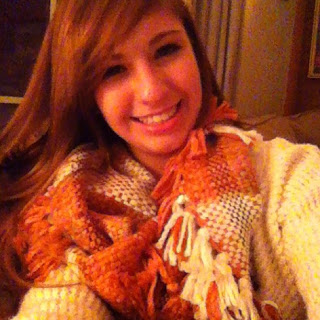 After presents, we had our dessert. My mom made this amazing chocolate bundt cake. I gave her the idea to crush up and sprinkle candy cane on the cake, to make it Christmasy. It was delectable! The chocolate glaze on top really sealed it. It was so good! My mom will definitely have to make that again... or I will make it and put it on the blog. 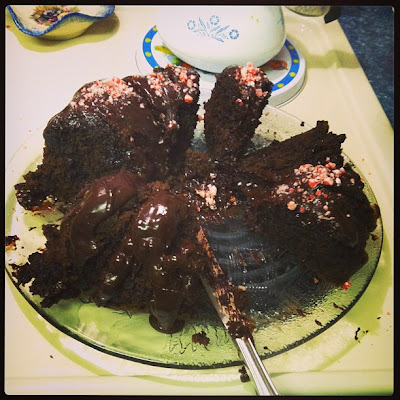 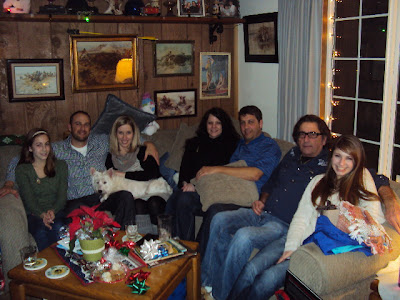 I don't know why we didn't just put it on timer... oh well. It was easier this way.
After Randy and Aimee left, my mom; sister; dad; and grandma went up to the table and played Spades. My grandpa and I were talking about college and where I want to live after high school.
It was relaxing and very nice.
Of course I have a picture of myself relaxing... but you can only see my feet and my grandpa's feet. 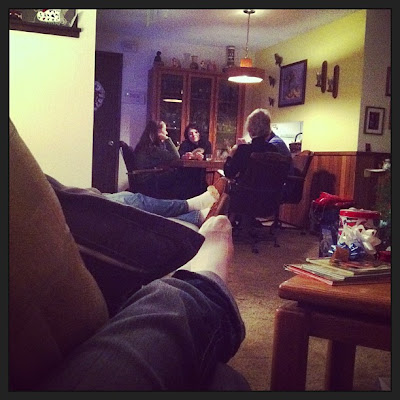 Christmas day was a really good day! When we got home, I snuggled with the greatest gift of all, my kitty.
Punky, the real Garfield, who hopped up on the chair and ruled all... even though I was trying to eat.
Goodness, he comes at the most inconvenient times. 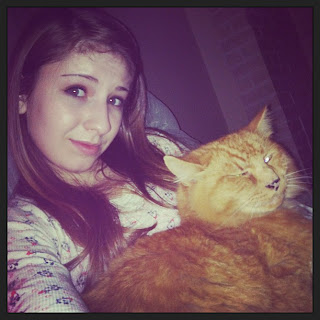