Sorry I haven't blogged in a little bit. Every night that we stayed in a hotel, my dad wanted to watch Netflix on the lap top. So, I am blogging now. So, on day 4 of the trip, our last day at the Green Valley Ranch, very lovely resort, Brittney and I packed up everything so that when my parents got back from their meeting, we could just pack up the car and go. We did that and got the car all packed up. After that, we went over to the hotel buffet, and literally stood there for an hour and a half probably, and when we finally got up to the cashier to pay for the food up front, we realized it was Sunday, and it costs more because of Sunday. It was going to cost like $54 just for all four of us to eat. (My mom, my dad, my sister and I). So, we wanted to eat somewhere else. We got in the car, and drove to Las Vegas for some last minute sight seeing and to see some of the stuff we missed. We went and saw the 'Welcome to Fabulous Las Vegas, Nevada' sign and got our pictures taken with it. 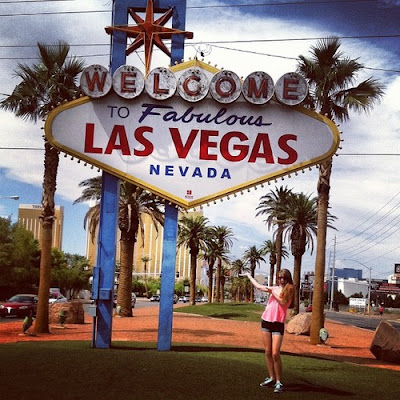 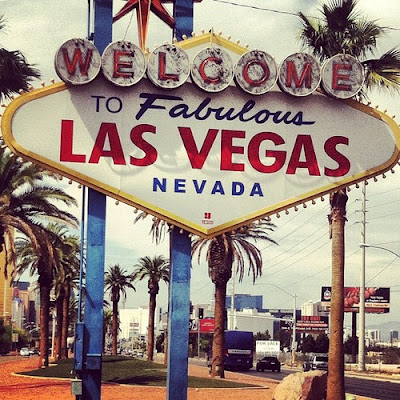 We drove further into the city and then my dad dropped my mom, my sister and I off at MGM, so he could go find parking. We walked into MGM, and we walked walked walked, until we asked someone, "Which way is the lobby?", we asked this Asian lady and she was passing out these coupons of 'watch a free show, get a free starbucks' and she had her accent, really thick when she was passing out the coupons. But when we asked her where the lobby was, she sounded normal, like no accent at all... hmmm... we all kinda laughed at that. It was pretty funny. And after she answered our question normally, she went back to passing out coupon pass things with her accent. It was hilarious. We found the lobby. No lions. Hmmm... we looked around and couldn't find the lions, the real lions in MGM casino and hotel. They were no where! We finally asked a hotel worker and he said, "Unfortunately, we don't have the lions anymore." ......... WHAT!? SERIOUSLY? We then had wasted about 2 hours of precious time. We said thank you and that we were disappointed. We left the hotel and walked to Coca-Cola world. I wasn't disappointed there! When I first walked in, I saw these Coca-Cola glasses and they were cheap! Like, not cheap glass, but the price was cheap. I got a big $3.00 Coca-Cola glass to drink out of. That's not the only thing though... I also got some Coca-Cola Cherry lip gloss, and 2 old fashioned Coca-Cola bottles with some Cola in them. The real Coca-Cola with the real sugar! yummmmmm.
We also got our pictures taken with the adorable Coca-Cola bear. Whoever designed the costume of the bear did a fantastic job. The 'bear's' mannerisms were so cute! It blinked and opened it's mouth. The person inside the costume did really well. It was so cute!
And the bear bit my head! It actually hurt! ha.
It was cute! 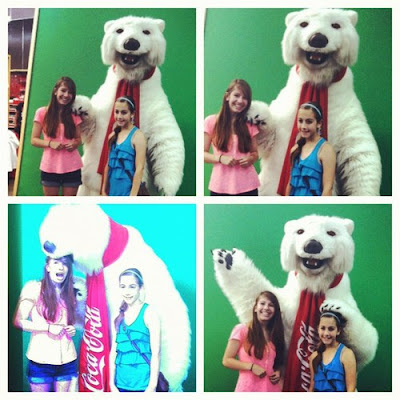 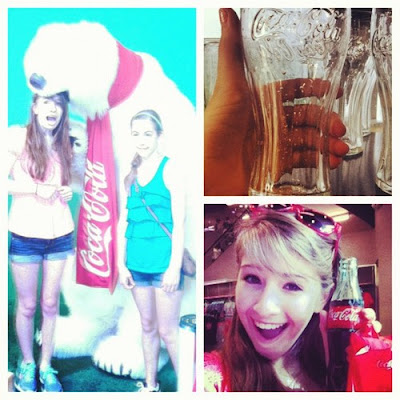 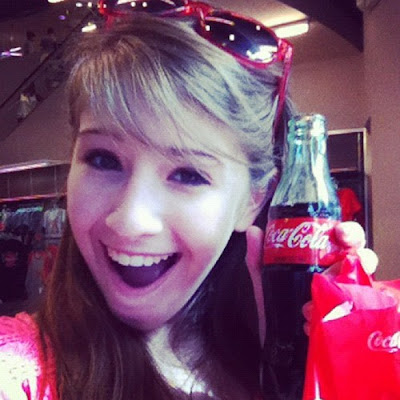 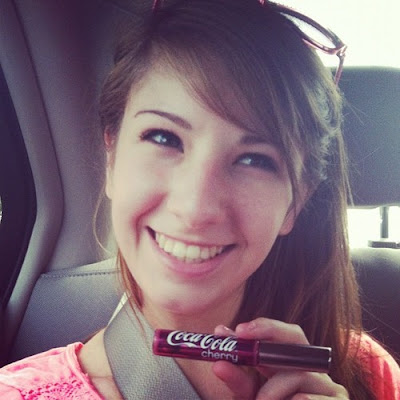 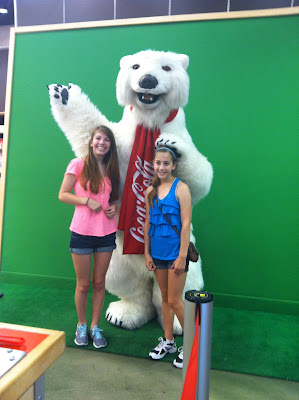 OH!! SOooo cute!! That was our last stop, so we got in the car after Coca-Cola world and the stuff we were going to see, people said that those places weren't very cool. We wouldn't of had time to do that anyway.
We got in the car and we drove down the Las Vegas strip, and we drove into the old part of Las Vegas. With all the wedding chapels, and kind of run down buildings. I got pictures of the wedding chapels. Ha, they were everywhere! Even more than the 6 I got pictures of. In every hotel/casino, there is a wedding chapel, even on the main strip now-a-days. 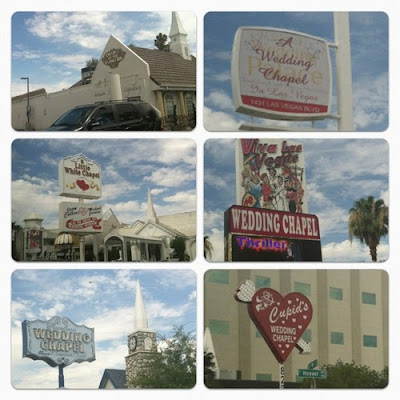 Cracks me up. We were then driving around, and looking for places to eat. At first, we were going to get Chinese food, but then we saw El Pollo Loco, and we decided to go there and we made the right decision! The food was super delicious! I give El Pollo Loco two thumbs up!
I recommend the stuffed quesadillas. Mmmmm, that is what I got. I got the bacon chicken one, delicious. 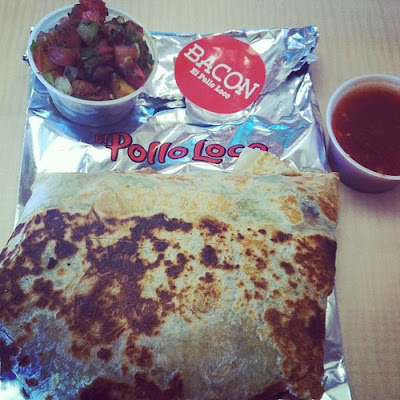 But while we were waiting for our food, this scraggly guy came in with a pack of cigarettes and came up to my mom and I and said, "Hey, do you have any cash on you, so I can eat too?" , We were kind of taken aback by him and said, "No, we don't have any cash to spare." Because we didn't, we had to cash for other things, like our frivolous shopping. That sounds really bad... but he had cigarettes, so he must not have been hurting that bad... and he could have spent his money on food rather than cigarettes. So, we went around to all the other tables and asked. My sister ordered by herself because she wasn't with us while the rest of the family ordered, but when she came back and ordered her thing, the guy came up to her and asked her. How creepy for her. I mean, it was creepy for us too. Finally, the guy left the building and left everybody else alone. Jeez, I mean, maybe he was really hungry and he figured that was a good way to get some money, but if we wanted to get some cash, he should have hid his cigarettes and not be so pushy about giving him our cash. He left the building empty handed, you never know when it is real or not, which is so sad, because some people might actually need money, or some people might just be fakes and they drive expensive cars but dress up as homeless people just to get more money to fill that SUV. Sad.
Anyway.... the food was great! I give El Pollo Loco two thumbs up, like I said before. It was fantastic. El Pollo Loco is also quality fast food, although, you have to wait for your food for a little bit, so that means they are putting quality into your food. I like that.
When we were done eating, we went to the bathroom and left the building and got in the car. Off to Arizona! Before we crossed the Arizona/Nevada border, we came across this sign for rams. Now... in Oregon we have a 'deer' crossing sign. In Nevada and Arizona, they have a 'ram' crossing sign. It was great. 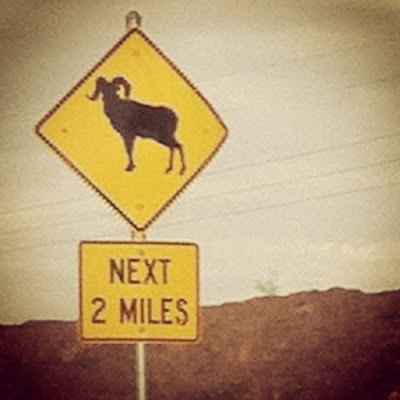 Oh hilarious! A few miles after the ram sign, we came upon the Arizona/Nevada border and the Arizona welcome sign. We had entered a new state that I have never been in before and I can finally say that I have been to Nevada and Arizona! 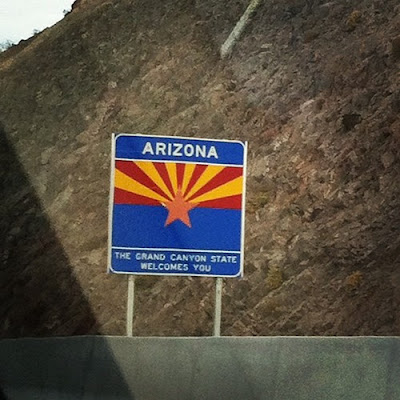 So glad I got the welcome signs. We drove and drove. The flat but mountainous area was gorgeous and the clouds were congregating all into the spot we were. It was gorgeous! So gorgeous and pretty. 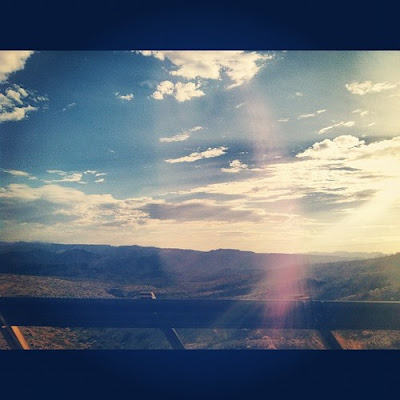 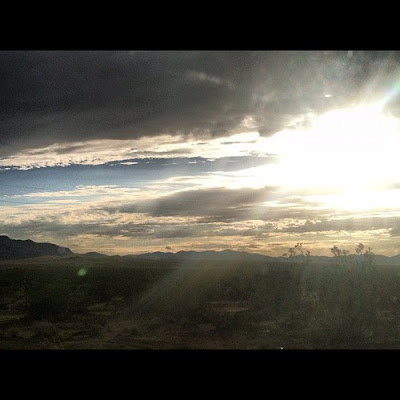 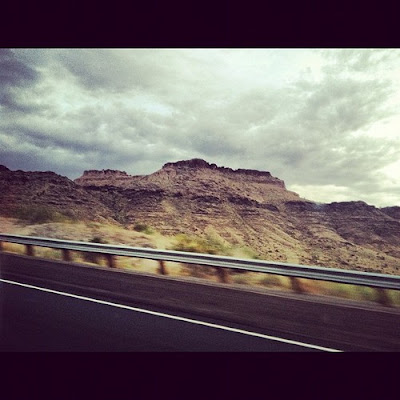 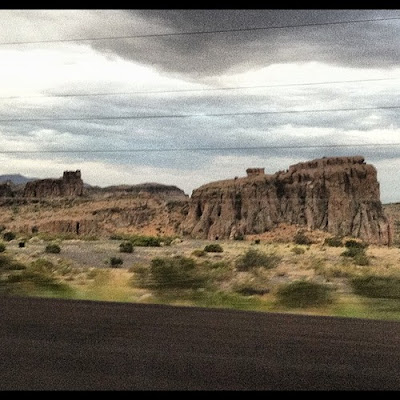 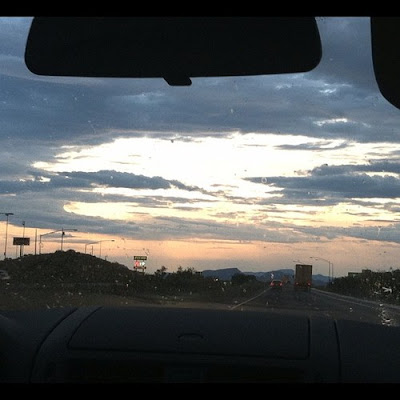 It also started to rain, and I hadn't seen rain in days! It was great to see rain. And we also saw some lightning too. It was magical. The clouds formed themselves into a beautiful, colorful sunset!
We stopped at a truck stop and restaurant called 'Iron Skillet'. There, the sunset was beautiful. On both sides!
I had to take so many pictures of it and I had to get my picture taken with the beautiful sunset.
Don't mind the random guy in the background... he was talking on his head set, but at first, we didn't know he had a head set and thought he was just babbling on and on to himself. He was talking into his headset to somebody on the other side. We felt better about me going over near him to get my picture with the sunset. 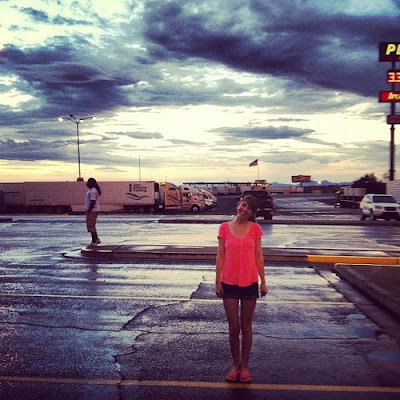 And then me on the other side of the parking lot...
The colors and the sun mixed together, it was so pretty. 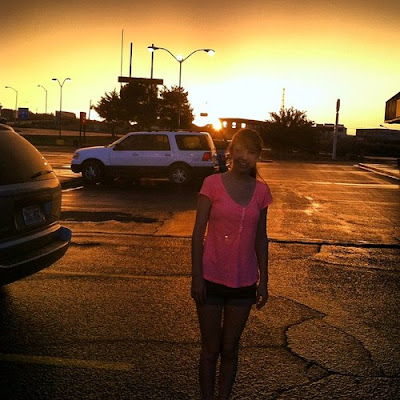 These are not edited....
This is the real, and actual color that the sky was on Sunday night, 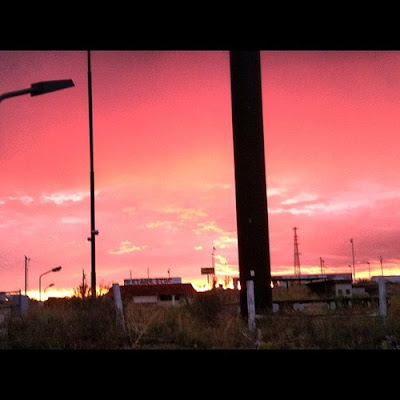 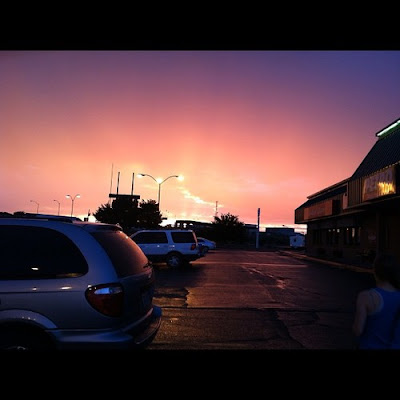 All I did to this one was just enhance it. I darkened the colors and added a few filters. This is basically the color too, that the sky was, I just darkened it and enhanced it a little.
It looked cool, so I instagramed it. 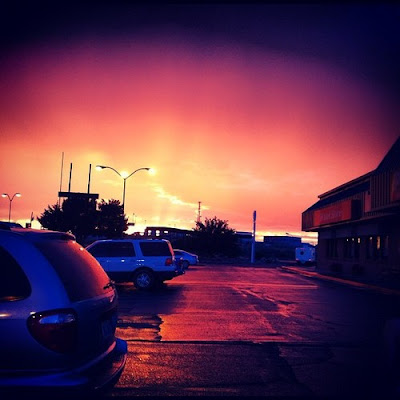 We all made our stops at the truck stop, and we got back in the car, and up the street a little ways, there was a road sign that said how many miles to the nearest cities, we got a picture of that because how often do you get to take a picture of a road sign with Arizona, California and Nevada cities on it... when you live in Oregon. ha. 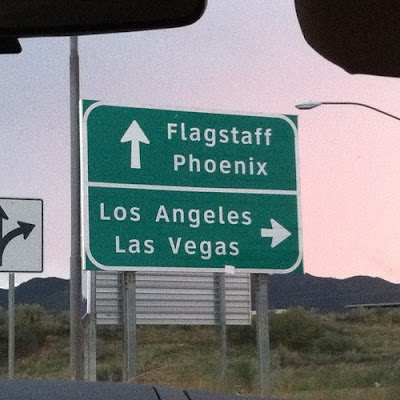 We drove a ways, a long time and we finally got onto Route 66 in the little town of Williams, Arizona. Our motel was ok looking... it was someplace to stay for one night. I did take pictures of the place... going from a 5 star resort to probably 2 and 1/2 stars... it was a big down grade. I accidentally deleted the pictures. I really wanted to show you what the room was like, since I showed you the five star hotel room, and I wanted to show you the 2 1/2 star room. It was a laugh. It's called, 'Route 66 Motel' and the beds were low and there was no hair dryer, but there was a microwave!
ha.
We got all ready and my dad took a little walk and while we was taking a walk, mom, brittney and I watched an 80's game show called, "The $25,000 Pyramid." It was very interesting!
I had a fun day 4 of the trip and it was a lot of fun!
Labels: Arizona cloud pics clouds Coca-Cola El Pollo Loco GVR Hills Las Vegas lip gloss motels mountains Nevada rams rocky hills Route 66 shopping soda Sunsets wedding chapels