Every once in a while, I will get this mind set where I have to do something off of WeHeartIt.com or Pinterest. Mostly WeHeartIt or Tumblr. But, I have been collecting great ideas, and making up some of my own. I wanted to post them a couple days ago, but I didn't get all that I wanted done. Yesterday, I completed most of what I wanted, but I am saving the other stuff, and boy, there are lots of other cute creative things to do, but I am saving the other stuff for another day.

I love Nutella. I don't know why... but I love Nutella. It's sweet, and yummy. It's just wonderful.
I saw this adorable cute idea on WeHeartIt. Only, they didn't use Nutella on the bread, I think they used cream cheese, or something.
But I used Nutella and cut up the strawberries into hearts. 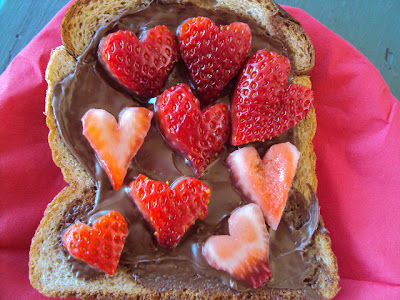 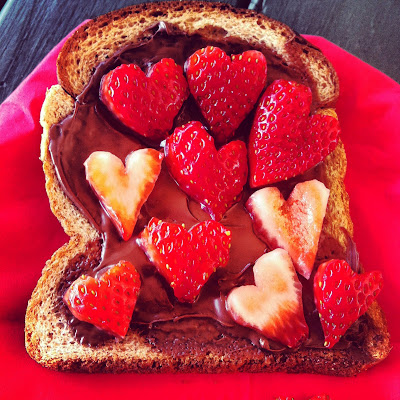 It was pretty yummy too! But I'd dry the strawberries off completely. They made the nutella a little watery...
They were kinda sliding all around on the bread...
but it was yummy!
Nutella and Mustaches seem to be very popular on WeHeartIt and Tumblr. I decided to make a nutella-stache. 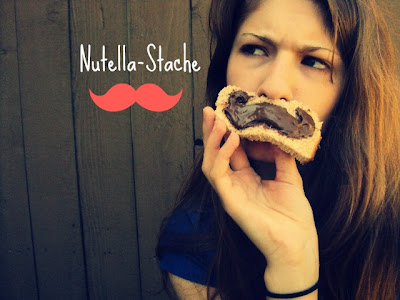 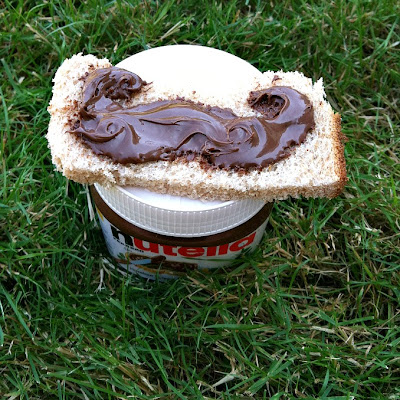 I kinda messed up, but it is in the shape of a mustache. It's kind of hard constructing anything but a slab out of nutella, like spreading it on a piece of bread. I think I did pretty good. It tasted pretty good too. :)
Nutella is one of the only reasons to buy bread.
In my opinion.
I get so many inspirational ideas from those sites, I love trying new, unique things. I don't know why people do this, I guess it just looks cool, but I have seen lots of pictures like this. And they are cool. I need a new camera, one that takes extra good pictures. I NEED ONE. Mine does pretty good, but I need a new one because my camera didn't capture the glitter like I wanted it to.
My pictures are edited so you can see the glitter better, but they look cool edited!
And no, my finger tips are not stained with blueberries or blackberries, it is how I edited it. 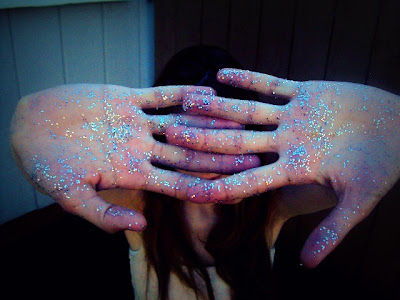 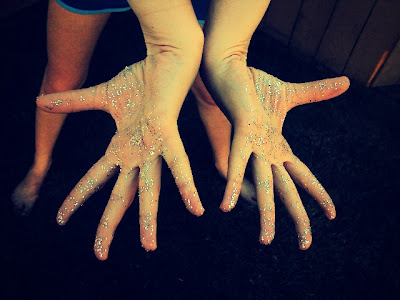 I love pictures of bubbles, like when the bubbles hit the sun just right and it reflects. That is so pretty and so cute. I tried it and I think I did pretty good. I did all of this by myself, blew the bubbles, took the pictures and edited them. 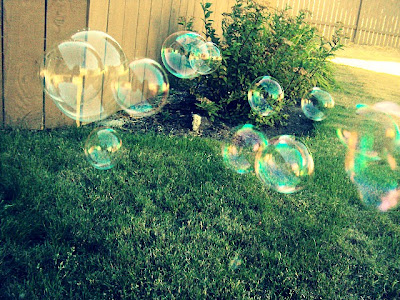 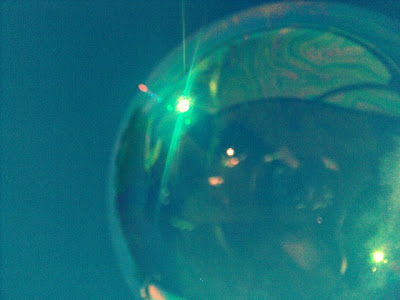 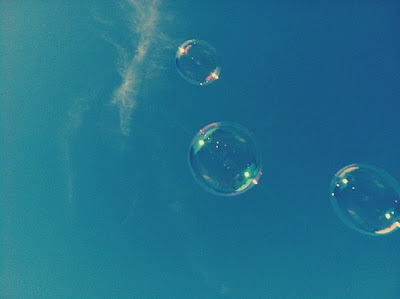 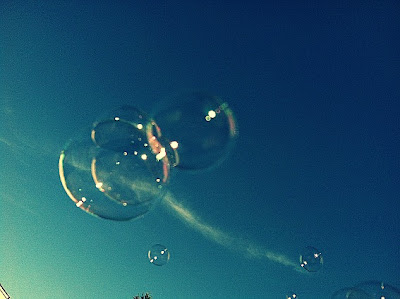 I tried to get one with Punky in it, but he was being a stinker and wouldn't stay there.
I love the pictures none the less.
They are pretty darn cool :)
In my eyes, don't know about my reader's eyes. You all might think, "Ah, whatever." :(
That's your opinion though.
I also see these a lot on WeHeartIt and Pinterest and Tumblr, they are getting to be popular and girly.
ANCHORS.
Lots of girls have anchors on their iPhone cases, or Anchors on their shirts or Anchors on their body or jewelry. Anchors everywhere. Well, I got out my trusty sharpie, and drew anchors on my wrist and ankle.
They turned out perfect! 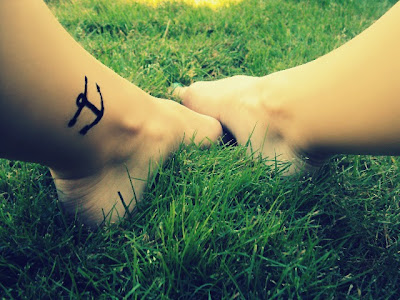 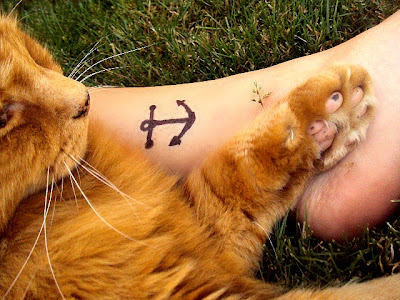 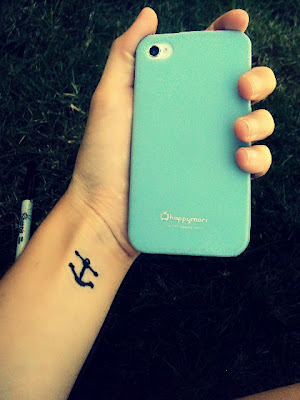 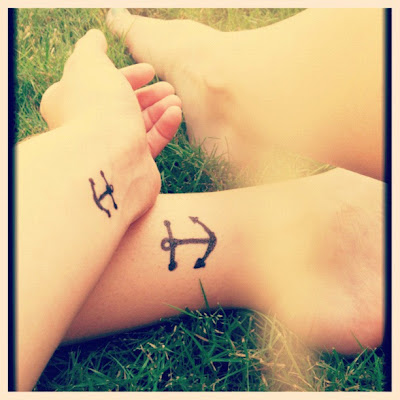 Anchors are adorable.
I want an Anchor iPhone case and a Mustache iPhone case. I am getting a little obsessed with both.
It's like hot air balloons and elephants. I am obsessed with a lot of cute things.
I wanted to do something cute with nails. Like cute nail art. I tried doing mustaches on my nails, but it turned out in mess and mess up. So, I did a bunch of weird things on my nails in all different colors. They look pretty cool. Brittney kept saying they looked messed up, and that other people would say that too. But I got compliments from my tumblr friends and from other people that I sent the picture to, they all said that I had adorable or cute nails. One said, "Freakin' cute nails!" Ha.
I think they are 'Freakin' cute nails. 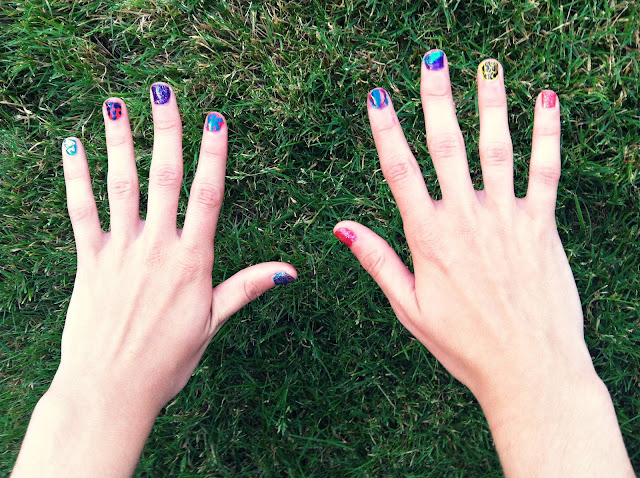 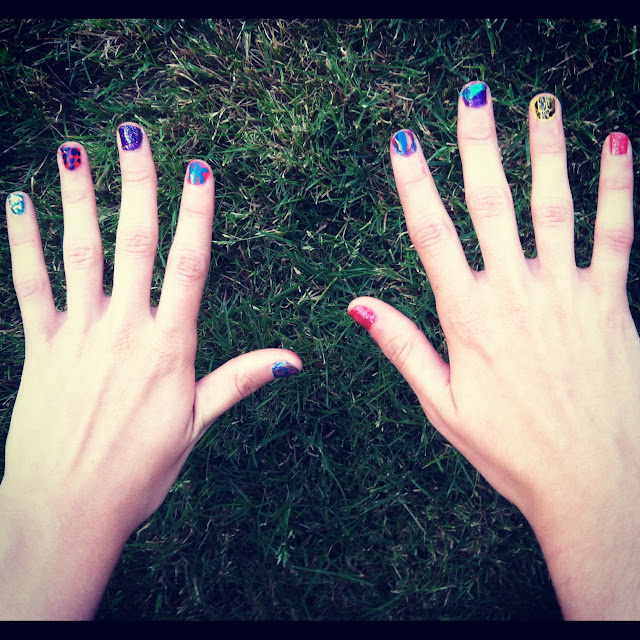 I did extra large photos so you can see the details on my nails. I love all different patterns and colors. I am eccentric, but not too weird. I like color. And when you can't go crazy on the walls, go crazy on your nails.
:)
I like being inspired by new pictures and new ways to do things. It makes like colorful and fun. I love when life is fun and colorful. It makes me happy. I have been really happy the past month. There have been sad moments, yes, but mostly happy.
Being inspired, or inspiring someone else puts a smile on my face. I will do another creative inspirations post soon. I promise. I have to, my mind is going to be overflowing with awesome cute things.
I wanted to blog about that because being inspired and inspiring someone else is a big part of my life.
My tumblr blog is all about inspirations.  It is called : Natural Inspirations. Or... actually.... it's called: On A Wing and Prayer, but it really is about Natural Inspirations. All there is on there is my instagram pictures. Sometimes I write on there, but not often.
My blogspot blog is the one I use most, the one I actually post and things.
I love blogging.
My personal motto: Inspire and be inspired.
I hope you enjoyed my creative post :)
Off to get ready for the crazy change of plans day.
(ugh)
Labels: anchors bubbles DIY nails edit glitter inspiration Inspire instagram iPhone4 iPhone4 case mustache nail art nail polish nutella pictures pinterest strawberries Tumblr We Heart It