I have been a fan of buffalo sauce lately. The taste is appealing, and it leaves you with fire on your tongue. The first time I tried the T.G.I. FRiDAY'S buffalo chicken bites  I couldn't believe how good they were. Ever since then, I have been curious about buffalo sauce. So, I was inspired to make my own buffalo chicken. 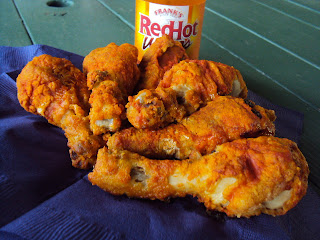 So, first of all, the ingredients:

~About 1/2 cup of Buffalo sauce. I used 'Frank's' buffalo sauce. (Or, If you are making this for a crowd, you can use like 2 cups. All you are doing with the sauce is putting it in a bowl, and rolling the chicken in it later. You don't even use the full 1/2 cup for the 6 chicken pieces that I used, but I like extra security.)
~I made 6 drumsticks, but you can always add or take away. Depending on how many people are going to be eating. It was just my sister and I, so I made us each three.
~The bread crumbs or the Krusteaz Bake and Fry stuff. The Krusteaz works better than bread crumbs. I recommend the krusteaz stuff. It's great. You probably only need 1/2 cup to a 1 cup of that.
~3 whole eggs, beaten.
~Olive Oil (optional)
~Of course the raw chicken drum sticks (which are the 6 drumsticks above)

Preheat your oven to 375 degrees before you begin.
Place a layer of tin foil on a pan, like a large cookie pan. 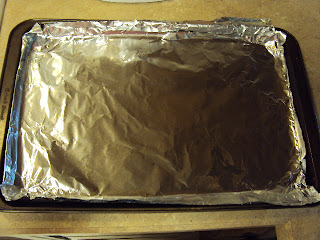 Make sure you have some Clorox Anywhere Surface bleach spray for after you deal with the raw chicken legs.
Open up the chicken legs.... 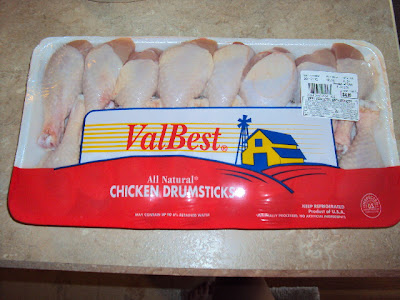 You are going to have to touch these with your bare hands, or wear latex gloves while cooking, that's your choice. Whatever satisfies you.
But touching chicken is not a big deal to me. I rinsed them off in cold water and put them in a big bowl, lined with paper towels. The reason why you want to rinse them is because they could have some blood on them and you just want to be cautious.
Just rinse them. 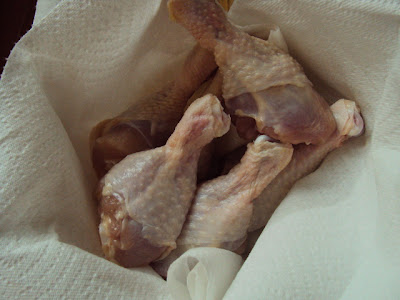 Next, you set up the assembly line. For now, wash your hands with WARM water and soap. Now, get the eggs and crumbly coating ready. You don't have to add any spices to them. You are putting buffalo sauce on them later, no need to broaden the horizon.
You crack three eggs into a bowl. Make sure the bowl is big enough for the chicken leg to lay down in. You want to coat the whole chicken leg in egg and crumbly coating. 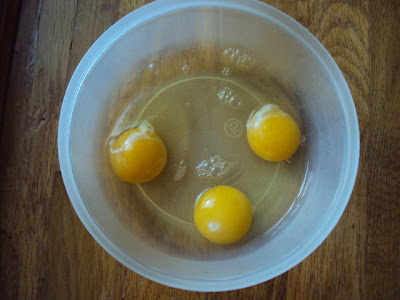 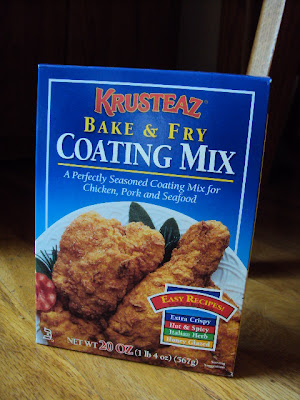 So you want to put the coating mix in a big enough bowl too.
Next, you get to work. I thought I would be using tongs for this part, but that's way too tricky. I just used my hands again.
I first dipped them into the egg, and then dipped them in the coating. 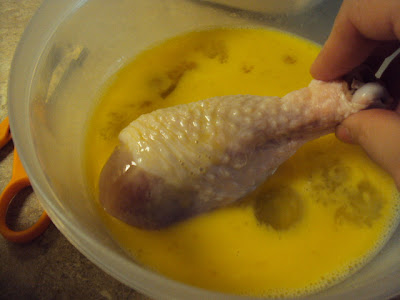 I did use thicker tongs for the coating mix,
it was easier that way. 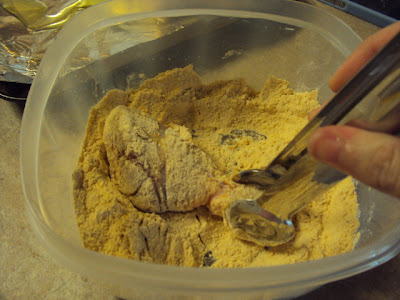 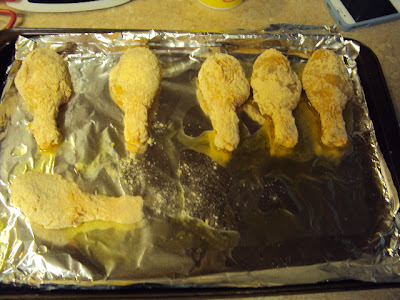 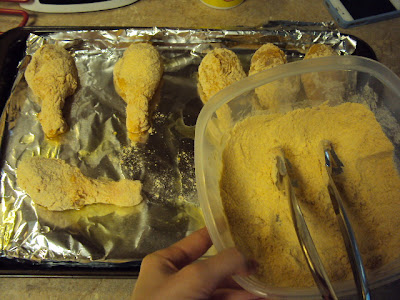 Next, you put them in the oven for 20 minutes at this time.
Now, here is where the buffalo sauce comes in. you will need a medium sized bowl, but It needs to be big enough to roll the chicken in. You will also want to chang the tin foil before baking the drumsticks again. 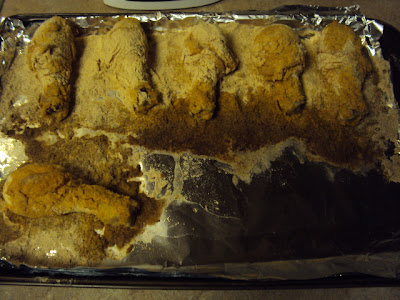 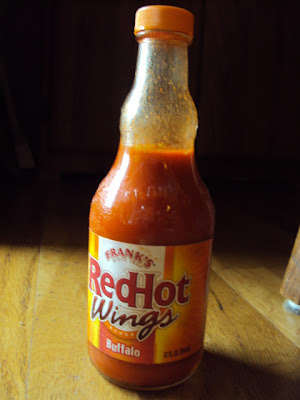 For the buffalo sauce: I just used a cereal bowl. For dipping the chicken, a cereal bowl was the easiest way to cover the whole drumstick. 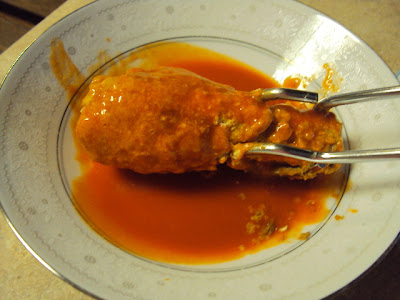 I loved how it went over the chicken so nicely. Some of the breaded coating came off, but for the most part breaded part stayed on really well. 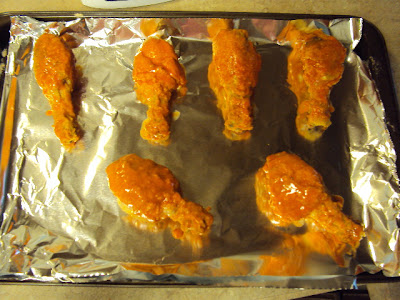 Now, you put it back in the oven for 30 minutes. When it has 15 minutes left,  you will want to turn the chicken. You don't have to, but I did. And when I turned it, some of the breading came off. Not a problem. It just stuck to the tin foil a little bit. All I did was splash a few more dashes of buffalo sauce. The parts that the breaded part came off of.
But they turned out so scrumptious. 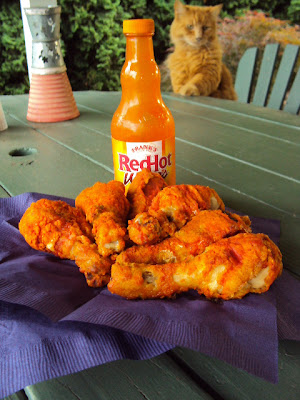 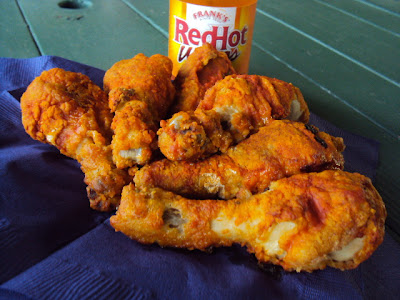 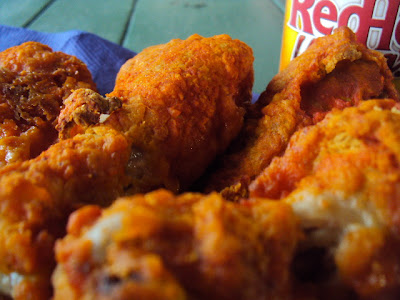 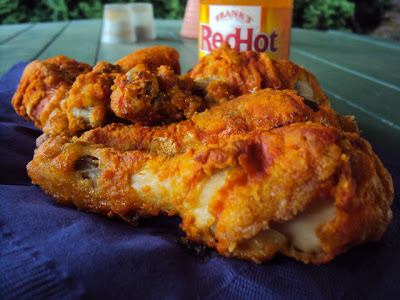 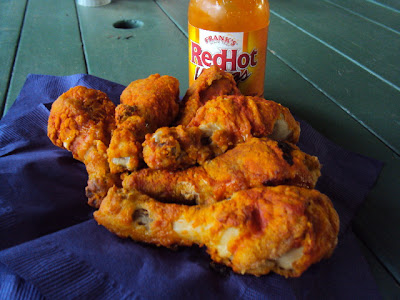 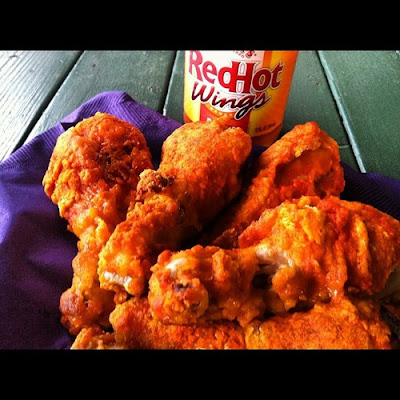 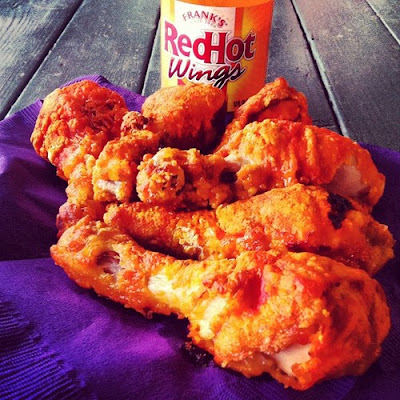 They were super delicious! I love creating new recipes on my own! It worked out beautifully,
and they were tasty!
Make sure after dealing with raw chicken, you bleach everything that you touched with raw chicken hands, including your sink!
I hope that if you make these drummies, you will enjoy them as much as I did.
Labels: baked chicken Baking breaded chicken buffalo sauce complicated baking dinner food hot drumsticks hot wings Krusteaz recipes yum