Thrifting With My Cousin Abbie

This morning, my cousin Abbie called me up and wondered if I wanted to hang out. I said sure! Of course! I love hanging out with my cousin Abbie! So, Carter (my other cousin, Abbie's brother) came with us and we went to Goodwill first. We didn't find anything there... first of all, Abbie was looking for a jacket type thing and some cowgirl boots. I was just kinda looking for random things... and then I remembered some projects I wanted to do with thrifted items! So, I was looking for shorts and suitcases. At the first Goodwill, we didn't really find anything... we thought we found some stuff, but they just didn't work out. We went across the way to Salvation Army... we had some fun there! And I found a suit case! But, I didn't get it. I will probably go back there and grab it for my modge podge project! I'm really excited about it. It's like a vintage looking suitcase too! I took a picture of it so I can come back to it. 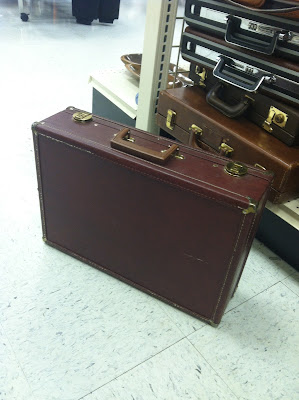 So, I hope to go back there sometime this week and grab up the suitcase! I really want to do that modge podge project! It's perfect for me!!
We were walking around the store, Abbie was telling me about some [drama] and I noticed this cute pink and white polka dot mug! I would never get mugs... well... maybe I would mugs from thrift stores... actually I WOULD, all you would have to do is sanitize it! I need to stop being so picky! I thought it was very girly and cute! 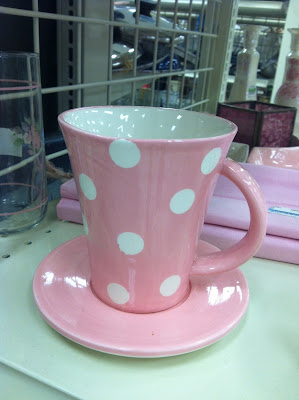 I liked the mug! It was adorable! I also looked at mason jars to use for crafting and DIY projects, and they weren't expensive at all! I will definitely go back there and do some shopping for future blog projects!
[ALL FOR THE BLOG]
Sooo, yeah...
We found Carter, he was sitting on a couch playing with these... hmmm how do I describe them? They are these 'needle' toys... but they aren't pointy. They have like a flat edge... oh I will just show you the picture! Anyway, we saw him messing around with this thing (that we love and have loved since we were kids) and Abbie wanted to mold her ear to it...
So she did... 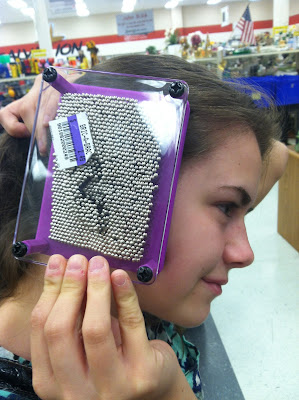 See what I mean now???
Yeah.
It was actually very hilarious!
After Salvation Army, we went to Abbie's house and we were snacking for a little bit and started watching this movie with Will Smith in it about Malcom X and the 60's and boxing... I don't know what it is called, but Abbie and I both agree that we want to rent it and watch all of it! It's a very interesting story, and the movie is three hours long! OH! I think it was called 'ALI', like Muhammed Ali? Yeah.
That's it...
We then got hungry, and Abbie started to put the pizza in the oven... Hamburger pizza!
This would be my first time having hamburger pizza and I was actually pretty excited about it!
Once it was done, Abbie cut it up and I tried, for the first time, Hamburger Pizza! 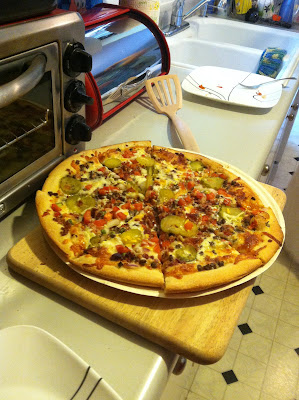 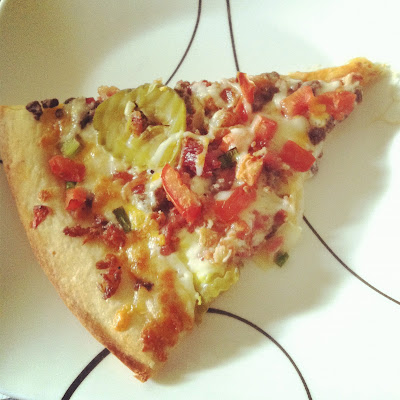 It was REALLY GOOD! A bit different having pickles on my pizza, but it was delicious!
For dessert, we had these ice cream York Peppermint patties.
So delicious as well! 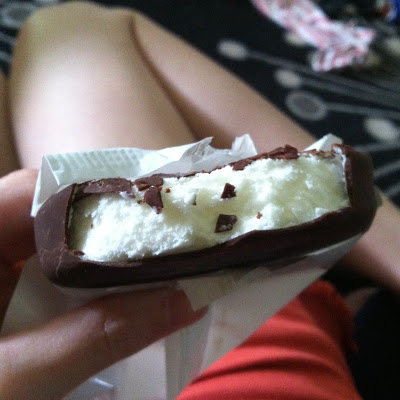 It was just like eating a frozen York Peppermint pattie, which I ate all summer long last year! Only, this was better... actually, they are both awesome! I'm gonna have to do that again this year!
And maybe make my own peppermint patties!
After our ice cream, we watched some more of Ali, and then Carrie (Abbie's mom), Keegan (Abbie's other brother), Abbie and I all piled into the van and we drove to the Goodwill by their house. We made some progress there! I looked through the shorts, nothing was my size... I know... you can't be too picky while thrifting... but there were NONE my size... kind of disappointing.
Abbie finally found cowgirl boots, and lots of pairs, probably like 4 or 5, or 3 or 4. ALL SIZE 9! She is a size 5! WOWWW.... Ha! The place that has them... doesn't have them in her size. Again, very disappointing.
We messed around in the shoe section, finding funny shoes and looking around and things.
We found some pretty interesting shoes and just tried them on for size! ha! Was that a pun?
(my leg, foot trying on square chinese flip flops) 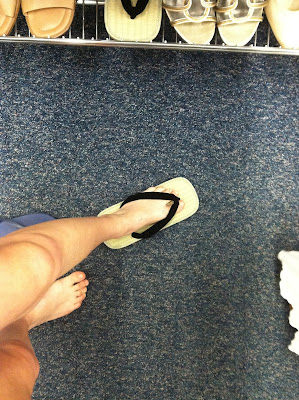 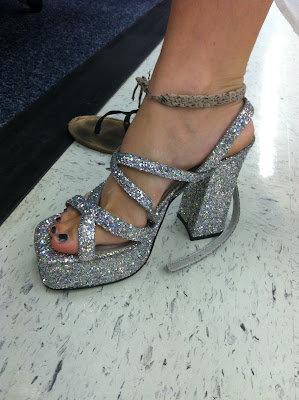 Quite interesting!
Then we looked in the shirts section. She wanted to find a floral little jackety type thing to go over whatever... like a tank top or something. So, we were looking through the massive array of colors of Goodwill, and I had to take a picture!
[picture(s)] 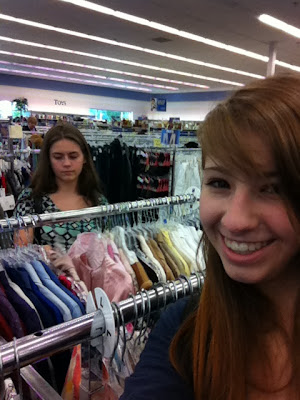 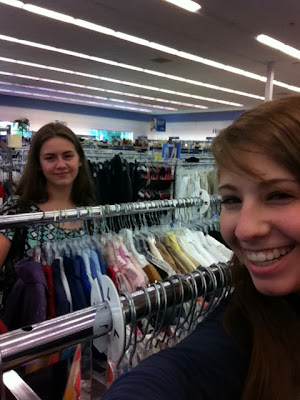 And we have some results! (FINALLY!!) 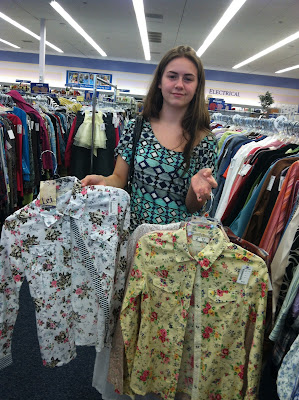 She ended up buying the white one... although the yellow one you can wear with more colors, in Carrie's and my own opinion. But yes, Abbie got the white one, and it does look really good on her!
After they purchased their items, we went on over to Famous Footwear, and we looked at shoes. Abbie showed me some shoes that she wants, her four favorites. I looked around as well, and found some shoes that I would like for hiking and walking. 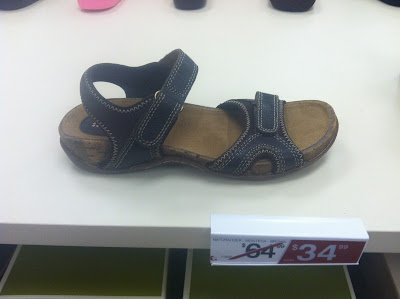 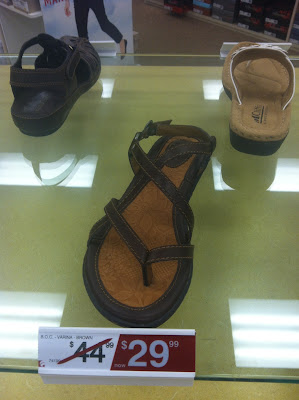 I hope to get Chocos though. :)
We looked around some more, and left Famous Footwear.
Then Abbie took me home and she stayed! I was actually really excited about hanging out with her. Since my mom's new phone came, we looked at phone cases and Abbie told us some [drama]. After we looked at cases for a couple hours, I was getting blog antsy, and wanted to bake or cook something. I was surfing Pinterest and flipping through the cook books, and then I found the perfect, easy thing on Pinterest!
And the blog post about that will be posted later! Or tomorrow!
Today was amazing!
(And we were trying to figure out our new WII!!! Yes!! We got a Wii yesterday!!!! So excited!!)
Happy future thrifting everybody!
And good luck!!
Labels: Goodwill Hamburger Pizza pizzas Salvation Army thrifting