They Sky and All It's Inspirations

As I have mentioned a few times, a summer tradition that I have is to go outside in the evening with my headphones and iPhone (used to be just iPod, but now I use my Pandora app for music.), I sit on my swing set, on the swing and I listen to music, swing on the swing, and look at the sky. I love the sunsets and clouds. I love how the sunsets reflect off the clouds and give the clouds a pink or orange color to them. I love the cotton candy clouds, where they are blue and pink. Clouds inspire me. The designs and beauty in them. I have been wanting to do this post for the past couple days, and I wanted to collect as many sky pictures as I could. These were all taken with my iPhone, I can get a better span of the sky with my iPhone anyway. I can also instantly post them to my tumblr that way. The past few days, I have gone outside in the evenings and taken many cloud pictures. I am excited to show them to you.

These were taken two days ago (7/18/12)
The sky was full of clouds on Wednesday! 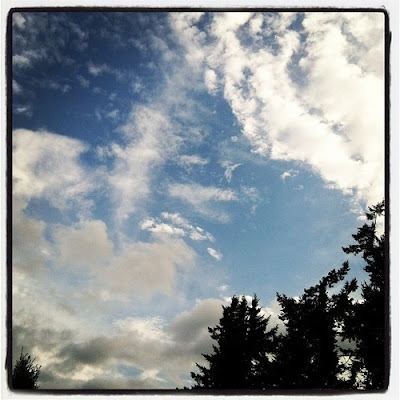 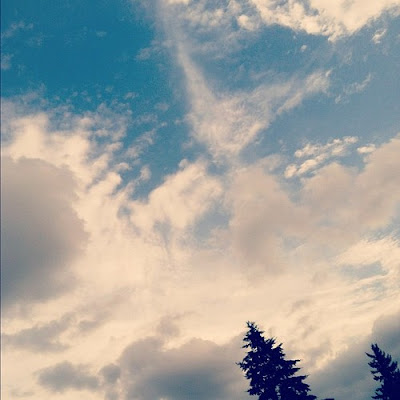 I also found little critters on Wednesday too, during my swinging time.
I found a little potato bug crawling on the grass. Having a hard time crawling... poor little guy. 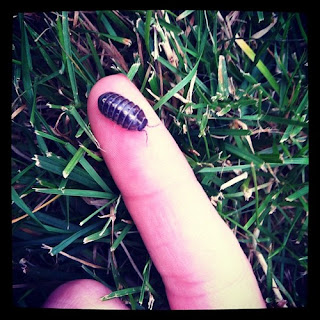 One critter was a critter that I love very much, my kitty. He was being very lovey dovey.
He even kissed me on the cheek :) 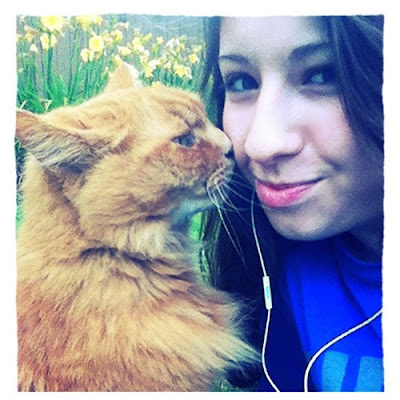 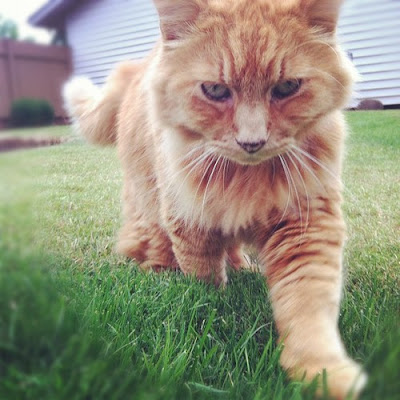 The next day, Yesterday, my goodness! The clouds were crazy insane!
They were absolutely gorgeous!
Starting with the clouds at Walmart. We went to Walmart yesterday, and the clouds were fantastic!
This is before going into Walmart... 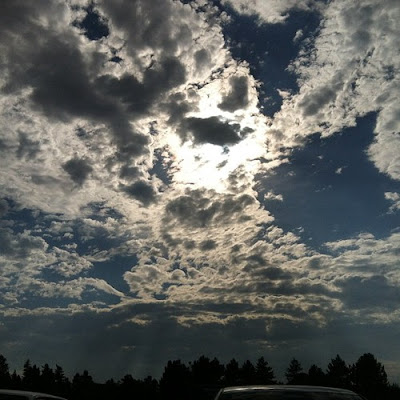 This one is edited, but just a color change. The one above is normal. Not edited.
I just wanted to have a picture like the cloud pictures on tumblr. I wanted to be famous. :) 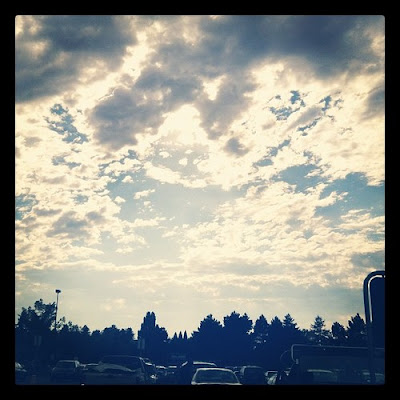 And this one is after our Walmart shopping, when we came out of Walmart, the clouds merged and moved a little bit. It was awesome!
It also started to rain... indicating a storm. When clouds are this insane, and it starts to rain, hello thunder :) 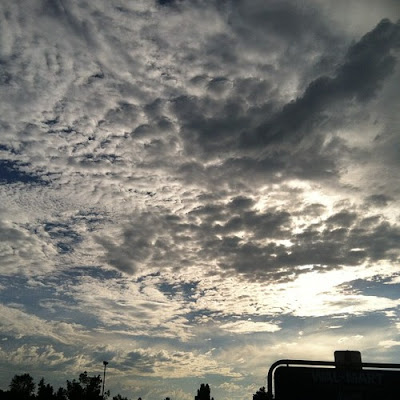 When I got home, I immediately changed into some comfy shorts and a comfy Aerie t-shirt, and went outside with my headphones and phone.
The clouds were gorgeous! 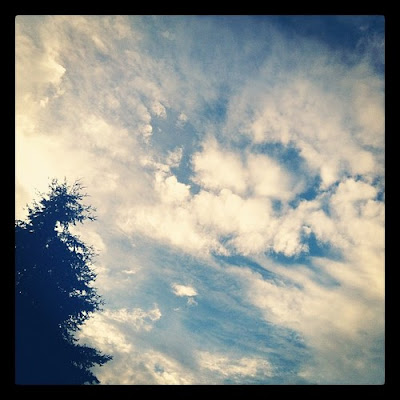 I made a few cloud GIFs. If you don't know what a GIF is, it is like those flip books, where there is a drawing or a picture and when you flip it, the character moved or something. Well, a GIF is like an online flip book, like a virtual flip book. I made some really cool ones!
Tumblr inspires me.
I got the cloud GIF ideas from Tumblr.
I put a little message with each one, the message for this GIF is...
"Soar threw the clouds, take a leap and make a wish."

I made all of these with my phone with the GIFboom app.
I made four cloud GIFs, including the one above.
This one is of a bird, flying...
The message that went a long with this one is...
"Fly Fly Fly away"
(I know... the message is a little dumb...)

Here is just a plain cloud GIF...
This is the little message that went along with this one,
"Imagine you can go anywhere in the world. Where would you go? Who would you want to be with in that place? Close your eyes and drift away."

This next one didn't really have a message, but it's one of my favorites because it looks like the actual GIFs that are Tumblr, the ones I see on tumblr and the ones that inspired me. I was so excited!

I was so excited about my GIFs!
I took some more cloud pictures and I edited some of them, just to make them interesting to Tumblr. 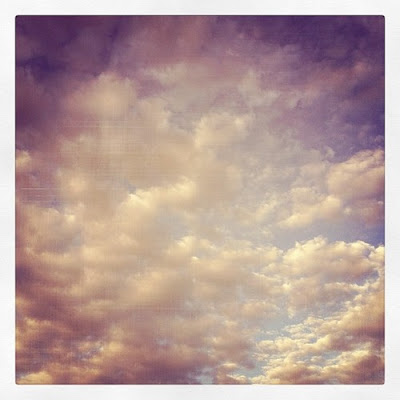 This one is only collaged, I put it in a collage, but I didn't add any tints to it. This is all natural, except for the boarder and collage. The clouds are the actual real color. 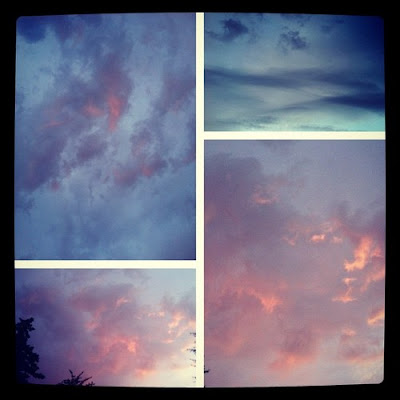 Not too long after the pictures above were taken, I looked to my right and saw that the whole sky was glowing orange. It was a spectacular sight!
It was gorgeous, like we were in a giant glow stick!
It was wonderful to see! 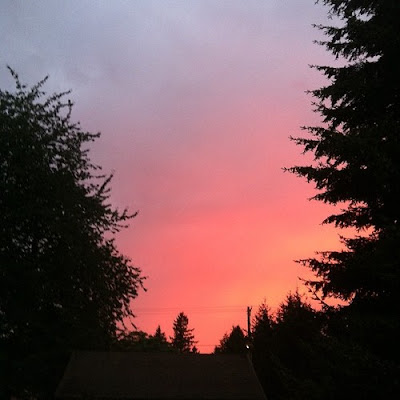 Right then, I heard a big crack of thunder. The orange sky slowly faded away and then lightning came in!
I actually stayed outside with my music for a lot of the thunder and lightning storm! I kept thinking about if the bolts were to strike right where I am... that would be bad. But nothing happened to me. ha.
It soon got dark, and the lightning was flashing the sky around me. It was awesome!
Suddenly, there was this HUGE bolt. The thunder was loud and the lightning was huge. I jumped off my swing, ran to patio and my dad ran out and I'm like, "I'm done! I'm done being out there in the open. That was risky enough for me."
HA... So we stayed outside, under the patio roof and watched the lightning.
I filmed some of it, and it was so quick.
But I did get some on film and made it into a GIF, I made it into a GIF so you and tumblr could see the still of it. It goes by so fast, it's hard to see, but not in my GIF. :)

Here is another one, but not as cool as the one above...
It's still cool though!

My dad and I were having fun filming the lightning. We actually went out into the yard and filmed it. We are risk takers. ha.
I searched through my videos because I thought I got a big bolt of it, but I guess I didn't capture it.
I did capture those two though, and I am sooo happy about that!!
Anyway, the point of this post was to show you how the sky can be so inspiring and how God puts his beauty through nature. It leaves me breathless, because it's so beautiful and takes my breath away.
Also to show you my wonderful photography skills and creative skills.
:)
My iPhone does pretty good!
Be inspired folks! But also, be inspiring :)
Labels: cats cloud pics clouds Gif inspiration Inspire iPhone4 lightning music Nature photography Sky storms Summer summer storms thunder Tumblr Walmart