Yesterday, I cried all day. I binged out on junk food and cried some more. Why did I cry? For many reasons. I was tired! I was sad about my blog projects because I couldn't find a single recipe for baked maple bars that was easy. Well, I found the recipe for the actual maple bar, but not the glaze. I was tearing google trying to find a maple glaze recipe. Another reason was that I couldn't find a good, easy recipe on how to doctor up the top ramen, from the packets. I wanted to do that yesterday, but I couldn't find a good recipe. They all required tofu! I might just have to put on my thinking cap, and create my own. The last reason why I was sad all day, the reason I will say on my blog, is that I watched this movie yesterday about Lucille Ball and Desi Arnaz's life. I grew up with watching 'I Love Lucy'. Every time I would spend the night at my Grandma Williams house, she would put on 'I Love Lucy' and give me really chocolatey chocolate milk. I have watched 'I Love Lucy' my whole life... I know I am only 16, but I have had a life so far. So I hope nobody says, "You've been on the earth for five minutes! How can you possibly have memories?" Well... I do. I have a brain and a mind and I am four years from being 20 years old... I am actually very mature for my age... I am getting way off task. I do have memories readers! So... I thought that this movie was going to be like a documentary with people being interviewed and stuff. No.... it was a full fledged movie with actors and lines and costumes and slapping and drinking and cheating and yelling and sadness and cussing. It was marked 'comedy'. The movie is simply called 'Lucy'.

This is the movie cover... the actors. It's the only one I could find. 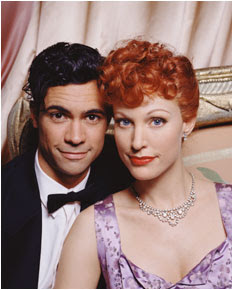 They were also kind of bad actors. Rachel York did a pretty good job of playing Lucy. The other guy, forgot his name who played Desi was kinda bad. Didn't even have the accent that Desi did. Made me sad. After I watched the video, it made me cry so hard. I kept thinking back to all the Lucy episodes that were featured in the movie, and how they were feeling that day, if they were in a fight or if Desi came onto the set drunk... I would know exactly which episodes they were doing because I have seen every single episode of 'I Love Lucy' about a million times each. I know every episode and every line to every episode. I know it's just a TV show, but it was shocking! It made me so sad. I didn't know that Desi cheated on Lucille! I knew he probably had a few drinks here and there, but always drunk! He slapped Lucille in the movie, and he beat up the house and ruined it because he had a temper, and about the cussing, the 'I Love Lucy' TV show was very modest! There wasn't any cussing in it. They couldn't even say 'Pregnant' in the TV show. But they cussed in real life... they are for sure real people. I just had to realize that.  I couldn't believe it. It was such a shock that two my of favorite actors could act that way towards each other... and on the show be entirely different. I guess that is what good acting is all about. But boy, did it make me sad. I cried off and on all day yesterday! Mostly about the movie. When my sister was making me a pizza yesterday, I found an 'I Love Lucy' disc sitting on the end table. I took a look at it and Ricky and Lucy were both on it. I immediately started to cry. Then I kinda just faded out of the crying, and when my mom came home from work, she said, "How was your day?" and I said that I had watched 'Lucy', and that I never want to watch 'I Love Lucy' again. I started crying while I was saying that and my mom said, "Oh... you're crying..." And she came over to me and explained. She was very concerned why I was so sad about this! I told her because it's sad to find out that he cheated and came on the set drunk, stayed away from their home for weeks at a time, bought a boat just to sleep with girls who weren't  his wife! Slapped Lucille and beat up the house. My mom looked at me weird, "Desi was never violent... he was the sweetheart of the couple." She said. She has actually read both of their personal biographies that they wrote. Lucille was the fireball, and Desi was the one who played with the kids and if there was a problem, he would be the one to smooth it out. In the biographies, it said that he was never violent, but he did cheat. Desi Arnaz is and was (because he is now dead and so is Lucille) Cuban. In Cuba, a wealthy man would have a wife and family in the big house. Across the plantation, the wealthy man would have a mistress in an another house. That is just how it was. Desi couldn't grasp the American way to be a husband back then. Well, Desi did come from a rich family and he cheated on Lucille. It made me very sad.
My mom also told me it was about perspective. The movie that I watched was one person's perspective on their life. The biographies are probably more trust worthy because it was written by the actual people. Lucille Ball and Desi Arnaz did have a wonderful love story. You can tell were they were very much in love. They just had some rocky points in their marriage and it ended in divorce. I wish I could have met Lucille Ball, in person. She is such a legend! I am feeling better about watching 'I Love Lucy' again, but I am going to wait a little bit. Give me some time to kind of 'recover' from the whole thing. I need to be careful about those documentaries and biographical movies, they could be the wrong thing and tell some lies. My mom said there is another movie about Lucille Ball and Dezi Arnaz, and she said that one was really good and that she liked it. I might have to find that one and watch it.
The movie 'Lucy' was kind of a big lie... they made Lucille seem so sweet and Dezi so evil. Well, I knew that Dezi was the sweetheart and Lucille was a fireball before, and I knew something was a little twisted in the movie. It still made me sad.
Here is a picture of Lucille Ball and Dezi Arnaz... The real people. 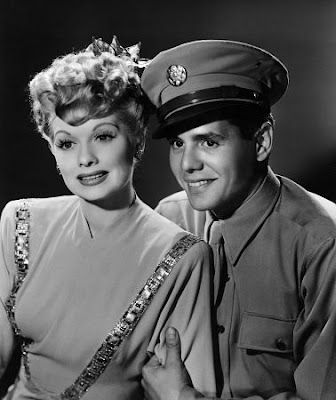 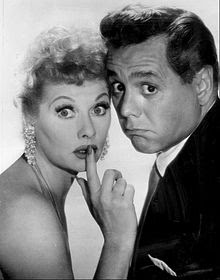 Lucille Ball and Dezi Arnaz did some movies together. One of my favorites is the 'Long Long Trailer'. Here is a picture from that. 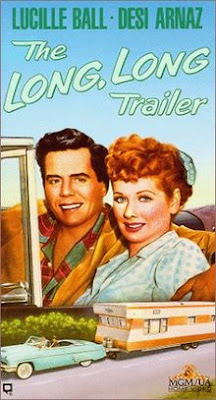 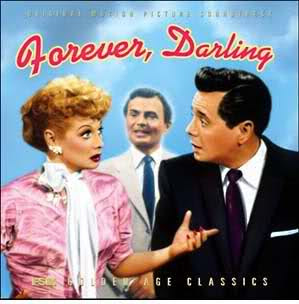 They really did love each other and they did stay friends even after their divorce. That makes me feel a whole lot better. I had to vent about my 'I Love Lucy' fiasco that happened yesterday. It was an ordeal for me.
Ha. I think later today, I am going to put on an 'I Love Lucy', sit down and enjoy it, and think of all their happy times.
I really do love Lucy!
Labels: Desi Arnaz Forever Darling I Love Lucy Lucille Ball Lucy Rachel York The Long Long Trailer