I found this idea on pinterest. I find a lot of my ideas on Pinterest. Pinterest is simply amazing! This idea is you make Popsicles with a liquid and fruit chunks. 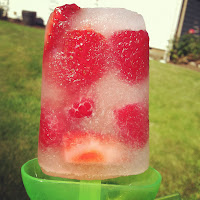 How to get the fruit chunks to stay in place... that was something I had to figure out. Then I thought of the perfect solution! Making the lemonade into a slushie first. For Easter, for part of my basket, I got this slushie shaker. It's like the blender bottle, but it has no whisk type thing. It does have two square ice cubes. You put them in the freezer and let the liquid freeze up, then you pour lemonade or pop or anything into this bottle, you put the ice cubes in and you shake it. After you shake it, it becomes a slushie! 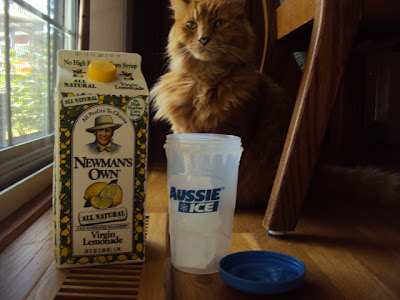 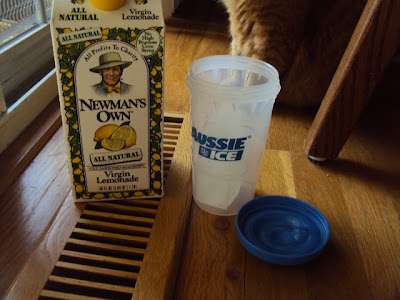 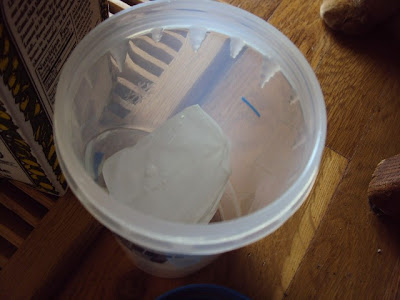 I poured the lemonade into the bottle, and shook it up into a slushie! 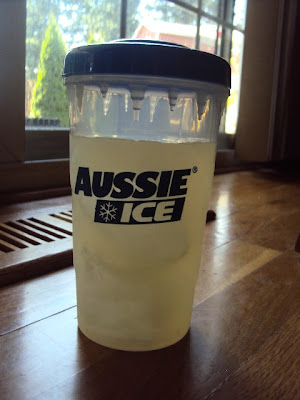 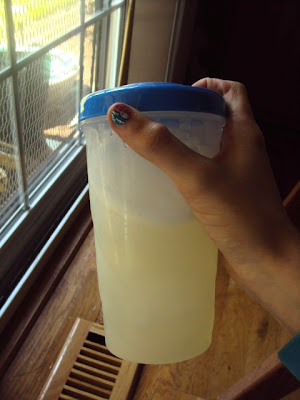 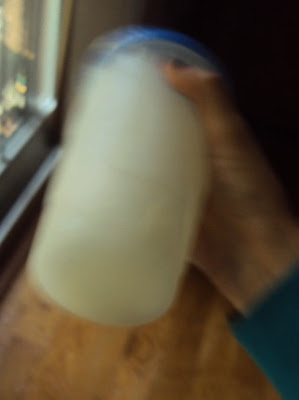 I left the slushie alone... knowing I should have probably cut up the strawberries first so I wouldn't have to let the slushie sit, but oh well...
I washed and cut up strawberries. I washed raspberries and I got out the popsicle mold things. 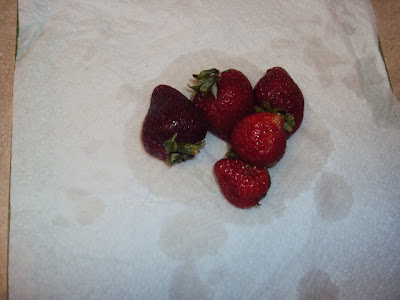 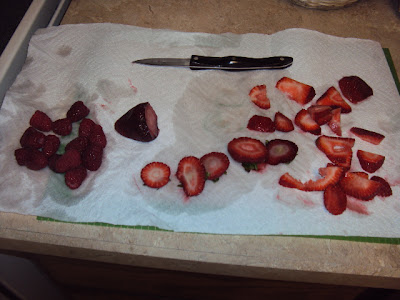 I reshook the slushie so it was back to par, and not all melty. 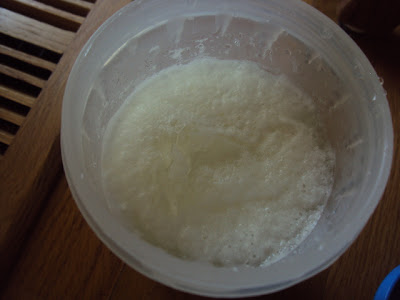 It's crazy how that thing works! I made an orange juice slushie in it a while ago... like in April. It was delicious!
I gathered all the materials for the popsicles and I started to make them.
I first poured the lemonade slushie into the popsicle mold, just one of them and I stuck some strawberries and raspberries in it. It was already starting to look cool.
Like I said earlier in the post, I made the slushie so that the strawberries and raspberries wouldn't just float to the bottom of the popsicle mold, but that they would be positioned in certain places of the popsicle. 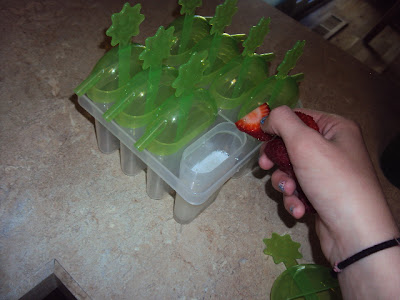 My idea worked! It was awesome. The strawberries and raspberries were held in place by the slushie and I couldn't wait till to see the final result. I ended up making only four of the eight popsicle mold things. I am just going to call it a maker. A popsicle maker. I only made four because I know that my family won't eat more than one each, if that... Four seemed plenty and that is how much lemonade slushie I made.
It worked out perfect. 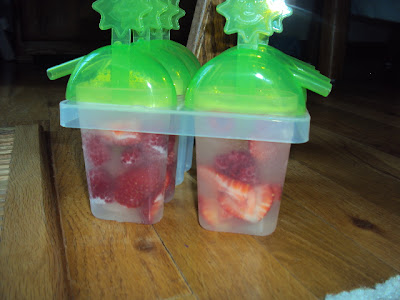 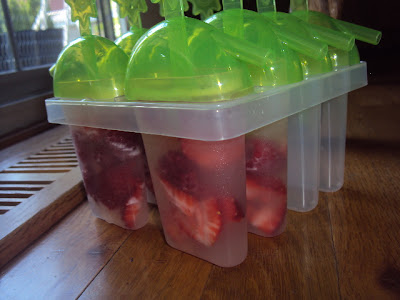 I put them in the freezer, and left them in there for about... 5 to 6 hours.
After I took them out, they looked so good! I ran hot water over them to get them out.
They looked perfect! 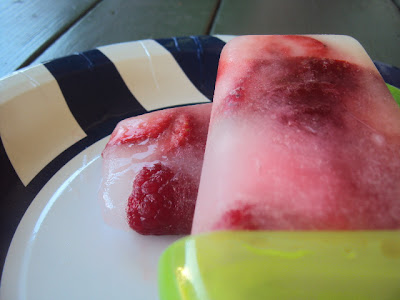 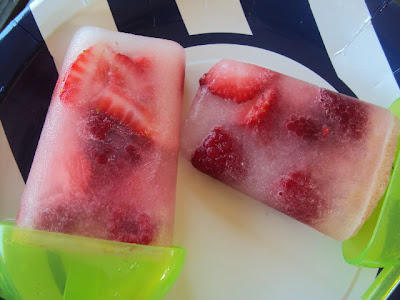 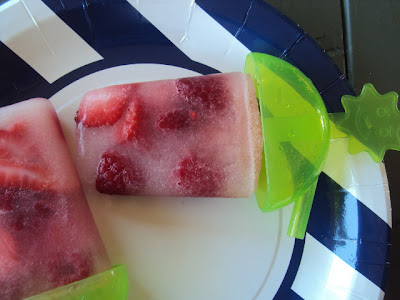 So... then it was time to do some cute pictures with popsicles!
Yes, I went all photo frenzy!
Britt and I both! 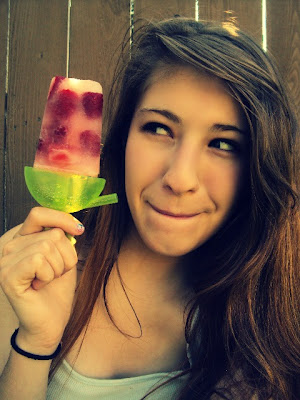 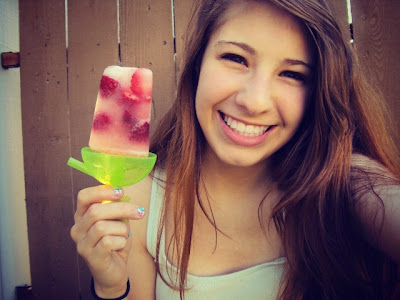 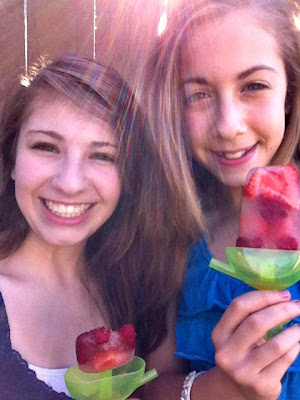 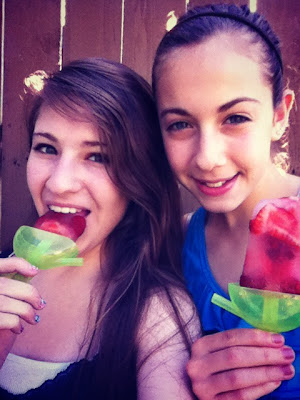 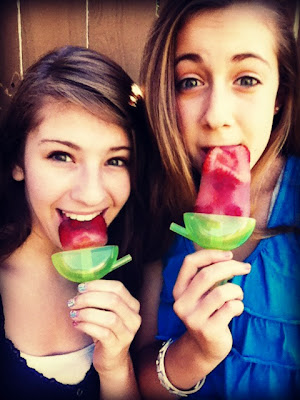 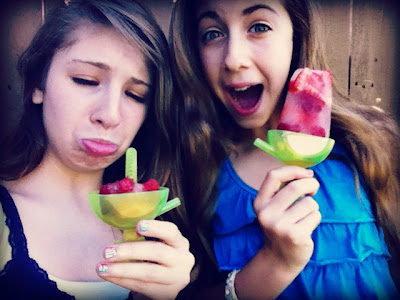 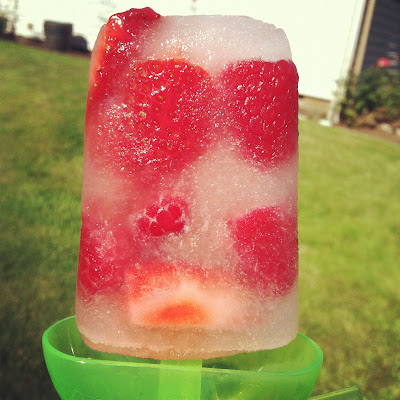 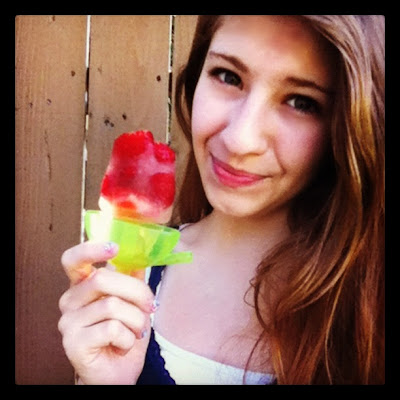 They taste so good! They taste like pink lemonade, strawberry lemonade, raspberry lemonade.
YUmmmm. These popsicle maker things have little straws on them so that you can drink the melted popsicle from the cup thing. It's a very clever idea! But, a couple times during the picture taking, I spilled my popsicle 'juice' all over me, and it didn't feel sticky, because the lemonade is NATURAL! I love natural things!
Homemade popsicles are clearly the best. :)
And these are healthy because they have natural lemonade and real fruit in it. :)
They are super cute too!
They are super easy to make, super tasty and super pretty!
I wonder what popsicle I can concoct next.... hmmm....
Labels: ALL NATURAL homemade popsicles popsicles Sisters Summer summer blog project yum