Happy 4th of July everyone! I am going to start blogging about my day, even though it isn't over yet. Still have to go watch the fireworks show later! So... I am going to tell you about how I spent my 4th of July! This morning, I woke up at 6:36 AM, all because my arms were itching and burning. My elbows had bug bites on them! I hate bug bites. I put on some 'no itch' cream, and it was fine. I took a shower and then watched some Netflix shows, and then I started doing my hair. I had been brushing it down all morning! Combing it all morning, making it smooth! After it was dry, I straightened it and put in my headband.I got dressed in my 4th of July outfit and I was so excited! So excited to get the day started! 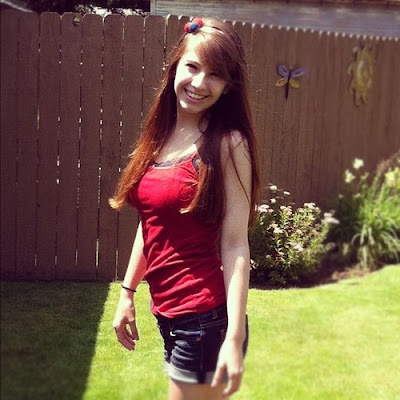 After we got ready, I made a list for the store, for supplies that I would need for my Fourth of July projects, like cupcake stuff and dinner stuff. Fruit and things. I drove to store with mom and Fred Meyer was packed! This crazy (nice) guy seemed to be following us or something... we passed by him once in one aisle and he said, "How ya doing ladies?" And I just passed by him... was at first wondering if he was a friend of my mom's... but that wasn't the case. I thought it was a little creepy that the guy just randomly said that to us....
hmmm... then later at the check out stand, we did the self check out, he was right behind us! "Happy fourth!" He said. That was nice! So, I said "Have a happy fourth yourself!" And we left and got in the car. As we were leaving the store, like the leaving the parking lot, there he was again, walking out of the parking lot! It was an adventure... also in the parking lot, as we were carting the food to the car, there was this guy in his convertible, blasting his music and looking at me, dancing to it. He was probably just being silly... weird people. But it's nice to run into nice ones! Nice weird people.
We got home, and mom and dad left... yeah, nice of them to leave their two daughters home alone by themselves on Fourth of July! bahaha. Nah... it was all good! See, where they went, there is nothing for us to do there... and hasn't been that way for a while... due to some 'maturity' problems... anyway, we stayed home and had our own Fourth of July!
Before I got started on the cupcakes, or anything really, I prepared the tea! I took five bags of Tazo Passion tea and put them in our watermelon drink dispenser. I filled the dispenser with water and I set it out in the sun. I loveee the Tazo Passion tea when it is iced. It tastes refreshing and it's an herbal organic tea, so it is also cleansing. 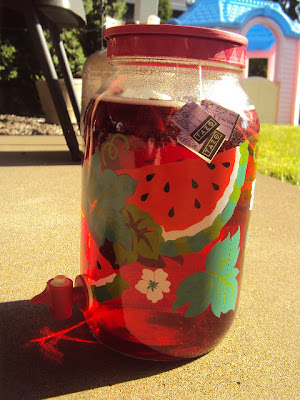 After, Brittney and I got started on the cupcakes!
And yes, I made it from a white cake mix from a box, because I didn't want to spend too much time.
The box cupcakes took a lot of time too, the frosting consumed most of our time! 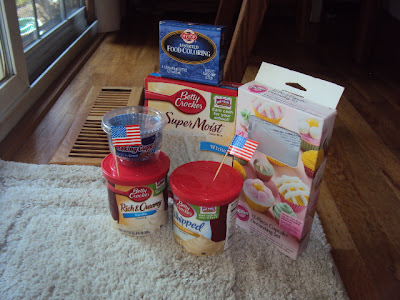 I started on the cupcake batter and Brittney started on the frosting, coloring it with the food coloring.
I began on the cake, and then got to the part where I needed eggs... I remember that at the store, my mom said that we needed to get eggs and to remind her. Well... I didn't remind her and so we didn't have eggs... I had to quickly walk to our little corner market and buy a dozen eggs. No biggie. It was great exercise. Why didn't I drive?? Because I am alone, and don't have an adult with me and I don't have my license yet. I will be getting my license on July 10th.
After I came back home with the eggs, I finished making the cupcake batter and then I dyed it with the food coloring.
I made Red, White and blue! 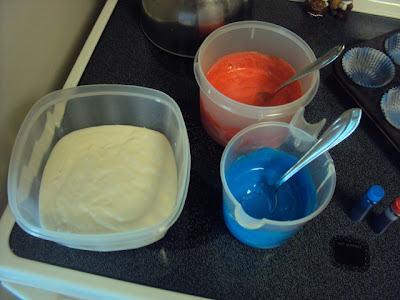 At the store, we found these perfect cupcake liners! They had like a blue firework on them and they were just perfect!
I lined them up in the pan, and began to scoop! 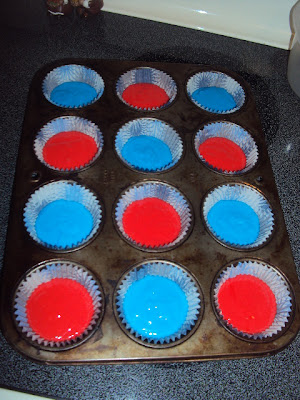 After they were done, we began to frost them. You see, Brittney tried something new with the frosting. She died it with berries. Blueberries and strawberries. It made it red, with the help of food coloring, but it also made it watery... so the cupcakes we frosted with the watery frosting turned out to be a fail... 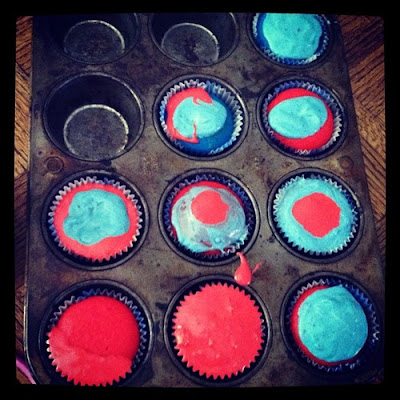 This is what I ended up doing. I took the left over vanilla frosting, I knifed it on the cupcakes that were not frosted and I made them super cute! They turned out so much better! 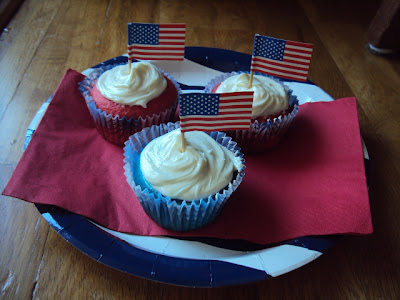 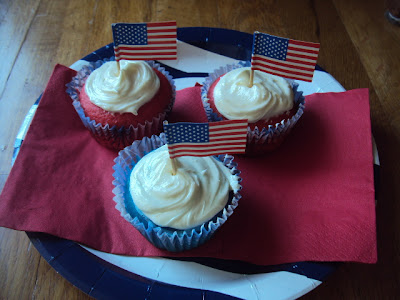 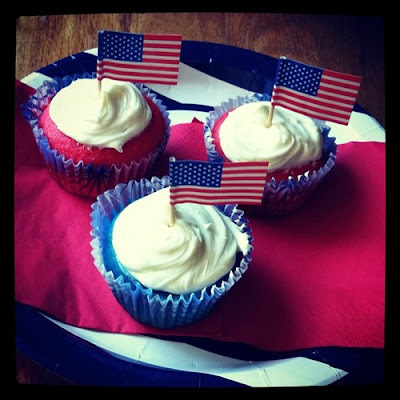 Oh so cute! I found the little flag tooth picks this morning. They are a perfect touch!
So, I saved my cupcakes! We cleaned up the cupcakes, and then we started on dinner. Grilling Johnsonville turkey sausages and having blue mayonnaise! Oh yes! 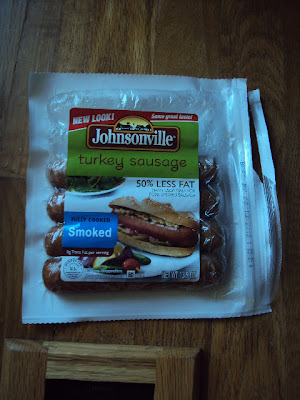 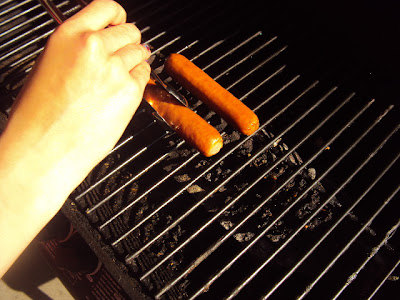 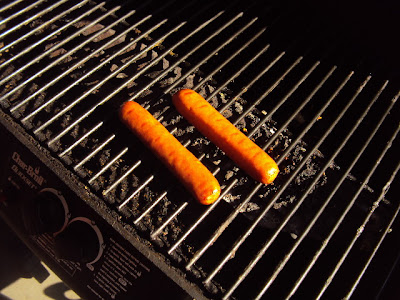 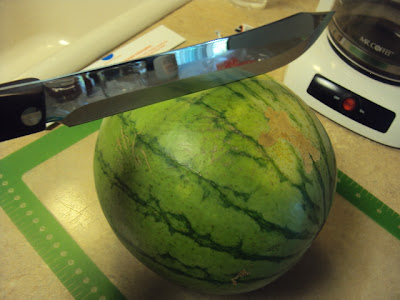 After the watermelon was cut up, and the hot dogs were done, I had to get my mayonnaise ready! I got out the mayonnaise, which was my hand size! It was so tiny and cute!! I found it at the store and thought it would be perfect just for today. It is so cute, and little!
It's the size of my hand! I don't have huge hands, but I don't have really small hands, I do have small hands, but not REALLY small hands... 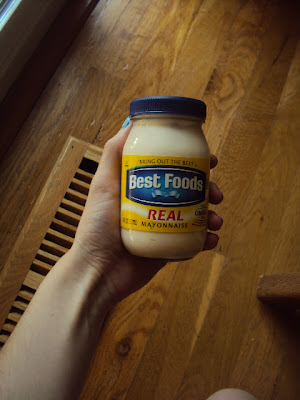 I dyed it blue with the food coloring... I put it on the hot dog with non-dyed mayonnaise and ketchup.
I got my sun tea ready and put it in a mason jar for cuteness! I also found these cool pom pom decoration things that I stuck in my drink. I thought my creations were pretty awesome!
I took a plate from my birthday party, and found some red napkins, Red White and Blue! I put my dinner on there. I even had Red and Blue fruit! My chips weren't red though, they were orange... whatever though, right? 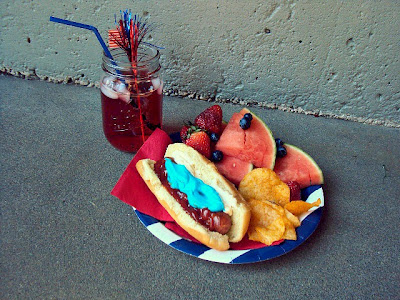 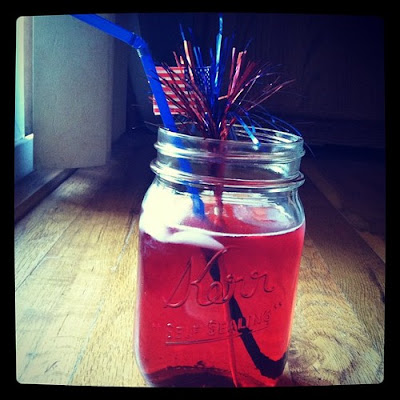 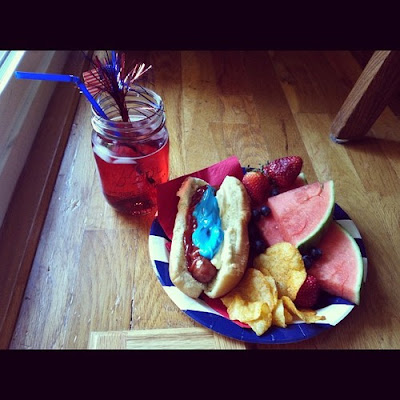 I ended up wiping some of the mayonnaise off, and putting some mustard on the turkey sausage. I can't eat a hot dog/sausage with out mustard on it. It doesn't taste right!
The meal still looks and definitely tasted festive! 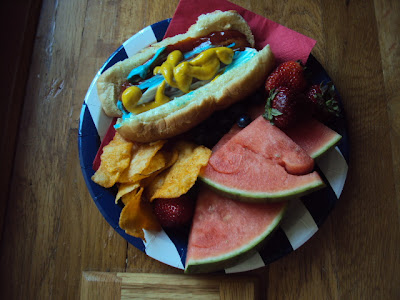 Very yummy! After dinner, I took my cupcakes, the ones that didn't fail, and I took some cute Fourth of July pictures of them. I was really proud of them and thought they were so cute!
I took somewhat a lot... I wanted to get my headband in there! I wanted to look festive, and I did!
Some of the pictures are edited...
Not much though! 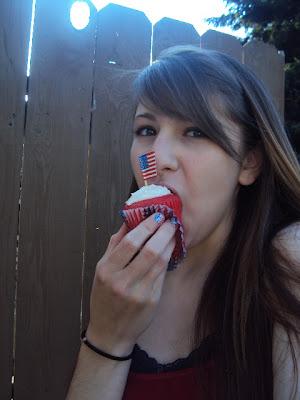 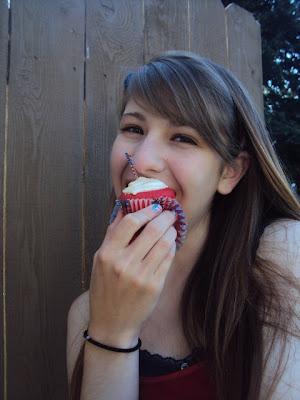 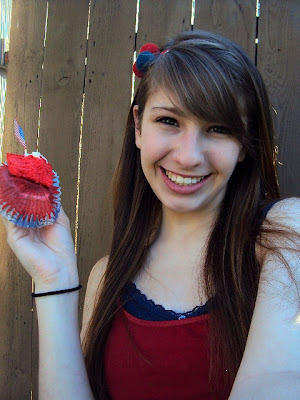 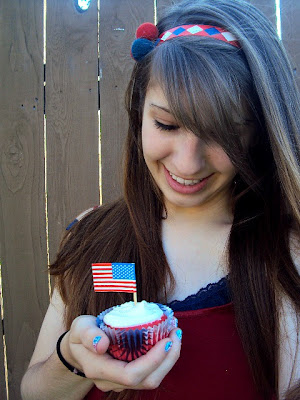 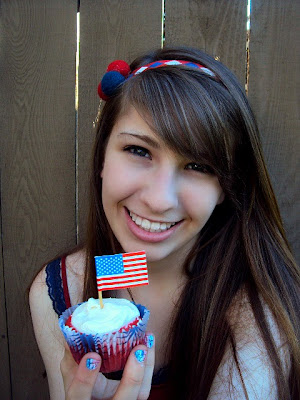 I took some fun pictures of my cupcakes too!
The sun was just perfect! The angle was awesome! 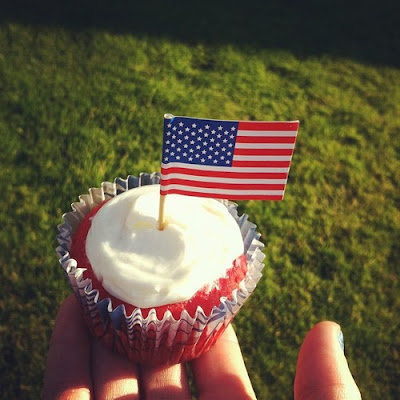 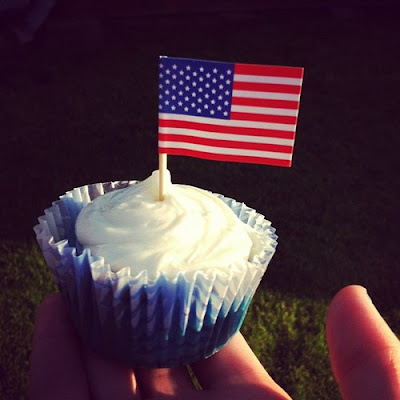 I went in and relaxed for about an hour... that is when I started on my blog post. We were watching Family Ties... yes... we love old TV shows... It's not that old... but yeah... ok! So, during that time, the fireworks were starting to go off. It was very loud and sounded like gun shots. It was cool to hear though! Punky didn't like it much... he was sulking around, or skulking? He was very low to the ground, his chubb hanging low... and he ran under my sister's bed! Poor Punky Fat Boy :(
At around 8:30 to 8:40, my parents came and picked us up to go watch fireworks in Happy Valley. It was kind of a lamo fireworks show. I am used to so much more! Like... right up front. It was good though. I made a fireworks collage! 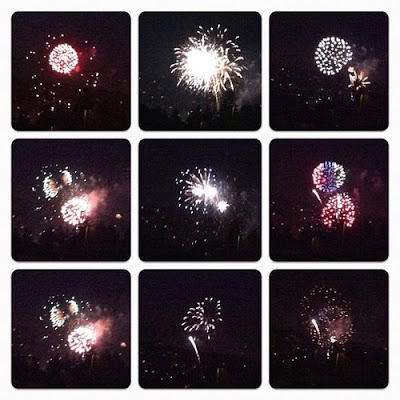 Today was awesome! I went all out and I had a lot of fun doing it! I had a lot of fun making the cupcakes, and grilling and wearing my headband! This year was so great!
Happy fourth of July!!!
Hope everyone had a great Fourth!
Keep on being patriotic! 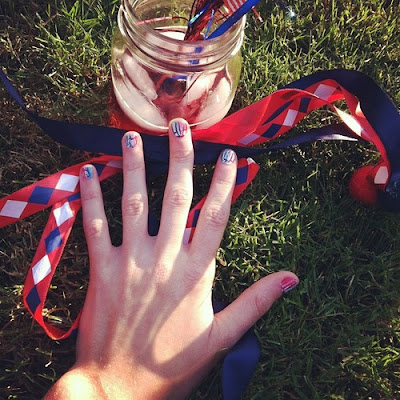