Yesterday was the second to last day of Spring break. For me at least. My family took ourselves to the World Forestry Center; Powell's Book Store and Voodoo Doughnut! It was a really fun day! 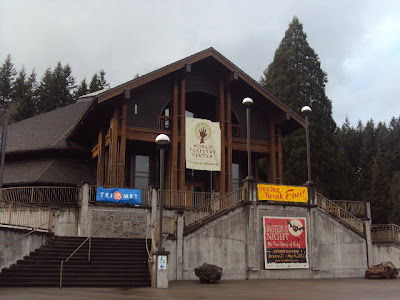 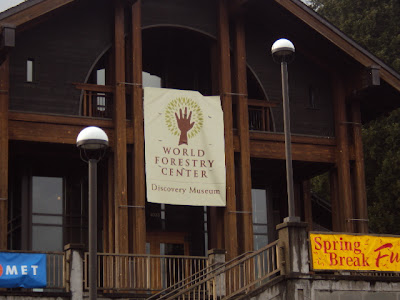 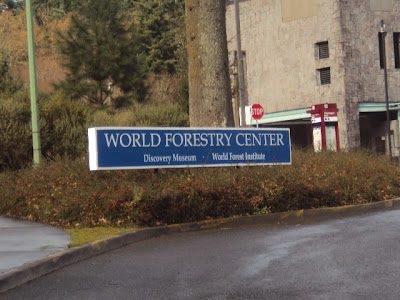 When we first went inside the building, there was this huge coffee plant, and huge door. I got Brittney's picture by them both. They are bigger than life!
Well, not really, just not a normal door size. 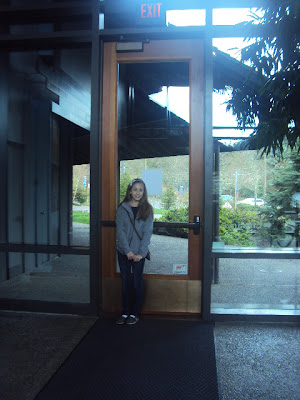 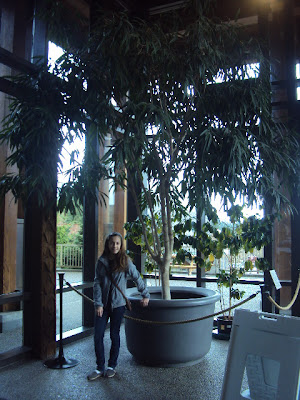 We paid for the tickets and went on our way. We first went to a white water rafting exhibit. My dad said it was an actual ride before we got to the forestry center, so I was expecting like an actual ride, like a theme park ride. It was nothing of the sort... Just a raft on a stand and you got into the raft with a life jacket and you could rock the boat to look like you were rocking back and forth. There was TV and camera in front of us that would film us rocking the boat in front of a screen that had a river on it so it looked like you were in the river. I got a picture of us cheese balls in the raft....
Better than paying for a picture!
and I'm the cheese ball in the back that's waving... 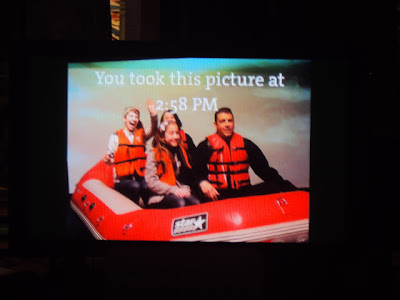 After, we traveled to the 'lumber' section, where they talk about fire fighters and lumber yards and mills and such. I found this fire fighter dummy, dressed in fire fighters clothes. I asked Brittney to get a picture of the dummy and me. Haha. He was kinda creepy looking, I'm always kinda wary when approaching a manikin. You never know if it is wired to move on it's own, or scare the crap out of you. But, I figured since this place wasn't anything high tech, it wouldn't be worth scaring little kids that just came from the zoo or the children's museum across the parking lot. It was safe to approach the manikin. 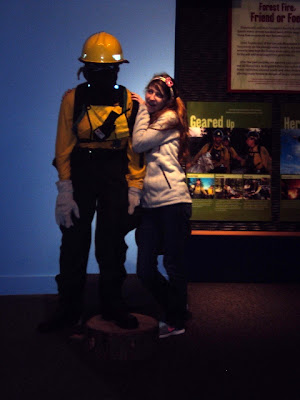 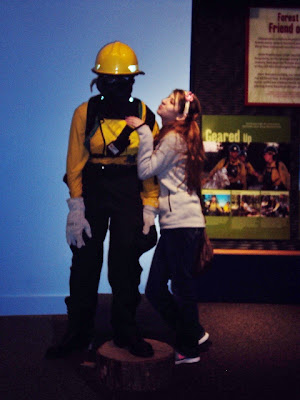 I have many manikin boyfriends around the United States... yes folks. I make friends with manikins easily. You can tell them anything and they won't spill the beans or let the cat out of the bag.
The exhibit right next to the manikin fire fighter was this parachute test drive thing. You sat in this contraption and on the floor was a screen, and you had to land on the marked point like you were flying in the sky. I didn't get to try it, but my dad and Brittney got to try it.
It looked complicated. 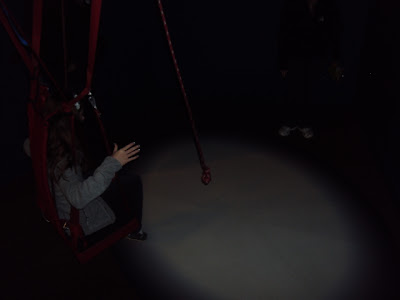 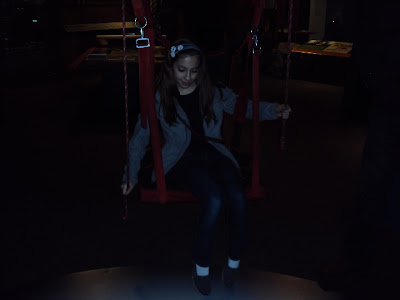 Across from the parachute exhibit, there was this 632 or something tree trunk type thing. Like a disc or tree. It was really old. It looked fake to me because it didn't look natural, but my dad said it was sanded down many times. I wish they could keep it natural. But it might rot... so I guess sanding helps preserve it.
I compared it to my dad's height, so you could see how big the tree was! 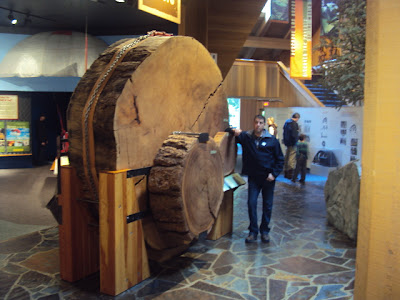 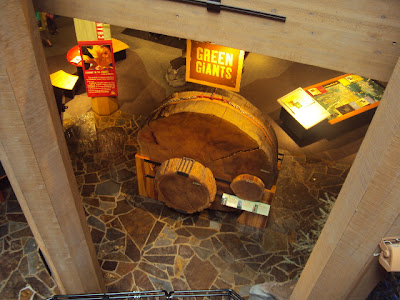 We walked around to a couple other exhibits. Some exhibits I asked myself, 'what was the point of that one?' We went upstairs and right on the stairs there was this fake Cocoa tree. Mom, Britt and I wished it was real. Tee hee, were girls and love chocolate. We also want our own cocoa tree so we can do whatever with the cocoa beans, make chocolate.... 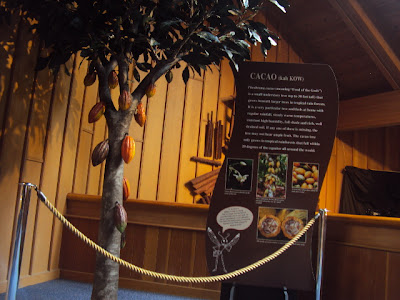 We continued upstairs, and there was this exhibit where it told what you can do with trees, and which things are made out of trees, like Gum, maple syrup, eucalyptus leaves, tea, etc. It just goes to show how much we really need trees, all kinds. And how much we really need forests. And of course, trees give off oxygen. :)
In another exhibit, behind the exhibit that showed what trees are good for, there was this 'tour' through the 'world's forests'. It was pretty interesting. That and the exhibit before that was the coolest in the whole museum. And the movie theatre downstairs that showed a movie about forests and how they impact people and animals. It was interesting, but stuff I already knew.
Well, in the tour with the world's forests, you started off in a 'train', it was just a replica type thing that you could sit in... and in the windows they showed the documentary. The next one you went to was a boat, for a boat tour in China. 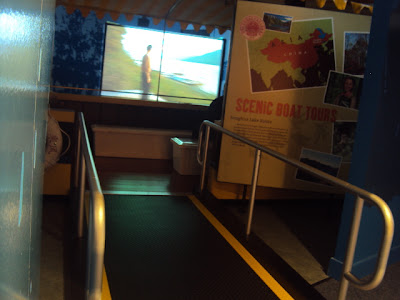 Then you went on a safari in a jeep... 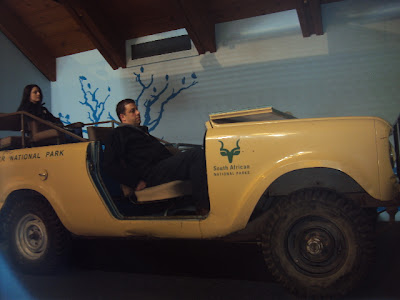 And then in this cage type thing that lifts you into the skies, so you can look at trees. 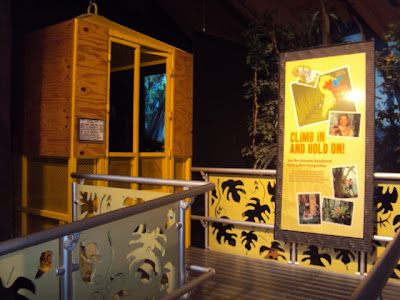 The next exhibit was a bat exhibit. I didn't like that exhibit very much. It gave me the creeps and bats freak me out. I went through that one quickly. Then I found this...
It measures up and compares how big the biggest bat in the world is to the smallest bat in the world...
That really creeped and grossed me out.
Could you imagine, running into a bat as big as the black painted one on the wall?
I should have compared it to Brittney, but I think you get the gist. 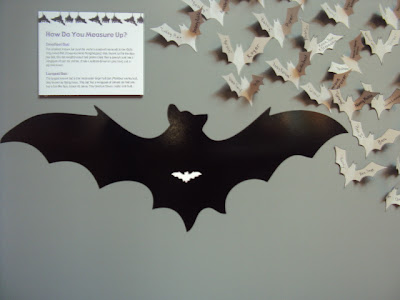 We went across the room to another room. It was the 'meeting' room, for when businesses or people have meetings or social gatherings. Just before you walked in, there were these pictures of the old Forestry Center in Oregon. The forestry center is still in Oregon, obviously, but this one was part of the World's fair!
There was a plate above the picture that had the old forestry center painted on the plate. It was cute. 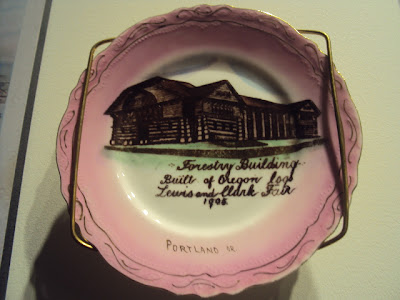 We went back downstairs, because Brittney wanted to check out the tree harvester tractor thing. There was this video game that you could sit in a chair, and pretend you were operating the tractor. Brittney cut down 1 tree, I cut down 1 tree and my dad cut down all 3! And still was below 'good' on the results. 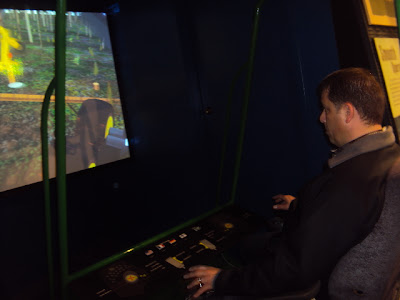 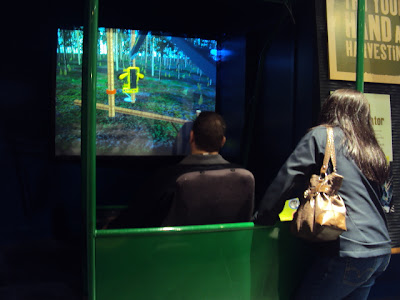 Since we had gone through all the exhibits, it was time to go to Powell's book store, but before we left the Forestry Center, we wanted to look through the gift shop. Usually, things like that have cheesy gifts. But I found these beanie animals. Not beanie babies. I have a collection of these animals, I have a dog, a turtle and a frog looking thing. I found a spin rack of these key chain beanie animals, and I had to get one to add to my collection. That is the little girl in me.
I picked out a little green frog. It's so cute! 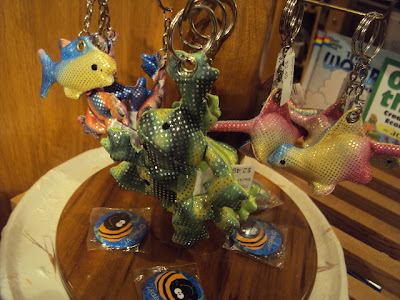 Outside the Forestry Center, there is a big train, like a logging or lumber train. 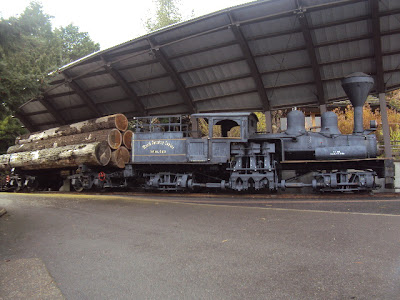 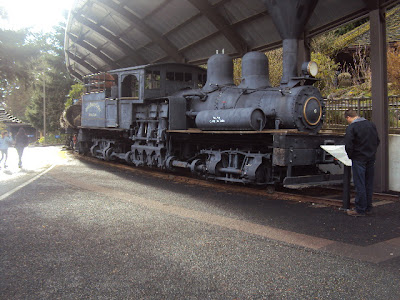