Third day, Sunday! We woke up a little later, 9:12 or so. I just laid down in bed, reading twitter and enjoying the natural light that poured through the blinds. It was the second the last day we would spend there. I told Kirsten my weird dream about me being a journalist and celebrities cheating on each other. It was a very weird dream. Everybody started getting up and Dan started to make breakfast. Sunday morning, we had omelets! We used the left over fish for our omelets, and fish omelets are so good too! I had bacon on the side, and some cantaloupe. I, of course, had my hot chocolate with coffee and I had some strawberries with my breakfast. I forgot to take pictures of the breakfast... :( it was really yummy though. Since it was Sunday, Meg did a little devotional. It was very nice and it was a devotional on my favorite Bible verse. It was very cool! After breakfast, we got ready to go on a hike. We were going to hike down to the river again, but go farther. We wanted to find the geocache that was hidden in the rocks near the river. We were excited to find it. We got all ready to go, and hiked down to the river, and a little farther than last time. We came upon this big rock, I knew the geocache wasn't there, but the colors were cool! A nice hiding spot for a game of hide and seek, maybe? 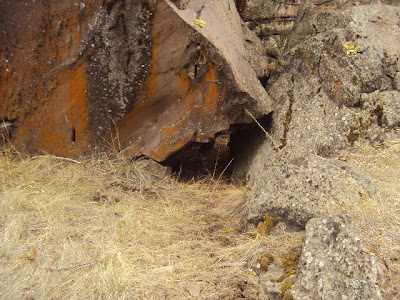 We hiked further, and came to this little clearing and sat down, waiting for Cambria, Vanessa and Dan to catch up with, (Kirsten, Meg and myself). They made their way to the clearing, and we hiked upwards. Onwards too, yes, but we hiked up towards the rocks. That's where the geocache GPS said it was. We got up to the LONG wall of rocks and I began to go search crazy. I really wanted to find the geocache. Then Dan told us more about what we were looking for. A different kind of container and it was fragile. I searched way farther than I needed to go. When I was tired of searching, I went to back to place where I started at the  rocks, and Dan said he had found it, but wanted all of us to have a chance to find it. Cambria crawled up the rocks and said she had found it. I crawled up to where she was at, and found it myself! It kinda creeped me out at first, considering it was a ceramic hand coming out of the rock... 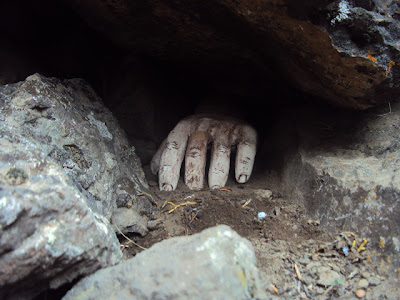 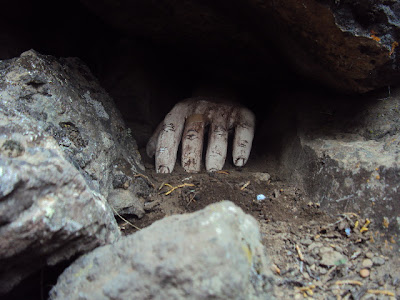 The geocache is called, "Give Kade A Hand" or "Cade"   not sure what the spelling is... but that's what it's titled as. I reached in and grabbed the geocache. Then Meg wanted a picture of all of us holding it... sadly Kirsten wasn't with us when we found the geocache and took the picture, but the rest of the girlies were there! My hair looks gorgeous! :\ 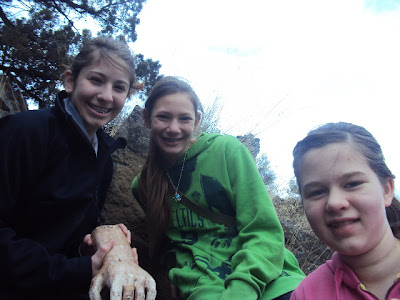 Inside the ceramic hand geocache, there was this tube... 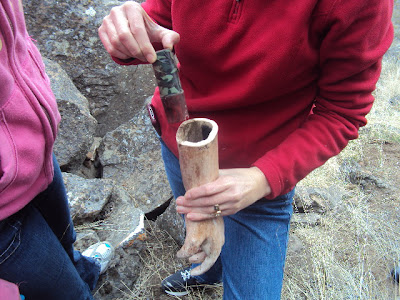 Inside the tube was a roll of strips of notebook paper... rolled up.... and it had people's names on it, proving they were there. We all signed our names to it! Sometimes in geocaches, you can trade things... like take something out and put something in, a trade. But this one was cool! You just had to put your name if you wanted to. And I did! I dated it, and put my name! 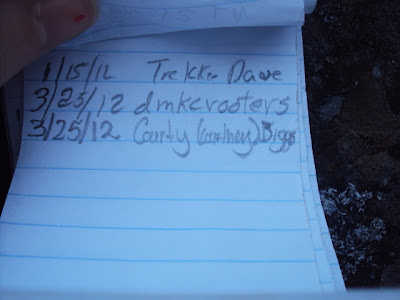 We hiked back down, and there was guy following us... well first he asked us if the trail went through or just stopped up ahead... I said it stopped because I didn't remember if there was more of the trail, or if it stopped, since I didn't get a good look and I didn't hike the rest of the trail.
We got up to a bench and waited for Meg and Dan, since they were far behind us, and I wanted to take a picture of my boots, I thought it would be cute. 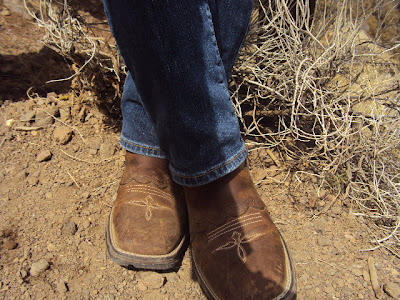 We walked back home and watched Say Yes To The Dress a bunch and ate some healthy snacks for a mini lunch. It was nice. Meg and Dan went into Sister's OR, and shopped around by themselves.
When they came back, Meg took the younger girls to the pool and Kirsten and I stayed at the condo. I started another book, and just sat and looked out the window and listened to some music. It was nice, quiet and relaxing time.
When the girls got back from the pool, they took showers and then we decided to go rent a couple movies from Red Box, and Kirsten wanted coffee, so went to Bend. We went to three different Red Boxes, trying to decide which movies to get. We finally decided on TinTin and A Midnight In Paris.
I didn't get coffee from Dutch Bros, I am not a big fan of their coffee.... gives me stomach aches.
The sky was sooo pretty on Sunday night! 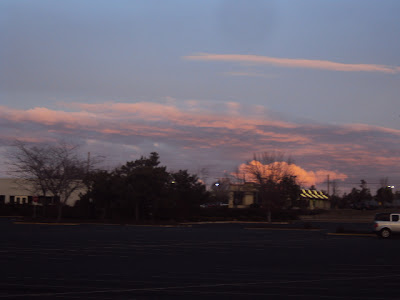 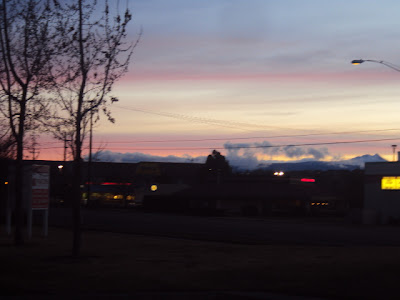 After we got the movies and Kirsten and Vanessa got their coffee, we went back to the condo and Dan and Meg made spaghetti. Kirsten and I helped make the salad.
I didn't take pictures of this dinner either. I was getting lazy with my picture taking.
After dinner, we settled down and I drank hot chocolate and we watched TinTin.
We went to bed early that night, it was a long day!
Fun, but long!
Labels: A Midnight In Paris cowgirl boots Geocaching hiking hot chocolate spaghetti Sunsets TinTin