On the second day, Saturday, we woke up at 8:30, got up and went into the living room. Cambria and Vanessa were talking and Kirsten and I decided to turn on the TV. Nothing good was on TLC, so we found The Nanny, starring Fran Drescher. I LOVE this series. It's so cute. While we were watching The Nanny, breakfast was being made. Dan was making French Toast! I love French toast! So tasty! When the breakfast was made, we took our plates to the kitchen and served ourselves, sat down and began to eat and watch The Nanny. 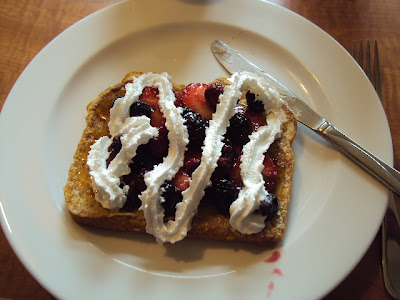 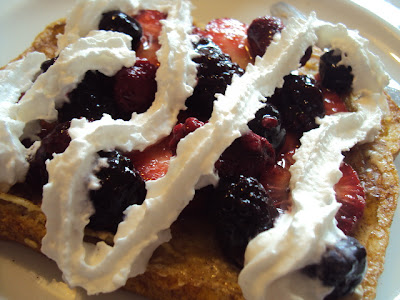 This morning, I also had dark chocolate hot chocolate, but this time, I drank half the cup and mixed coffee with the rest. Like a mocha type thing. 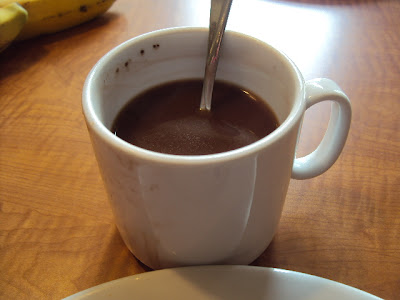 After breakfast, we all helped clean up. We had to pack up all our stuff too because we were switching condos that day. We had to be out of there by 12. While we were waiting the people to get there and move our stuff for us, Meg and took us girls on a little hike down to the river. It was a nice little hike, good exercise to start the day. 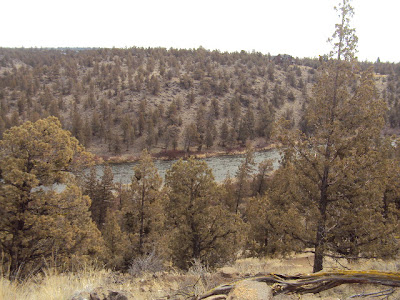 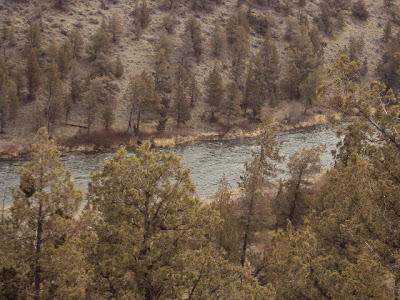 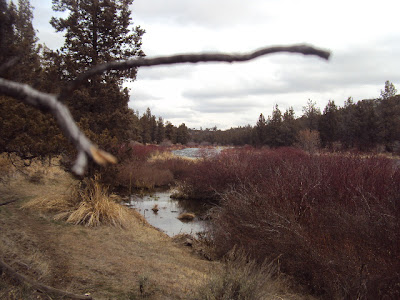 After we came back, everything was situated for us in our new condo. The cleaning lady was there and we moved all our stuff into the new condo. I didn't get pictures of the condo :( wish I did. This condo was a little more open. After everything was settled, we got back into the car and headed for Bend.
We went to the little outlet of stores, not an outlet mall, but just outlet stores. There was a Trader Joes there where we were going to get dinner stuff for that night. Kirsten and I wanted to get a little snack to tide us over til lunch. 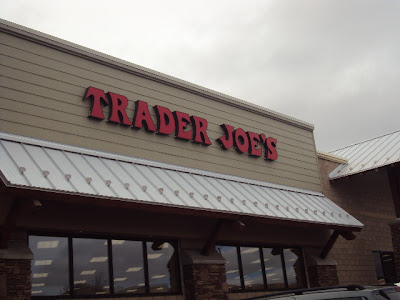 Kirsten and I wanted sushi. I love sushi! We found the sushi, and picked out California Rolls. 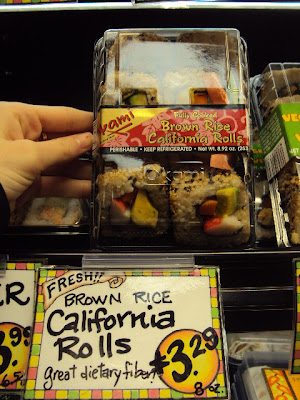 (This is a better picture taken in the car) 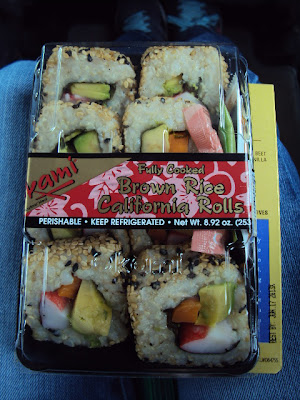 We were also potentially going to a movie that night too, with some friends of Kirsten's family that were coming up from Sisters. Kirsten and I didn't want to spend money on pop corn and things, so we got a little movie snack, a sweet treat for the movie. 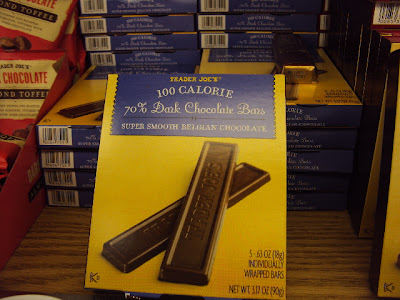 Some yummy Belgian dark chocolate. We walked around the store some more, and they had some samples.
I didn't catch the name of this, I just grabbed it and turned my back so I could quickly take a picture. I am all of a sudden embarrassed to take pictures now... but I shouldn't be. I'm a bold, proud blogger! 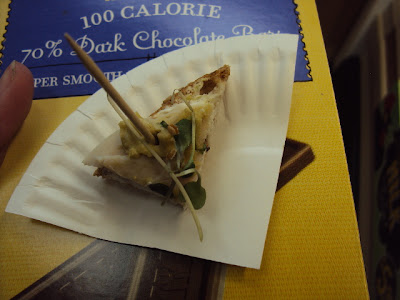 After we left Trader Joes, we dug into the sushi and I saw that the sushi came with some sauces. Some minced onion, soy sauce and wasabi sauce. I wanted to try the wasabi sauce. I knew it was spicy... but I didn't know it was SPICY HOTTT. I squeezed some wasabi sauce on my sushi... 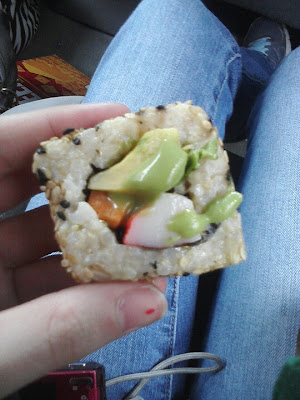 ....Shoved it into my mouth and almost exploded! I was slapping the car door, shouting, "NEVER NOT AGAIN!" And I wanted to die. The feeling was so intense and my nose was probably eternally relieved of ever not being able to breathe. It was so shocking and surprising. I wish I got it on tape... but to re-in-act the scene wouldn't be the same... it wouldn't be natural.
For lunch, we went to Subway. I finally got to use one of my many Subway gift cards! I was excited. Kirsten and I shared a foot long, a BLT on flat bread.
Right next door, adjoined actually, there was this store called Ponderosa Coffee House & Frozen Yogurt. We all wanted frozen yogurt and Meg and Dan wanted coffee. I got chocolate frozen yogurt and topped it off with M&M's and Peanut Butter cookie dough. 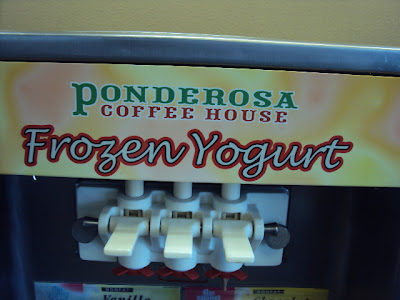 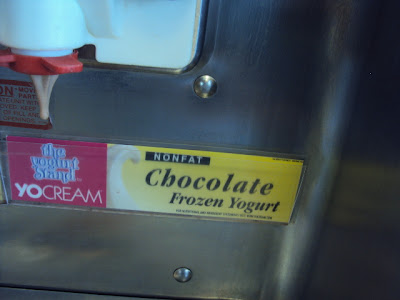 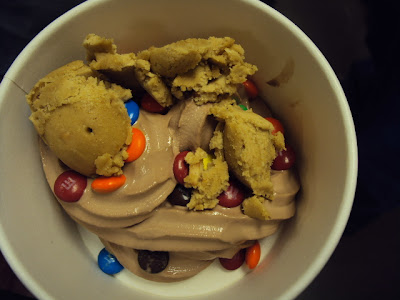 I was ready to pay for it, but Meg and Dan said it was their treat. I said thank you to them, of course! HOW NICE! It was very nice. Kirsten, Cambria, Vanessa and I all sat down at a table and we ate our frozen yogurt.
The picture came out cute! Cambria is smiling folks... Cambria is the one on the far right. Kirsten is in the middle. (Cambria is in the pink) And yeeessss, that is a Hunger Games news paper.... 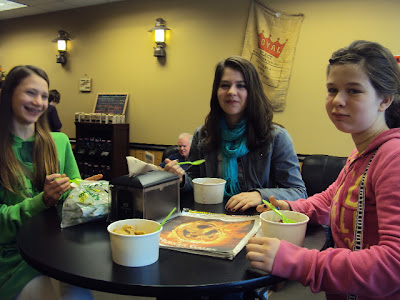 Again, my frozen yogurt. It was SUPERB! Retro spoon! 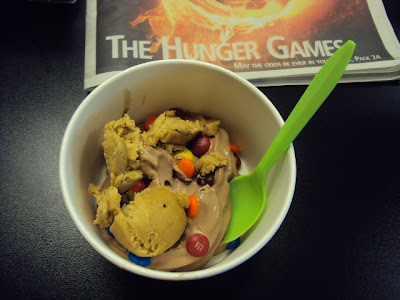 We went to a couple other stores after our frozen yogurt, than went home, or to our condo. The new condo. We all helped with making the dinner. Fish Tacos! Homemade fish tacos!
I cut up cucumber and Kirsten cut up the mango for our mahi mahi fish tacos :)
This has Mango; Cucumber; FRESH Basil; FRESHLY SQUEEZED Lime juice; and olive oil. 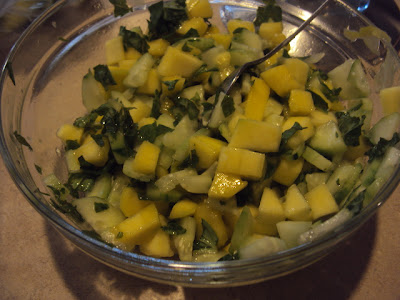 Kirsten's family friends came over and had dinner with us. We were all confused on what we were going to do... movie or swimming? We decided that later. As we all helped make the dinner, we were all talking. The mom of the other family burnt the rice and it was boiling even when we put it side in the patches of snow. It was great! HA!
Once the catastrophe was over, we prayed and started dishing up the dinner!
I wrapped my taco in a whole wheat with flax seed tortilla. It was super good!
I put the mango cucumber mix with tomatoes; fish and salsa in my taco. 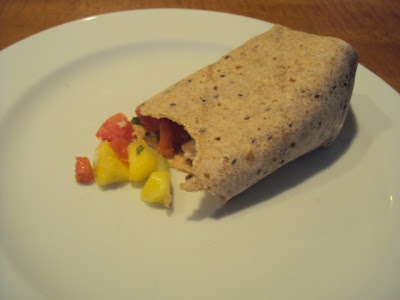 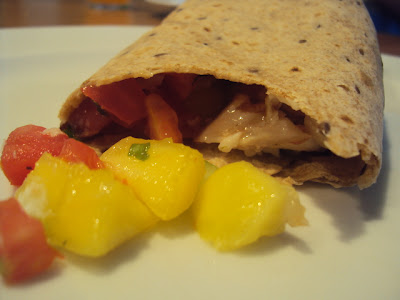 SOOO GOOD. I have never had fish tacos before, so this was a first for me. What a great first it was! Fish tacos are so good! After dinner, we just sat around for a little while, talking and getting know each other. I had never met these people before, so it was interesting getting to know them.
We decided nothing good was playing at the movie theatre at the times we wanted, so we decided to go swimming instead.I think that was the best choice! I really didn't want to pay $7 for a movie ticket... especially since we were going to go to Sister's the last day, and there would be lots of shopping opportunities. Swimming was good. Kirsten and I didn't actually go swimming, we just sat in the hot tub which was great!
After swimming, the other family left and Kirsten, Cambria, Vanessa and I all went to the main lodge to pick out a movie. We got another free move pass. We picked out Mall Cop. I know it's a silly movie... but it's just way funny! We snacked on Cheez-Its, and Oreos and different little snacks. Did some laundry, took our showers and went to bed. This time, Kirsten and I got the living room as our room. I slept on the Murphy bed and Kirsten slept on the couch. Cambria and Vanessa got the bedroom with the comfy beds. It's only fair. We got the beds the first night. Surprisingly, the murphy bed was quite comfy!
It was a great day! Lots of cultured food :) and sweet treats!
Labels: fish tacos french toast frozen yogurt hiking hot chocolate hot tub mahi mahi Mall Cop Ponderosa Coffee House subway sushi swimming The Nanny TLC Trader Joes wasabi sauce