It's been a while since I last posted, almost 2 weeks! Well, I have a lot to catch up. I have started training for track, going on runs and doing various little workouts at home. Last week, I went on a run and a hike! My dad brought up the hike on Friday, saying we could go with my Uncle Randy and 'almost' Aunt Aimee. I had my Thespian Regionals competition on Saturday that lasted all day, so I didn't really want to go on a hike on Sunday when I first heard about it. After the competition, and a good night's rest on Saturday night, I decided to go on the hike with my dad, but my Uncle and Aunt Aimee didn't end up going. It was just my dad and myself. I absolutely love hiking the trail around Wahkeena falls. That's basically what it does, the trail literally wraps around the falls. It's really neat.

When you hike the 'mini' trail up to the bridge, the misting falls is so pretty to look at. I have posted pictures of this before, but I can't get over how beautiful it is. 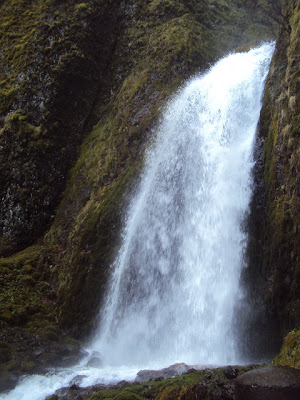 When you stand on the bridge, you get a misting of the fresh falls water. When we go hiking here in the summer, the misting is nice on a hot day.
As we walked on, we went higher and higher up. I wanted to take a closeup shot of the moss on the rocks. Pictures of moss on rocks are just really pretty, so I wanted to try to achieve that. Looks somewhat like a sea creature. It's pretty though. 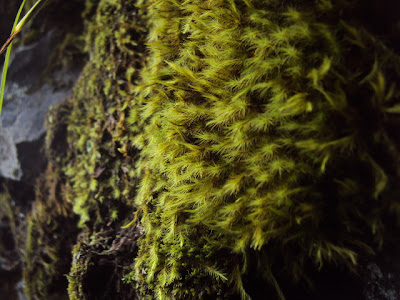 My dad was looking forward to running into some snow up on the trail. And that we did. We hit little snow patches that have somewhat 'hardened' due to the various people walking on the snow, and the cold and such. It wasn't very cold, the higher we went, the warmer it became but that is where we saw most of the snow. Higher up. 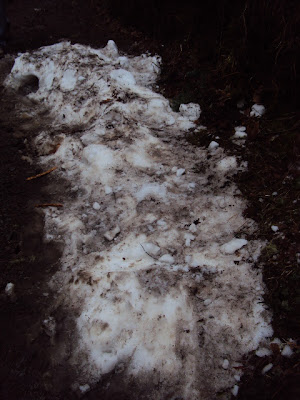 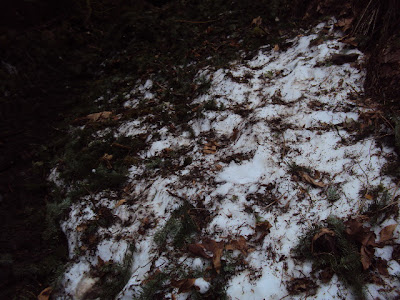 This is a picture of little snow chunks on the edge of the of the rushing water. 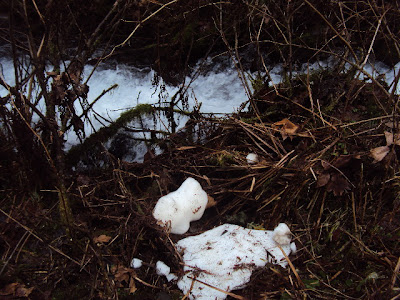 This isn't snow (below), just dew on a little web. Close up shots are very cool, and I always try to get my camera to do a nice focus shot, I was pretty proud of this picture... It's colorful. 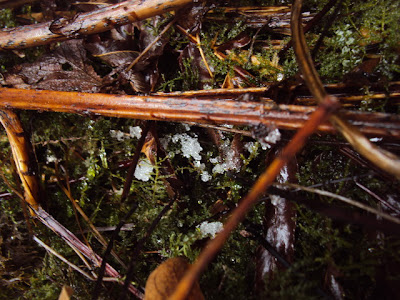 We past a lot of pretty falls on the way up the trail. We have hiked up to 'third' fall, and that's it for the summer, where we sampled the waterfall water. That is the cleanest water you will ever taste if you ever go up there. It's such a crisp, clean taste. It's very good water. But we hiked higher up this time, and saw many beautiful falls. 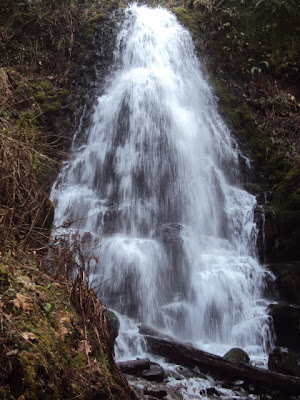 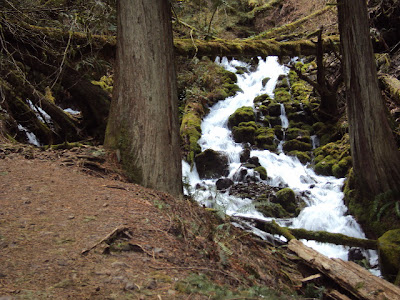 On the way up, we passed a spot that would be access to the water. I brought a water bottle to collect the water and drink it on the hike. I collected a small amount on the way up the falls, and filled the water bottle completely on the way down. This is the first time I filled it up. 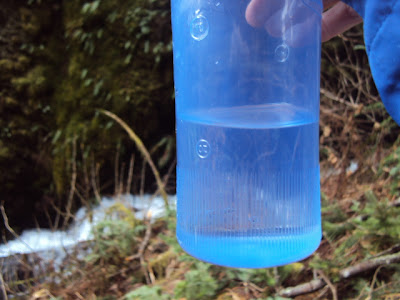 This little water fall was cool, it split in between the trail. My dad wanted to take a picture of me up on the trail, in between the falls, but I didn't want to have my picture taken, so I took his picture instead. I asked him to hold my water bottle while I took the picture. It's not a very big falls, but it's a little trickle. :) 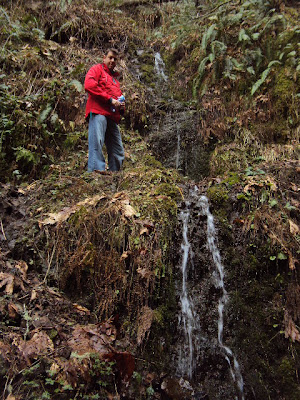 We hiked all the way up to Wahkeena springs and almost to the Columbia River highway. We only had about  4.8 miles to go. But I was tired, and hungry and had a little bit of homework left. My dad it was cool to see the signs. You have to be there to actually see them up close and it's pretty cool. Yeah, wooden signs... boring? Not so much. 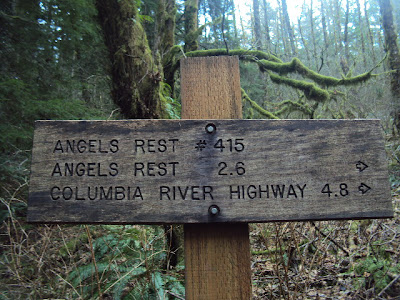 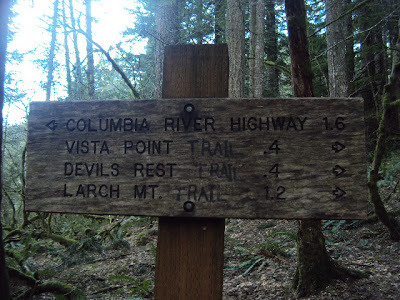 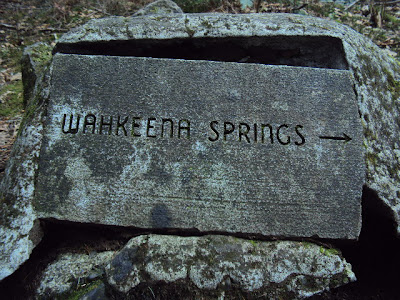 The springs were kind of cool, especially since there was snow almost everywhere! 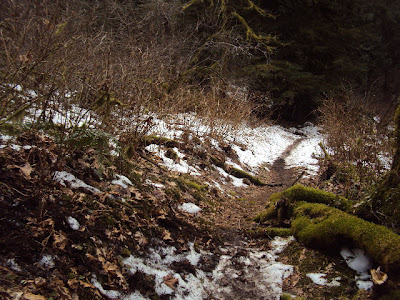 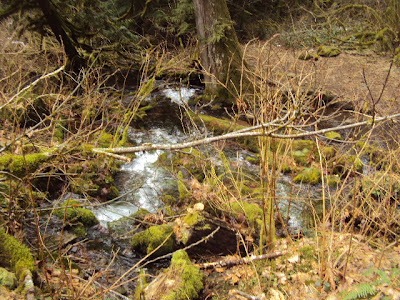 My dad standing near the snow... 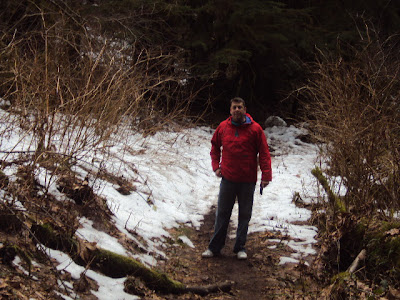 Another part of the springs... 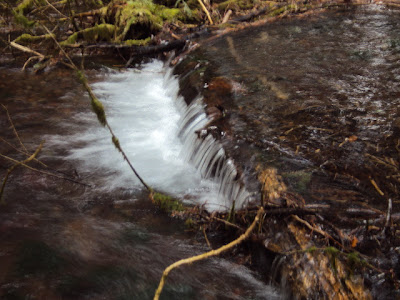 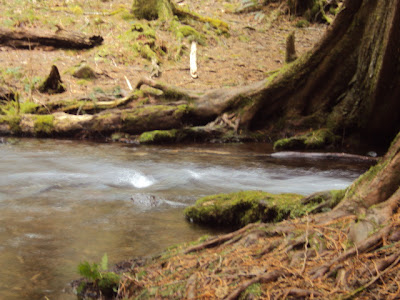 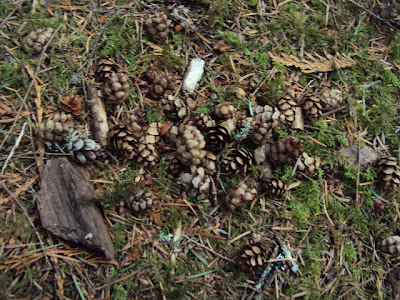 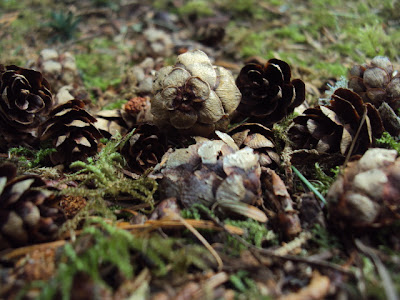 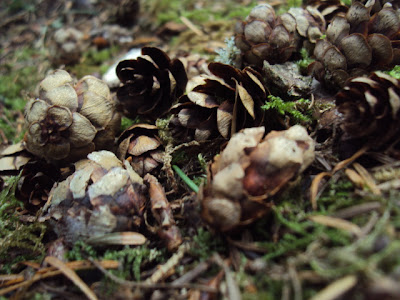 One the way down, it took us only 45 minutes to get from the springs to our car. It took about two hours to hike up the trail because hiking up hill takes longer than hiking down hill.
We stopped by Multnomah Falls to get a snack. Multnomah Falls is probably the most visited falls in the Columbia Gorge. It's so pretty! There is a restaurant, gift shop, snack bar, espresso cart. I went straight to the coffee cart, booth thing and I looked at the pastries and of course wanted one, so I got the very yummy cream cheese danish. 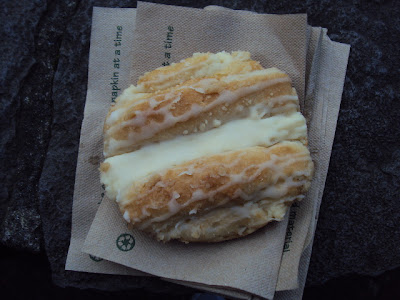 The hike was very nice, and afterwards, we drove to Target and I got a new hair product which I will post a review on about it today! I love hiking and visiting the falls in the Columbia River Gorge, one of the many beautiful things about Oregon.
Labels: hiking Multnomah Falls pastries pastry Snow Wahkeena Falls