In History class, we just got done with the Progressives, or Gilded Era. Gilded means covered with gold, and that is exactly what this means. It may have looked beautiful and amazing on the outside, but when you look inside, and actually see the ugly underneath, it's fake! Gilded is a perfect name for this time, the 1880's-1920's. Industrialism shot up, factories were put in crowded cities, large families living in tiny, filthy tenements, violence struck city streets, human feces flooded the ally ways and public streets, it was unhealthy, unsafe, and certainly not a place that people should be living. Of course, the rich didn't seem to have a care in the world about the immigrants and the poor suffering like this. Even on the job, it was dangerous and unhealthy. Treacherous work paid very little, not even enough to support a large family. You would see children working the large machines, and those machines were large equipment, they weren't built for children, they were built for adults.

In History class, we had to pick a topic of what we learned this unit. My topics were Margaret Sanger & Jane Addams; Women's Christian Temperance Union; and Women's Suffrage. It was all under SOCIAL JUSTICE.
Margaret Sanger was a woman who felt that the women of America needed to be free from withering away to nothing, meaning: No More Unwanted Pregnancies. After her mother died of having 18 pregnancies in 22 years, Margaret Sanger wanted to help other women prevent this. She spoke publicly of sex and birth control, got arrested in several different countries, but still kept on and wanted to warn the women and wanted to take a stand. She was remarkable woman. Jane Addams is under the same title, only she educated the poor and immigrants. She was the creator of the Hull House, or a Settlement House. This offered free classes to the poor and immigrants, helping them learn how to sew, make posters, cook, almost anything. It also provided a safe environment for mothers and their children, so it would keep them off the streets. The Hull House also dedicated itself to be a small children's hospital, the women who volunteered gave the immigrant and poor children the medical attention they needed. These two women made a huge impact on family planning and basic home help.
Women's Christian Temperance Union did so many things! I only picked three out of the tons of things they did. I did Pure Food and Drug Act; Banning The Use of Alcohol and Tobacco, and Equal Work for Equal Pay! Those were some interesting topics. Pure Food and Drug Act is what makes us feel like we don't have to inspect our food before we eat it. If you have ever heard of Upton Sinclair's book, The Jungle, or have read synopsis of it, you might gag or be appalled, or both. I was. It's pretty disgusting how the men worked in the meat packaging/meat processing factory. Glad to know there aren't any more rat droppings in my Cheez-It's. The Banning of The Use of Alcohol and Tobacco, this one is funny. The Women of the WCTU thought alcohol was the reason the families were poor and the reason why the women of those families were being abused and left beaten up in their homes. They made the act known in some states, but in others it was unheard of. The WCTU had some pretty neat art too. I included pictures of their artwork in my brochure. The next topic I discussed within the WCTU section was that there should be Equal Pay for the amount of EQUAL work you do. Equal Work for Equal Pay.
Women's Suffrage was the next topic. Women's Suffrage was the time that the women were fighting for the vote. It was pretty impressive how large the protests got.
Doing this project was a lot of time, a lot of work and took up a lot of time, but it looks awesome and I turned it in yesterday. Hope I got a good grade. It's probably Triple A work. :) 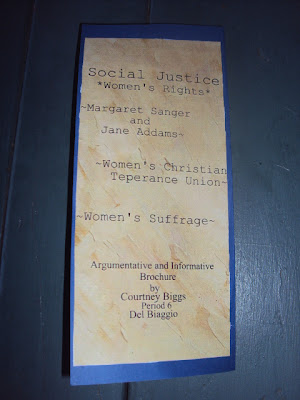 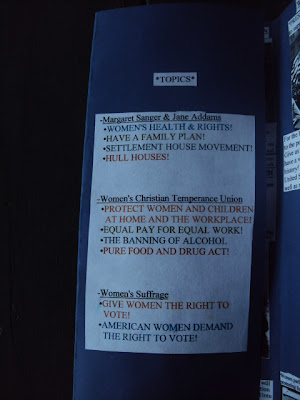 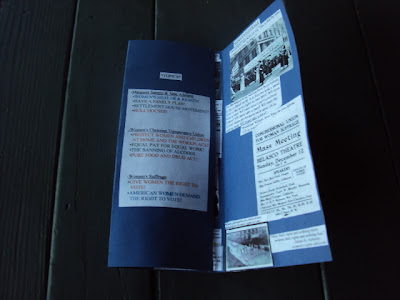 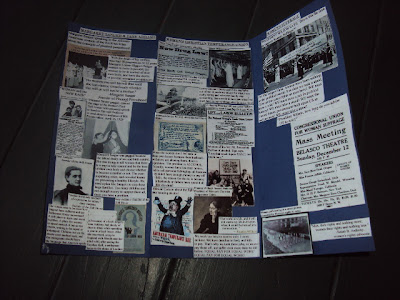 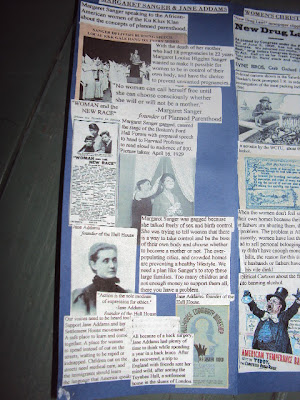 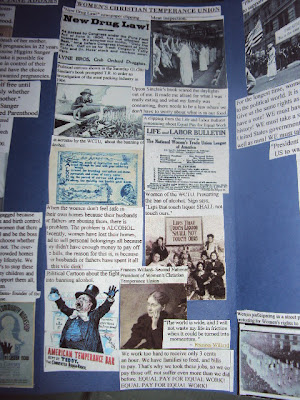 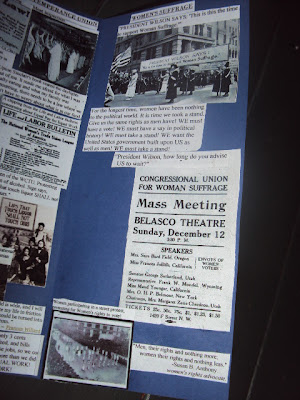 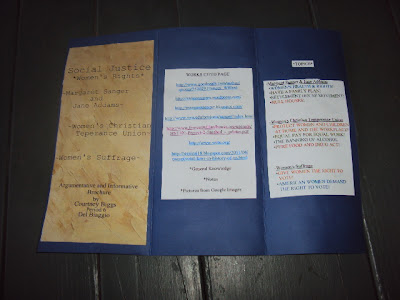 I love making brochures and things. I love history projects like this. I was, at first, really nervous about this project. Worried I wouldn't do a good job, or I would pick a too broad of topic. But this was really easy and  I enjoyed it very much! I was done two days before it was due, and that was nice. I was ahead of the game. I like being ahead. :)
Labels: brochure history history class history project Jane Addams Margaret Sanger U.S. History WCTU Women's Suffrage